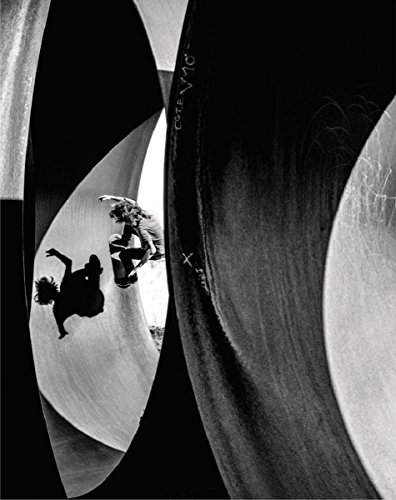 “His skaters are akin to acrobats poised in midair, neither ascending nor falling, but perfectly pictured in a world of their own.”

Fred Mortagne: Attraper au vol (Caught in the Air) is a kaleidoscopic perspective of skateboard acrobatics being caught in action. Mortagne is fascinated by skateboarding, but his fascination goes far beyond that of being a mere spectator to sharing his sense of weightless liberation and showing us what it is like to be caught in mid-flight. It also extends to catching people in midstep or daredevils jumping from one outcropping to another.

Mortagne began skateboarding at the age of eight, and later as a young skater inspired by seeing VHS skate videos, began shooting his own videos in the mid-1990s. Years of hard work led him to film some of the top skateboarding professionals of the world.

But as a practitioner of the art he realized, “that the still photographers present with me on the skate sessions would not shoot certain things that I could visualize in my mind, that I believed were interesting. That was the precious insight that informed me I could shoot pictures that would be different than others.”

That fascination, which evolved into a passion for photographing skateboarders, is fully presented in Attraper au vol. The photographs capture the excitement and daring of the skateboarders as well as the underlying aesthetic perfection that is visible only to spectators. His skaters are akin to acrobats poised in midair, neither ascending nor falling, but beautifully pictured in a world of their own.

Mortagne is a master of composition, with shapes in the foreground that direct the eye to the action. All of his images are high-contrast, grainy, and black and white, framed to accentuate motion by means of repetitive patterns, reflective walls, or unusual perspectives. It is one where humans, although small in the picture, are definitely the key component of the drama.

His passion for action images extends beyond people “floating in space” to abstract environments that also elicit movement or motion via architectural forms that sweep us along to the human element.

His skaters exist in a world apart. His overhead perspectives are aerial shots that isolate his subjects against abstract backgrounds. One imagines that when he arranged time with his skateboarders to capture their flights they were arranged in places where they would be less disturbed. But does that not also make a statement of how he views their place in the world?

The publisher, Um Yeah Arts, has done an excellent job of printing and binding this book. It is a keeper. The heavy weight of the paper, the excellent ink coverage and nuanced gray tones make viewing the photos a pleasure. The layout of the book’s photographs, often a two-page spread, are commanding and intriguing.

Much less intriguing and downright disappointing is the book’s text layout and design. The text on the essay pages is much too small for the 30 percent gray ink that was used in its printing. It is hard to read and the single 7.5 inch column width on the page is too wide, allowing the eye to wander to the next line. While 30% gray type may work really well on web pages for the Internet where they are illuminated and additional contrast is gained, they are a big mistake for a book. Unfortunately, the poor design makes reading Mortagne’s fascinating story a chore.

Despite all this Fred Mortagne’s Attraper au vol (2000–2015) is a wonderful book for aficionados of black and white photography.