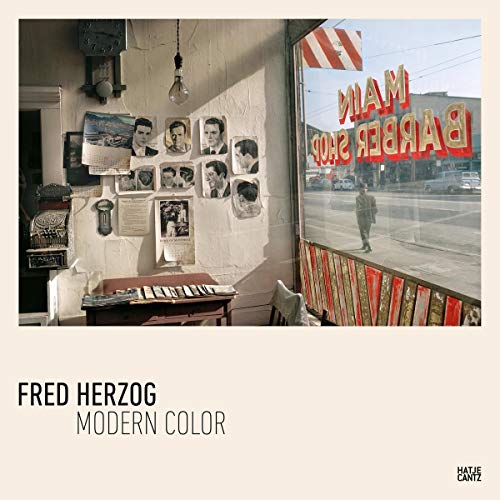 Fred Herzog’s images in Modern Color were created over 50 years ago and still have the power to stop you in your tracks. His use of color and Kodachrome’s ability to capture distinct hues of bright reds, muted greens, and the misty blues of Vancouver play a big part in the compelling quality of Herzog’s images.

“Fred” was born Ulrich Herzog in Stuttgart, Germany, in 1930 and immigrated to Canada in 1952. Fortunately for him, Kodachrome, which had begun being sold by Kodak as 35mm transparency film in 1936, became the perfect medium for him to express his visual sensibilities. Herzog had moved to Vancouver in 1953 and finding it “engagingly seedy and colorful” began photographing his adopted city with his new 35mm Leica “still” camera.

At work at St. Paul’s Hospital as a medical photographer, Herzog worked in a carefully applied manner; but after work he savored his photographic creativity in a way that liberated him from darkroom tedium and the world of black and white.

Kodachrome was a very fine-grained, sharp, extremely color-saturated film, and Herzog took a painter’s approach in using it. He used color in a bold, graphic way that displayed a firm grasp of form, intricate detail, line, and composition. Orange Cars Powell (1973) is an example of using color to create balance, where the large swath of reddish orange on the top left corner (apartment building facade) is echoed by the two orange red cars in perspective, staggered into the foreground with a near silent, muted blue that balances the upper right.

Although all or most of Fred Herzog’s work was shot on the street with available light, it is not what is typically considered street photography. Juxtaposing his work with the quintessential street photographer of the period—Henri Cartier-Bresson, who also worked with a Leica—Bresson shot in black and white, striving to capture the fraction of a second, the “decisive moment” when an action was revelatory.

Herzog shot in color. His work is contemplative but also spontaneous. The work of someone dedicated to timely observation. “. . . a realist committed to the gentle mastery of naturalistic framing and timing.” He would often walk and revisit areas of Vancouver that were more “interesting” eschewing the nicer, more demure districts. He felt that “new, clean, safe and honest neighborhoods do not give rise to interesting pictures. . . . photographers hope to discover the . . . disorderly vitality of the streets; the street people on the corners and plazas, in billiard parlors, pubs, and stores, where shoppers, voyeurs and loiterers feel at home.”

His images in the book Modern Color proclaim him a colorist and a street photographer fascinated by the odd details of people’s behavior. His photographs are insightful glimpses into human nature and more akin to Edward Hopper’s paintings than photography.

For instance, the tame barbershop drama in his photo U R Next (1959) is understated and yet intrigues us into reading the expressions of the two men, the barber and his client. Or the near comical non-interaction of Man with Bandage (1968) in which a prim older woman judges the appearance of a man in a sleeveless undershirt flagging a cab, hand bandaged, sporting bits of paper on his face from a bad shave. Or the curiosity provoking Chung Wah (1960), where the back of a workman in his highly detailed plaid winter coat and beat-up sweat-stained hat, is seen as he gazes at the Chung Wah store display window. It is slightly out-of-focus, and filled with black and white prints showing scenes from motion pictures.

Herzog also displays a painter’s sensibility in how he handles color and form as in Pepsi Corner (1964) with large muted and nearly monochrome areas contrasted against a bright logo; or the image Old Man Main (1959) by juxtaposing the person walking into the frame against a geometric multi-hued background of store fronts. In CPR Pier & Marine Building (1953) he uses the rich yellow flat planes at the rear of apartment buildings receding in severe geometric perspective as ghostly forms of other buildings above in the distance fade into a bluish gray fog.

Modern Color is expertly printed by Hatje Cantz on semi-matte paper, making it a pleasure to view the vivid reproductions. Vancouver historians also will enjoy this book in that it provides somewhat of a historical record of the city from the 1950s through to the 1970s.

Jeff Wall, another Vancouverite and photographer, makes an excellent point about the fleeting character of cities in his essay, Vancouver Appearing and Not Appearing in Fred Herzog’s Photographs, when he states that Herzog “capture[d] with gentle affection those streets, doorways, backyards, and shop windows. . . . The only problem is that those objects of his affection no longer exist, they are just vestiges of what they were in 1957 or 1961, when he captured them perfectly.”

Fred Herzog’s Modern Color is a testament to the flexibility of street photography as fine art, to the use of color at a time when black and white was considered to be the only socially acceptable form of the art, and a tribute to a vanished city rooted in a period of time that no longer exists.