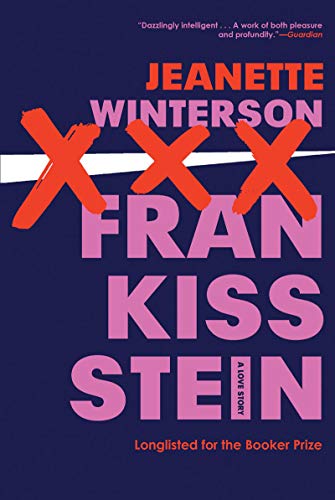 Frankisstein by Jeanette Winterson is a novel that is also a metaphor. In the present, is the mirror for the past, two parallel story-worlds in which the same thing happens, except not really, not exactly, and arguably, when tone, ambiance and context are taken into account (because we are talking about a work of literature), not even close.

Set in Lake Geneva in 1816, one world follows Mary Shelley in the days before she created the gothic horror classic, Frankenstein, and the prose in this half of the book is vintage Jeanette Winterson, wondrous and vivid, a romantic mix of proper and outrageous that faultlessly mimics early 19th century English Literature.

“Here I am, in my inadequate skin, goose-fleshed and shivering. A poor specimen of a creature, with no nose of a dog, and no speed of a horse, and no wings like the invisible buzzards whose cries I hear above me like lost souls, and no fins or even a mermaid’s tail for this wrung-out weather. I am not as well-found as that dormouse disappearing into a crack in the rock. I am a poor specimen of a creature, except that I can think.”

The other world of the novel is set in the present and follows Dr. Ry Shelley, a transgender man attending an artificial intelligence conference on an invite from Victor Stein, a proponent of AI who has an electrical scheme for creating a human-like being out of, well, a human being. This narrative arc is also vintage Winterson, fearlessly feminist, if also limitlessly crass in its proselytizing and in its testing of the boundaries of plausibility, as in this spew-inducing scene in which Dr. Ry interviews the owner of a company that sells and rents sex dolls.

“With a rental, every girl gets hygiene-checked, bathed, perfumed, yeah, you can choose one and four scents—musky, floral, woody or lavender. When you pick her up she’ll be wearing either double-denim like this one – or a simple day dress. You can hire or buy other outfits.

And herein lies the challenge of Frankisstein. There are two interesting stories within it, each with its own exquisite language (in the sense of how well they are suited to the author’s purpose for each one of the novel’s two personalities), a literary feat in and of itself.

Both stories are engaging; one, rendering a fresh and romantic view of the often repeated tale of the competitiveness and rivalry between Lord Byron and Mary Shelley that led to the creation of Frankenstein.

The other, using something similar to slapstick to explore the psychological and moral quandaries of robots as replacements for a varying degree of human interaction, also not a new topic in literature, but one that feels fresh here thanks to the contemporary point of view of transgendered Dr. Ry Shelley, who, as you’d imagine, has thoughts on the challenges and opportunities of reengineering anything that is supposed to feel and think and exist in society.

And so we have here two characters trying to create their own Frankensteins in different times and under different circumstances. Two creators set to visit unknown consequences on the world they inhabit by putting their innovative zeal above all else. And great writing notwithstanding, the problem is that the two pieces are so incongruent that they clash even as they passionately work to convince you (or just to vent?) on political and gender arguments that should end up in the same place, disrupting the reading experience, sometimes, to unbearable levels, so that in the end, the result is one novel cobbled from such disparate pieces that harmony is impossible, Winterson’s novel, a literary Frankenstein of its own.