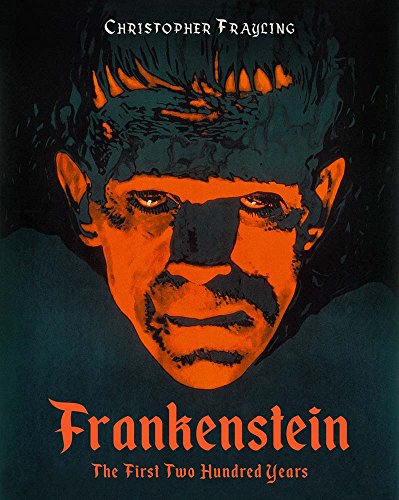 If Mary Shelley’s Frankenstein, first published in 1818, is indeed a novel more talked about than read, as Sir Christopher Frayling suggests in Frankenstein: The First Two Hundred Years, then it must be said that he has given us ample cause for further discussion, at the very least.

This attractive publication, released by Reel Art Press to celebrate the 200th birthday of the literary classic, traces the journey of the scientist and his monster from that famous night in 1816 when Mary Godwin told a portion of her story to a small gathering at a villa overlooking Lake Geneva to the status of modern cultural icon found in movies, television, advertising, comic books, and even cereal boxes and children’s toys.

Frayling begins with a synopsis of the novel. He then provides an introduction of the dramatis personae present when the 18-year-old Godwin, soon to be Mary Shelley, told her spooky story: Percy Shelley, then 24 and the father of Mary’s four-month-old son; George Gordon, Lord Byron, the 28-year-old celebrity author and “pretty boy”; Dr. John William Polidori, 20; and, Claire Clairmont, 18, described by Byron as “that odd-headed girl.”

Frayling then launches into an extended analysis of the thematic background of Frankenstein. Frequent lightning storms that month reminded Mary’s listeners of the contemporary science of galvanism, which proposed that tissue generated electricity. As well, the concept of reanimation of dead animal tissue was also much discussed at the time, not to mention the ongoing metaphysical debate regarding vitalism and the origins and nature of life. As Frayling notes, Mary was aware of these contemporary debates and comfortable writing about them in general terms.

While Frayling’s background study and his subsequent chapter covering the writing and publication of the novel provide an excellent scholarly analysis valuable to students and academics interested in the period, it’s rather dense and a bit of a challenge for the casual reader to get through.

What stops the presses, though, and provides a definite high point in the middle of the book, is a 10-page reproduction of the manuscript draft of the “creation” chapter of Frankenstein, which had been written in a notebook in the summer of 1816. To be able to read this key portion of the story in Mary Shelley’s own handwriting is a gift guaranteed to send chills through you.

The last chapter of text, entitled “I bid my hideous progeny go forth and prosper,” covers the critical reception of the novel, which was largely negative and occasionally misogynistic.

Frayling then plunges without notice into a survey of the popularization of the characters in theatre and film, and he wraps it up with a brief summary of the monster’s influence on subsequent productions ranging from Abbott and Costello Meet Frankenstein to The Rocky Horror Picture Show and television programs such as The Munsters.

At this point the text ends, and the second half of the book is devoted to “a visual celebration” of the monster. What a celebration it is! Remarkable photographs of Boris Karloff in the makeup chair and posing for lighting tests of the monster’s face; a knockout photo of Elsa Lanchester modeling Jack Pierce’s makeup as the Bride; an incredible assortment of posters and promotional material for domestic and international film productions; comic book covers; and almost anything else found in modern culture that bore the image of the monster.

Frankenstein: The First Two Hundred Years is a publication that pulls the reader in two opposite directions. The first half displays the depth of knowledge and scholarly insight that has made Frayling a prominent authority on Gothic fiction and horror movies. Unfortunately, the material is too academic and detailed for the coffee-table market the book will aim to capture.

Additionally, it should have been much better organized. In particular, the concluding survey of the monster’s ubiquity in modern popular culture deserved discussion in a chapter of its own.

The second half of the book represents what Reel Art Press does as well as anyone else in the industry: present a visually stunning collection of images that delight the eye and reanimate the imagination.

Editor Tony Nourmand and Joakim Olsson, art director and designer, have once again demonstrated why a book with R|A|P on the spine is a book you will want in your lap late on a stormy night, in front of the fire, when it’s time to indulge in a celebration of one of the greatest horror stories of all time.