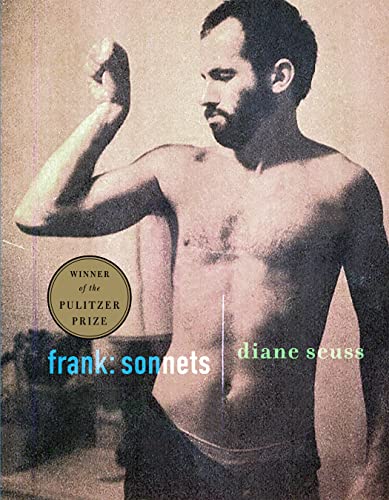 The sonnet is a difficult form in English. It was created for Italian poetry, and only imported in the early Renaissance. Since then, sonnets have become a byword for careful mastery of technique and linguistic tension. A finished, classic sonnet is beautiful and controlled, but in many ways a static entity, maintaining an unbroken link to the literary past. And then there are Diane Seuss’ sonnets.

The sonnets in Diane Seuss’ latest collection, frank, are consistent in their 14-line form, but they push hard against the form’s strictures and often break loose. The line lengths are even, but rarely follow iambic pentameter (or adhere to any ten-syllable meter), and the rhymes come via sound-echoes rather than perfect line endings. These are poems held together by the careful boundaries (no line longer than another, not one line more than 14) Seuss sets around the emotional minefields contained within.

frank is a nonlinear memoir in verse. Past and present overlap, beginning in the Pacific Northwest, as we overlook the ocean: "I drove all the way to Cape Disappointment but didn’t / have the energy to get out of the car.” Seuss positions herself on the edge of the sea, contemplating “that long drop from the lighthouse” with a tension that imagines “going to the Ocean / Medical Center.”  The enjambment of that line is incredibly powerful: in its first movement, the fantasy of death; in its second, the desire for help.

Suicide is poetry’s shadow, afflicted by cliché. The poetry of pain and death spewed forth by Sylvia Plath at mid-century (and so many writers before and after) seems a kind of end in itself. Writing in the presence of death is more productive (one returns again and again to Phyllis Webb’s “To Friends Who Have Also Considered Suicide”). Seuss’ poems move wryly between the shadow and the fertile plain. She begins at the edge of cliché, “The problem with sweetness is death. The problem / with everything is death.” Yet from there, she side-steps out of misery into memory and ironic play:

“There really is no other problem

if you factor everything down, which I was no good at

when studying fractions. They were always using pie

as their example. Rather than thinking about factoring

things down, I wondered what kind of pie. And here

I am, broke, unable to count to fourteen.”

There’s a real power and charm in this poem. Its metaphors fully sustain themselves, but they turn inside out, change their natures, comment on the state of the poem itself, then wander into the past, still muttering to themselves.

Some of the sonnets struggle against their boundaries. Punctuation evades whole blocks of lines, so that we must recite a litany of fears without pause for breath: “I feared ambulances / janitors knives dogwood blossoms my sister’s boyfriends one of whom / threw a knife at my head one of whom pressed his whiskers into my face”. That poem struggles against adolescent terror and the restrictions of childhood movement, of the body, and yet it never forgets its sonnet-hood, so that it staggers into line fourteen only to crash into its own single period: “my father not resurrecting I feared floating flying falling the lowdown.”

Seuss has created a technically exquisite, beautifully painful book. It’s a cohesive piece, not merely a collection of poems, and reading it is an experience of falling into a controlled flow of personal history and loss.