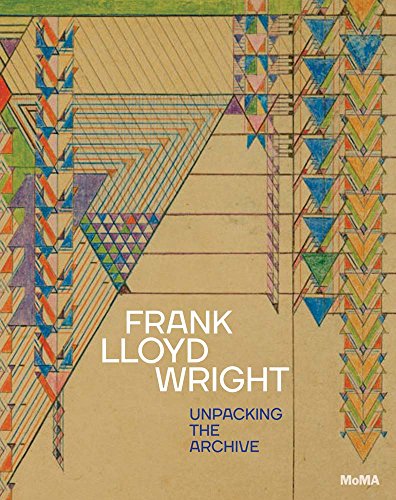 " . . .  new light on the diversity of Wright’s creative genius as a socially conscious architect, planner, and inventor."

When we think of a superstar American architect Frank Lloyd Wright immediately comes to mind. He designed more than a thousand buildings in his distinctive organic modernist style over a 70-year career, over half of them built. And his ego and colorful personal life matched his professional talents in promoting his celebrity status which lives on almost 60 years after his death.

Wright pioneered the Prairie School style of architecture designing iconic structures that were all about harmony with humanity and its environment. His legacy is a wide range of projects spanning rural and urban America shown in detailed plans for private mansions, public meeting places, offices, sustainable farms, suburban subdivisions, and innovative cityscapes.

Most of these prolific plans, drawings, models and manuscripts, along with myriad sheets of correspondence, photographs, and tapes are preserved in archives from Wright’s practice on his family estate at Taliesin, Wisconsin, and his workshop at Taliesin West in Arizona, which were acquired jointly by the Museum of Modern Art (MoMA) and Columbia University in 2012.

As part of a series celebrating Wright’s work on the 150th anniversary of his birthday and exploring the untapped riches in this treasure trove of records, MoMA is mounting an exhibition of Wright’s work at the museum, accompanied by an ambitious catalogue with wide-ranging essays, Frank Lloyd Wright: Unpacking the Archive.

Columbia Art History Professor and MoMa Curator Barry Bergdoll, who organized this exhibition with the assistance of preservation specialist Jennifer Grey, opted to depart from the conventional retrospective of Wright’s signature designs in favor of a presentation that is more of an anthology of his lesser-known work. This exhibit represents both the literal unpacking of the 55,000 drawings, 300,000 sheets of correspondence, 125,000 photographs, 2,700 manuscripts, and other materials in the massive archive and the trope of intellectually deconstructing the diversity and richness of the records.

As entry points, a group of scholars were invited to explore the collection each selecting one project plus some 30 items that would help explain its significance. The resulting exhibition consists of 12 sections, each curated by a scholar. This boils the archive down to some 450 works dating from the 1890s through the 1950s, many of which have rarely or never been on public display and remained unbuilt.

The idea, then, was to break away from the standard celebration of the organic formgiver’s greatest hits, which has been done many times before, by excavating the cobwebby interstices of the archive to shed new light on the diversity of Wright’s creative genius as a socially conscious architect, planner, and inventor.

The outcome is an eclectic, indeed eccentric collection with little thematic coherence on the surface, though all contributions have considerable heuristic value in terms of suggesting fertile avenues for future research.

Frank Lloyd Wright: Unpacking the Archive begins with three projects highlighting Wright’s organic approach to design though a holistic vision of nature, ecology, and community. As well as being known for his site-specific design, bold engineering, open plans, strong lines, and geometrics, he always had an eye for using natural materials as part of total landscape architecture. Less known is his interest in incorporating generic indigenous motifs and in designing with both native and exotic plants to complement the land.

Wright’s “Little Farms Unit” stands out here, an experimental proposal of 1932–33 in response to the plight of farmers in the Depression. Drawing on practical and spiritual lessons from his childhood experiences on the family farm in Wisconsin, Wright put together a model of micro farm units linked by roads to local processing and marketing facilities in sustainable symbiosis. The project never came to fruition largely due to the commissioning client’s financial troubles. But the project underscores Wright’s ongoing commitment to transcending rural-urban boundaries in search of more sustainable lifestyles following a model of organic architecture, community values and simpler yet civilized living.

The next section is devoted to culture, including Wright’s 10-year project for Tokyo’s Imperial Hotel, which draws on Japanese woodblock prints and pagodas. The section also contains an essay on Wright’s 1928 rather lavish design of a school for African-American children for the Rosenwald fund which the pupils were intended to help construct. The design was never built, but it illustrates Wright’s belief that a child’s imagination can be stimulated by architecture and that “School should be a happy place—even for the negro.”

Another section highlights Wright’s pioneering work on mass-produced design-built ideas in his Usonian Automatic System Project of the early 1950s. Here, Wright retooled the textile concrete block he had developed for commissioned Californian homes in the 1920s to allow do-it-yourself construction wherein homeowners would build their own dwellings using 12 standard shapes of blocks.

A section on the city explores a number of ongoing contradictions in the long career or this iconic urban planner who often appeared to dislike urban life, chafing at the constraints of the grid over the freedom to build in harmony with nature.

Wright’s Skyscraper Regulation Project developed a spatial network in a three-dimensional multilevel system which would have built towers in a ring around downtown with a raised platform to isolate people and grass at their center. A vocal critic of skyscrapers, Wright dreamed of building a mile-high Chicago tower which would be the tallest in the world and, ultimately, a monument to himself!

Another essay in this section, “Broad Acres and Narrow Lots” pursues Wright’s claim that the metropolis was becoming dysfunctional, indeed obsolete, with a breakdown of urban functions and civic meaning. Instead, he proposed Broadacre City (1929–35)—an Ursonian synthesis consisting simply of architecture and acreage.

“With its low density carpet of small plots, predominantly one- and two-story buildings and seemingly infinite territory, undergirdled by well-managed technologies, the ruralized landscape of Broadacre would sustain new levels of individuality and freedom, far more democratic than a traditional metropolis could ever support.”
—David Smiley

A final section concentrates on the archive itself, from the materials, techniques, and people engaged in the drawings, through the countless challenges of curating, conserving, and exhibiting the artifacts to visualizations of the geographic scale and scope of Wright’s work both within and without the United States. The latter is particularly valuable in anchoring Wright’s prolific portfolio in place and time and underscoring his world name recognition as well as his American idol status.

In sum, Frank Lloyd Wright: Unpacking the Archive is definitely more of an heuristic scholarly research resource for architects, art historians, urbanists, and curators than a coffee table catalogue introducing Wright’s prolific genius to those unfamiliar with his work.

While the essays are clearly written and tightly focused, the accompanying  architectural drawings, models and plans, although having their own beauty can be hard to follow for the uninitiated. Nonetheless, this hefty volume would be a nice library addition for general readers curious about American urban history and the key players in its design.

At the end, though, some might be left with the nagging feeling that this particular cow has been milked too often and that, like the lyrics of the 1970 Simon and Garfunkel song suggest, we are spending too long saying “so long, Frank Lloyd Wright”!