Francis I: The Maker of Modern France 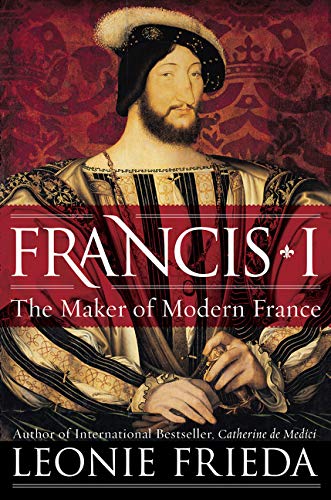 "Francis' 'achievements were extraordinary' in no small part from his 'Machiavellian skill that put his peers to shame.’"

Too often biographers exaggerate the importance of their subject, but Leonie Frieda seeks instead context and truth for Francis I (1494–1597), never the great or called the maker of France. The author intends "not to accept exonerate his many mistakes" or suppors "his own assessment" of his success, as "that was not borne out by action."

Francis I explores why this still important monarch's reputation has "suffered such a decline." His "foibles and drawbacks" and "failings and inconsistencies" reveal much about the beginnings of France as a nation than about this "deeply flawed figure" who had the ambition of conquering the Italian peninsula but who nearly lost France.

Frieda appreciates that this king had many critics, including the later Victor Hugo. Francis' "achievements were extraordinary" in no small part from his "Machiavellian skill that put his peers to shame" using the consul of his women—mother, sister, and mistresses—as common in the French monarchy. He marched an army over the Alps, became the famous last patron of Leonardo da Vinci, and remade European diplomacy forever.

"Had he acknowledged his errors, and devoted himself to furthering the interests of his country," the author argues, Francis I "would now be regarded as among France's greatest kings." He "was unable to leave the gambling table with his winnings" in politics and in war.

Ultimately, his failure "was the more regrettable as it was of his own making." The king came by his faults honesty, from a long line of French kings who ranged between just failures to true disasters. Historians described his successors much the same way.

An extravagant man who loved drinking, hunting, and sex, he could flaunt his Renaissance education and intellect when needed. The king collected great art, books, and ideas. Frieda argues, however, that Francis left a legacy of interesting historical events rather than of personal achievement.

Francis pulled his country together after the failures of Louis Xll "following a time of great dissent caused by the Hundred Years War and feudal infighting." Consequently, he inherited a country with "widespread poverty, economic disaster and social misery." It had "many languages" and "different laws and customs."

Failed Italian campaigns by his predecessor left the nation deep in debt. Diplomacy, "this mixture of intellect and force that Francis had to maintain with other European leaders," mattered as much as victories in battle.

The tools of favors, marriages, nepotism, pensions, and taxes mattered as much or more than arrows, lances, pikes, and swords. Francis' meeting with Henry VIII became historical spectacle. He ultimately failed, but he lived in an age of spectacular failures.

This contemporary of Henry VIII of England would rule as an absolute monarch, but “he wanted to be loved and admired by his subjects." His royal progression across the country would include 10,000 people and twice as many animals. The people believed "that he acted in both their interest and his own."

Most readers do not understand the "emergence of great nations from small independent states," a legacy from the Medieval World that emerged from the Renaissance. He, his mother, and his queen each ruled over different provinces of France.

This book is a great education. It will not work as a model for using the rules of grammar, but the reader will not notice in the lively colorful prose of this fast read.