Framing Innocence: A Mother's Photographs, a Prosecutor's Zeal, and a Small Town's Response 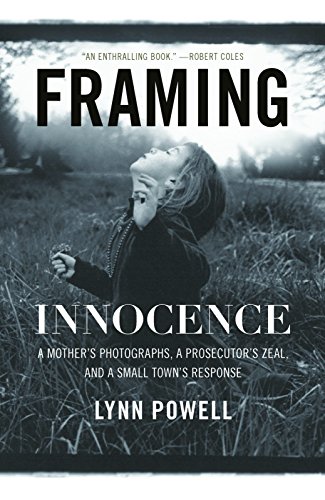 The title sets the stage for this closely documented telling of the case of Cynthia Stewart who boldly or innocently took nude photos of her eight-year-old daughter Nora one afternoon and sent them off to a photo lab in Ohio. A lab tech flagged them as possibly pornographic and sent them back to the Oberlin, Ohio, police department where police and Lorain County Prosecutor Greg White labeled them as such and in violation of Ohio law obtained a secret grand jury indictment against the mother.

And that’s how it might have played in your local news media—without context or understanding. If adding to a truth is a wrong, certainly subtracting from it is an equal fault.

Poet, neighbor, and friend to the accused, Lynn Powell has released the full truth of this celebrated case of our civil rights in this compelling story of persons, family, court, social services systems, and a town.

It happened 10 years ago in 2000, when parents Cynthia and David Perotta were raising Nora as a bright and healthy child in this Midwestern town. Cynthia, a school bus driver, independent thinker, and alum of an independent minded college town, had been documenting her daughter’s life through photographs from the day she was born. These images, of course, included bathing photos along with 35,000 others fully clothed and in natural settings.

Cynthia had studied photography and was an admirer of child photographer Sally Mann. She and Nora were close and had recently shared a photo exhibit at a local gallery. The day of the fated bath photos, it was Nora who had invited her mother in to take the ritual bathing photos. In one she strikes a pose in imitation of the photo show, in another she holds the showerhead before her vagina. They both laughed, had dinner, and took the rolls of film to the local drug store for developing.

The roll came back without the two images. Soon after, two policemen arrested Cynthia, handcuffed her, and took her “downtown,” where she was questioned and held till David could raise the $10,000 bail, the bare beginnings of the small fortune that would be put into her defense. The financial cost proved small compared to the enormous psychological and emotional burden that would follow.

Author Lynn Powell—who had been an acquaintance of Cynthia’s (their children classmates on the same soccer team)—soon becomes a friend and ally to the accused mother, as did at least half the town, and not just liberal college people, but locals: Republican and Democrat, religious fundamentalists, and active feminists.

The prosecutor and his assistant would not back down and were unfortunately aided by the incompetence of the Children’s Services Department which was pursuing custody of the child. As we come to know intimately Cynthia, David, and Nora along with lawyers and friends, we also become aware of the larger relevance of this story. It is not an isolated case nor are its implications.

Powell tells the story clearly, carefully documenting facts and legal issues as well as conveying vivid personal scenes between the key figures. It is an unsettling story bound to grip readers with its own quest for justice, understanding, and truth. Framing Innocence opens doors rather than closing them.