The Fragile Earth: Writings from The New Yorker on Climate Change 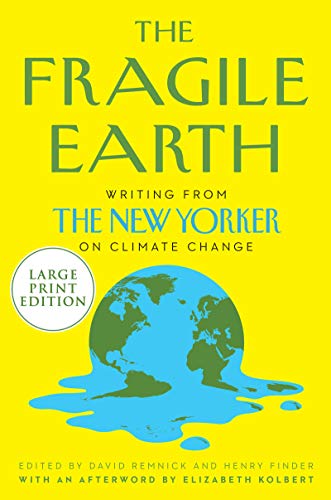 Nearly two dozen outstanding articles on climate change, just in time for the U.S. return to the Paris accords. Now, what?

Without doubt, the pieces here by Bill McKibben, Elizabeth Kolbert, and other leading writers contain solutions to the “rising seas, fiercer droughts, longer wildfire seasons, more devastating storms,” and so on, that are now daily news, as Kolbert reminds us.

The best (and most repeated) solution: “Stop burning fossil fuels.” Also helpful: “Not having children.”

“’Climate change,’ like ‘urban sprawl’ or ‘gun violence’ has become such a familiar term that we tend to read past it,” writes McKibben, who should know. His classic “Reflections: The End of Nature,” which opens this collection, was first published more than three decades ago. He has since co-founded the climate activist group 350.org, one of many trying to convince nations to find the political will to act.

And here we are, left to read these horrifying pieces, while glaciers melt, plains burn, and climate denialism runs rampant.

If nothing more, this book may help raise awareness of climate issues for those willing to consider them. The New Yorker has certainly made it it’s business to excel in this kind of reporting.

Few aspects of the climate crisis are overlooked. The book takes us from the shrinking glaciers of the Himalayas (there are 198,000 such ice blocks remaining in the world), to the wildfires of Australia, to efforts to bring solar power to Africa. We learn how geoengineering can deliberate (and beneficially) alter climate, and of efforts to encourage consumption of plant-based meats.

“There are undoubtedly myriad intellectual, psychological, and political sources for our inaction,” writes McKibben, “but I cannot help thinking that the influence of Ayn Rand, the Russian émigré novelist, may have played a role. Rand’s disquisitions on the “virtue of selfishness” and unbridled capitalism are admired by many American politicians and economists.”

“We are going to have to rethink the way we live and work,” says the chief executive of Tesco, Britain’s largest retailer, whose firm has had a remarkably hard time helping consumers lighten their carbon footprint.

Sociologist Eric Klinenberg notes that “As long as the threat from global warming seemed remote and abstract, it was easier to ignore.” Now, he says, on a hopeful note, “climate change is coming to mean something specific, and scary.” This will prompt some readers to think, not scary enough!

After all, as one writer observes, “few countries have demonstrated the political will required to act—perhaps least of all the United States, which consumes more energy than any nation other than China.”

Kolbert, The New Yorker’s climate writing guru, offers a dire forecast: “There’s simply no possible future that averts dislocation. Billions of people will have to dramatically change the way they live or the world will change dramatically, or we will see some combination of the two. My experience reporting on climate change, which now spans almost twenty years, has convinced me that the most extreme outcomes are, unfortunately, among the most likely.”

Several years ago, Kolbert interviewed James Hansen, the scientist noted for his research on human-made climate change, and asked him if he had a message for young people. Hansen said, “The simple thing is, I’m sorry we’re leaving such a fucking mess.”

A valuable book, with some fine climate writing, and—even at this late hour—an urgent call to action.