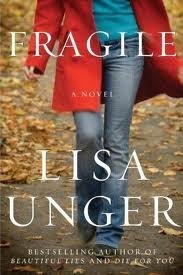 “The sins of a family always fall on the daughter.”
—P. F. Sloan

“She already knew the hard edges of the world, knew that life
disappointed and that most people’s dreams never did come true.”
—Lisa Unger

This one is a stunner. In Fragile, author Lisa Unger tells the story of four fragile lives that are joined together by events separated by twenty years. Unger’s genius is in plotting the story so that the reader never knows what’s coming next.

The story starts with a look at what appears to be a crime being committed, although the facts are not clear. What is clear is that a young woman, Charlene, has gone missing. She intended to run away from her sleepy community, The Hollows, in New York State, in order to make music in Manhattan. But she’s suddenly fallen off the face of the earth.

The residents of The Hollows, including the young woman’s mother and her boyfriend Ricky’s parents, are forced to revisit their memories of a high-school girl named Sarah who disappeared two decades earlier. She was found dead and mutilated; it was a crime to which a male classmate confessed. But the young man who said he killed her was troubled and perhaps mentally unstable. He goes on to spend years in state prison before he dies by his own hand.

With this background, we fear that Charlene has been abducted or murdered by the evil force or forces that killed Sarah. Charlene’s mother was a classmate of Sarah’s, as was Ricky’s mother, Maggie, and his police detective father, Jones. These adults are all keeping secrets about their lives both now and at the time that Sarah was killed.

Others in the community also know things about the events surrounding the past crime, but they’re not talking. The residents of The Hollows become frozen with the fear that they are reliving a nightmare, and decide to hide rather than talk. With little information to go on, the local police force begins to suspect Ricky’s involvement in Charlene’s disappearance. Charlene did, after all, stand him up on the night she left home and had informed her friends about a second boyfriend in New York City.

As the tale proceeds we see that there are no perfect families in The Hollows. The parents criticize their children for doing the very things they did when they were young, and this simply harvests the desire of the young to escape as soon as they can. The current mystery, the apparent crime that surrounds the disappearance of Charlene, will only be solved by confessions. Because there may very well be links between what may have happened to Charlene and what happened 20 years before to Sarah.

“As she told them all about her buried memory, she felt an awe at how all their separate lives were twisted and tangled, growing over and around one another. . . . And how the connections between them were as terribly fragile as they were indelible.”

There will be no hints here—no spoiler alerts needed—as to the fates of Charlene and Ricky, except to note that Unger convinces us that everything in life is so well connected (if hardly explainable). The past is, indeed, prelude. This is a read that will stay with you.