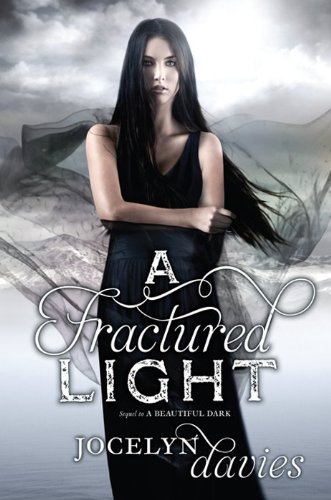 A Fractured Light is the second book in A Beautiful Dark trilogy. Sky, age seventeen, learns she is the product of angelic forces: The Order (the light) and The Rebellion (the dark). Both sides know she wields great power—power that she is barely beginning to grasp, understand, and control.

The story picks up directly where its prequel left off. Sky wakes up to find herself in an unknown place after being the victim of an attempted murder by someone she loves and deeply trusts.

As she heals and struggles to make sense of all that happened and what she means to the two orders fighting over her as well as the world at large, Skye makes the choice to pursue her relationship with Asher, one of the dark angels who hopes she’ll commit to The Rebellion’s cause.

The cover of A Fractured Light truly captures the dark, stormy atmosphere of this book. The author sets the story in the realm of the snowy mountains of Colorado. Ms. Davies utilizes that backdrop to good advantage. This is not a warm fuzzy story. The setting, serving, almost as a character itself, evokes a sparse, cold, and dangerous world.

Sky has several love interests to choose from, and the reader may not agree with her choices, but the author makes the connections between the parties intricate enough so that it’s not easy to brush off any of her options without reading further to ensure your decision is the correct one.

Surprising discoveries are made in this sequel. If you’ve gotten this far in the series, there’s no way you’ll be able to pass up the last installment coming soon.