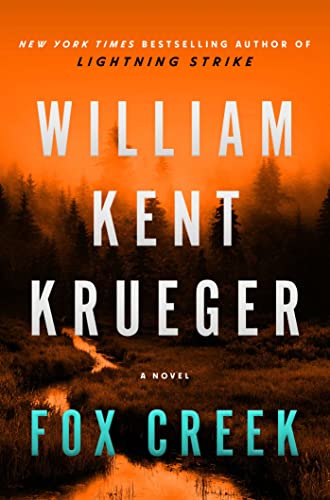 Cork O’Connor is back in his 19th mystery, set at the edge of the Boundary Waters wilderness in Minnesota: “a million acres of trees and lakes and rivers and no people.”

Well, there are some people . . . in settlements around the fringes. This area of mixed white and indigenous cultures has always conflicted Cork while integrating him, too. His own heritage of part Irish and part Ojibwe lets him interact with both worlds. Initially as a sheriff and then a private investigator, he’s spent book after book protecting both of his peoples.

Nowadays he’s investigating part-time, more interested in running Sam’s Place, a simple eatery, than being a lawman. Happily remarried and a grandfather, he’s as retired as he can be from the shadows and violence of his career.

But he can’t help being an ogichidaa—a warrior—who “seems to attract danger like some people draw mosquitoes, as if danger comes to feed on him.” With that inborn quality there will always be stories to write about him.

In this one, he has to stop flipping burgers and race off to rescue his Ojibwe mentor, Henry Meloux, an ancient healer; his niece, Rainy, who not only is a healer herself but also Cork’s new wife; and Dolores, a desperate mixed-blood woman seeking Henry’s help in dealing with her estranged husband’s disappearance. All are being pursued by a team of mercenaries for no reason Cork can discover.

But he must track them into the Boundary Waters, where Henry has escaped with the women mere hours ahead of the human predators pursuing them. Henry, more than a century old, has lived in the region his entire life and knows the terrain better than anyone still breathing, as well as how to move through it silently and invisibly. His wisdom and his attunement to the environment and its spirits, plus a creative bag of tricks and traps, keep the trio alive long enough for Cork to catch up to them.

The narrative cycles between four viewpoints: Cork, Rainy, Stephen (Cork’s son, another healer in training), and LeLoup, “The Wolf.” LeLoup is a tracker as good as Henry is and decades younger. He ended up with the mercenaries only for lack of a better option.

A Native alienated from his own people since birth, raised in cities by his mother until she died young, he was placed into the horrific residential school system for Native children until he ran away to the Northwest Territories. There he learned the ways of the woods and something of the old ways of his people until his mentor died. After that he enlisted in the military and learned how to track and fight the modern way.

This backstory makes him the most dangerous adversary Cork and Henry have ever faced. But then LeLoup becomes fascinated by Henry. Just from tracking him, LeLoup comes to understand and respect the old medicine man, which turns him into a wildcard during the hunt. No one can be certain what The Wolf is going to do, and where his alliance will fall.

The viewpoint sections convey the story in a looping fashion, each moving forward to escalating cliffhanger moments, then the next section backs up a few steps to take a different group to the same place before advancing again. When eventually everyone converges, the buildup of menace erupts into violence.

The author adds immediacy to the drama by writing in present tense. This is a change from previous volumes, and may knock some fans off stride. The third-person, present-tense style of narrative isn’t universally favored, and in this case it portrays familiar characters in an unfamiliar light. The technique may be refreshing to some while disconcerting to others.

The one element unchanged is the how the environment is presented. The series’ characters live intimately with the land and are indelibly imprinted by it, whether born in the region or having migrated in. It is a big player in every volume—this book especially, where so many characters have to survive in the wilderness with death on their heels, complicated by a spring snowstorm.

If the author’s and characters’ passion for their world isn’t clear enough from the stories, then a look at all 19 covers will underscore the point. Each cover expresses the power and beauty of the environment that spawned Cork O’Connor and company, along with the overarching series theme. It is implied or intuited in most of the books, but in this one it is articulated: “The arc of the moral universe is long, but it bends toward justice.”

This concept captures the surface plots and emotional depths of the series, raised to high relief in Fox Creek.