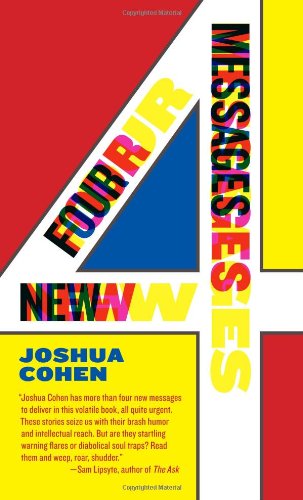 “The writing is all too coy, too precious, too studied . . . Still, there is talent here, undeniable talent . . .”

The theme? Online-edness. And the cult of narcissism it has created as we endlessly stare at ourselves in the electronic mirror.

Sadly, the four explorations come fully encoded in the linguistic shorthand common to the Internet experience (emoticons, elisions, and the like) until, like an unemployed cater-waiter spending the day at Starbucks gawking at Gawker, the reader is left confused and bleary over prose that has been microwaved into something else again.

Like this from the first story, “Emissions,” in which a character named Methyl visits someone called Mono:

“Under the cashmere overcoat Methyl wore only a wife-beater, the chest hair coming in spirals like @ signs. Below were baggy jeans and between the jeans and beater was a full foot of red boxers exposed.

“He came swaggering into the apartment, sat on the bed—there was nowhere to sit but alongside Mono, Methyl waiting as the TV was repositioned, returned to the floor.

“Mono asked, That mean you’re giving me a raise?

“Methyl had in his hands a gaming console as gray as a desiccated brain strangulated in black cords attached to two controllers.

“’It’s a new game, he said, still in development. I gave these city guys some tips on how to make it rawer, they gave me a copy of the beta.’

“He bent to fit plugs into sockets.

“Balancing the console on top of the screen.

“The TV showed a brick wall.”

So, for all intents and purposes, does the printed page.

What was that about that desiccated brain again? And who’s in development, Methyl or the game?

The second story, “MacDonald’s,” introduces what will become the author’s central theme: writing about writers writing.

It begins in “conversation:”

“I’d been writing a story, yet another shitblast of the hundreds I’ve begun only to crumble for ply (I’d never been blocked before, some blockage should’ve been good for me but), came to that part in the story and just—I just had to stop, it was ridiculous.

“I came to the point I knew would come, the point that kept coming, the point where I’d have to say what I didn’t want to say, to say what I couldn’t—what had no place in, forget my story, I told my father, What I’m talking about has not place in my life!

“What are you talking about? Dad asked and smiled retirement’s bridgework at being confronted by something as stunningly tedious as himself, probably—but himself fictionalized, as a fictional character—because I’m broke and so was wearing his clothing, also I have the beard he has because we both have weak chins. I’d come back to Jersey for the weekend to sleep without siren in my old ugly unrecognizable bedroom and fill up on homecooking.”

Again, even with so very tedious a theme (Why is it that teachers don’t teach about teaching or plumbers plumb about plumbing since writers these days only seem to write about writing?), there are moments of bliss like the reference to the weak chins. Even the overwritten “bridgework” is welcome. But they are like occasional flecks of gold in a vast vein of pyrite.

The writing is all too coy, too precious, too studied, like a middle-aged man saying, instead of “details” “deets” as if forming the full word is just too trying, too staid.

And again after the moments of bliss, there are long stretches of nu-speak, or, more specifically, nu-lit. In which this, thrown at us later in the same story, passes for nu-wit:

It is all so very McWearying.

McDull, once you realize that, as Marshall McLuhan suspected, for Joshua Cohen, the medium is indeed seems to be the only message, and beneath the labyrinthian structure of these things, the stories themselves are so slight, so simple as to make Four New Messages add up to nothing more than a picture book, albeit one with very blurry word pictures.

The obsession with writing about writers writing hits a fever pitch in the third story in the collection, “The College Borough.” Here the concept globs together with its subset—teachers who teach writers about writing—and we are given a story set in a “square state,” wherein a published writer comes to town to teach student writers how to write, but instead has them build a replica of New York’s Flatiron Building.

Here what might have been an absurdist fantasy instead becomes a nest of variants, as the imagery, characterization, narration, and “wry” subtext of the other tales is merely given a slight stir. Thus we are given a character, Grazinski, “whose avant lacked only a garde,” which leads the reader to suspect that Mr. Cohen has, at this point, switched from fiction of autobiography.

When words becomes a noodles—something we have to cook and then throw against the wall of our brains in order to find out if they have been cooked—then they cease, for all intents and purposes, to be words. They are, instead, a collection of letters that may or may not communicate.

The lines, squiggles, and other bits and bobs that comprise our diacritical and grammatical swat teams exist because communication, especially written communication (in which we cannot see the squiggles etched on the human face that these bits have been created to replicate).

And so, when, in the name of what?—art?—we are left bereft, without benefit of our linguistic support staff, and the gap between the mind of the writer and the mind of the reader becomes longer, deeper and wider, all at once.

And the flow of ideas from sender to receiver, from maker to consumer, stands still, slumps, impeded in the stranglehold of the oblique.

“The white box whirred as he began to waste—life the same as battery life, he couldn’t be bothered to plug anything in, he was tired but wouldn’t yet crash.”

In a single sentence, it shifts from insightful (indeed, “life the same as battery life” is pretty damned swell) to merely irritating. All for the sake of a little lost grammar and perhaps a missing word or two.

Still, there is talent here, undeniable talent, as here, from the final story, “Sent,” which, with descriptions like this, almost a story makes:

“She was herself like wood this daughter but like deadwood because she’d been chopped from the roots of her life and left unwatered to wither and die. She was hardened like bark (those were the stockings she stole from a friend), but absent mostly as if without sensation, which is to say that to men she was attractive because inaccessible in her emotions, her life passed her by like the jungle scenery in the background of Tokyo cartoons, her yes glozing into knots and her mouth into a knot and her clear skin was in the mornings brittle but furrowed and rough in a wild way as if she’d been lasciviously dreaming and once a man . . .”

There but for a few commas, a few bits and bobs of grammar, a couple clear indicators of meaning, goes a hell of a great paragraph.