Foundryside: A Novel (The Founders Trilogy) 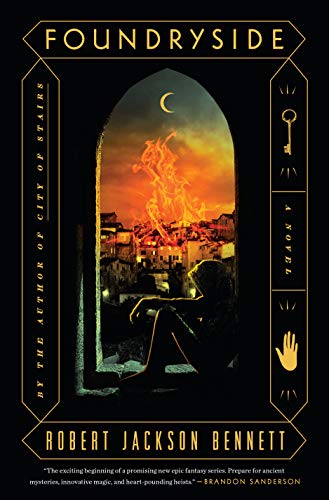 Sancia Grado starts this book facedown in the mud, and things don’t get much better for her from there. Sancia has had a rough life: Some of her earliest memories involve plantation slavery and Nazi-doctor-style experimentation with her as the subject. She lives in poverty, stealing what she needs to survive, trusting no one. She has only one advantage, if you can call it that: the docs left a metal plate inside her head that allows her to sense everything that’s connected to whatever she touches.

The plate is one example of the magic that infuses the world of Foundryside. For those who know how, objects can be scribed—inscribed with magical symbols that convince the objects that reality works differently for them. Carriage wheels can be convinced to roll downhill when there is no hill. Crossbow bolts can be convinced they have been falling from a height and thus are traveling at a high rate of speed. Doors can be convinced they are inseparably fused to the wall except in the presence of a key.

A magical talent with a downside is a common fantasy formula, but Bennett takes it to a new level: Sancia’s ability certainly comes in handy for thieving, but otherwise it’s a curse. She can’t turn it off, and it’s physically painful to use. She can’t touch another person without pain. Even changing her clothes is uncomfortable. True, she has an ability that others don’t, but the downside is so severe and the memory of the trauma so affecting that she’s more like a Holocaust survivor than a superhero.

Until she meets Clef. It’s hard to talk about Clef without spoilers, but their partnership is one of the highlights of the book. Clef, too, has a special talent and a damaged past. Their personal journeys intertwine as each learns to come to terms with the past, to care for other people, to believe in the possibility of justice and goodness, and to be willing to sacrifice what they love to achieve it. Other characters enliven the book’s pages as well, each with a unique backstory that convincingly drives their choices, each with internal baggage and motivations that are sometimes self-serving, sometimes heroic.

The story evolves through a series of ever grander capers, starting with a safe-cracking heist Sancia engages in simply for the money. As her circle of friends grows, however, so does her awareness of the machinations among the city’s powerful, and she turns her talents toward stopping their secret, evil plans. The caper plot makes for a satisfying Oceans 11 style tale, full of hidden plots, constant danger, and creative devices for robbing unbreakable strongholds.

Foundryside reaches beyond the simple adventure of a caper, however. Its flawed and complicated characters inspire thoughtful consideration of how power inequality in society works, how difficult it can be to look beyond the experiences of one’s birth and upbringing, and how the pursuit of justice sometimes asks more of the oppressed than it does of the powerful. It will be particularly interesting to see where Bennett takes the story in book two, now that the balance of power in the city has shifted.

The only part of this delightful novel that felt thinly drawn was the political system. The city of Tevanne is composed of campos, which are part corporation and part independently-governed walled enclave. There is no other government anywhere; the campos seem to control all the surrounding countryside and even other conquered countries, implying that everyone outside the city is either a slave or an employee.

It was never clear how the campos effectively project their power, why they are all located in the same city, or where the customer base is for the goods they are competing to create and sell. One character speaks of creating a new campo by filling out paperwork, but without any central government, it’s not clear who is maintaining the system or collecting the paperwork.

This is a minor complaint, however, and one which may be put to rest in future novels as the larger world is fleshed out and explained. Foundryside stands as one of the best fantasy novels of the year, and sets the stage nicely for the sequel, even as it satisfyingly resolves the major conflicts of the plot. It’s a quick read, hard to put down, but still leaves the reader with thoughtful insights and a connection to realistic and empathetic characters. Bennett’s previous Divine Cities series was original and thought-provoking; this trilogy promises to be even better.