The Founder's Dilemmas: Anticipating and Avoiding the Pitfalls That Can Sink a Startup (The Kauffman Foundation Series on Innovation and Entrepreneurship) 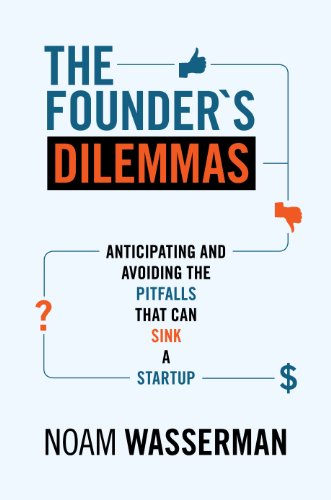 “Do not start a startup without this book.”

The Founder’s Dilemmas is something rare: a groundbreaking work that succeeds as both an academic text and one that will hold both the aspiring and experienced entrepreneur in its real-world thrall.

This book, upon release, becomes the single-most indispensible guide for founders of startups. Comingling research, straight talk, and a human voice—so often lacking in books with an academic bent—Dilemmas totally rocks as a business school required read and a founder’s gripping, absolute must-read. Turning the last page, anyone with an entrepreneurial femur in their body will be fully armed with a battery of knowledge that can make or break a passionate first or even fifteenth venture. Do not start a startup without this book.

Author and Harvard Business School professor Noam Wasserman, in this deft project, grounds his pages in a decade of voluminous research and numerous real-world examples that shed light on the morass of factors—many of which might not even be considered by a budding entrepreneur—that can be the lynchpins determining in unforeseen ways a startup’s destiny.

The book’s eleven chapters are structured to be read from cover to cover or in sections according to personal relevancy. And yet Mr. Wasserman begins with and devotes many pages to myriad ways in which early decisions may have a lasting impact on the founder’s baby.

For example, one might decide to found an online book review and consider it merely polite to furnish publishers and authors with copies of book reviews before release, not realizing that the mass of links these parties create to the online review, once live, will, in search engines, register as an endorsement of the site’s value—accordingly increasing its traffic. Of course there are other sorts of early decisions that may result in less fortunate outcomes. Knowledge of how these various choices may impact the reader’s enterprise is a core element of Mr. Wasserman’s work.

A recurring theme throughout the book is the almost relentless tension between structuring and managing one’s start-up to retain full control (and all that this preserves) and configuring and allowing for an evolution that will generate maximum wealth. Are these entirely mutually exclusive? Often enough, but not always.

Mr. Wasserman points out, for instance, that intrinsic to Bill Gates’ mystique is the very fact that he is an outlier, having founded and maintained firm control. At the same time, one need look no further than Apple to see the legendary and oft-celebrated founder Steve Jobs remaining a visionary and Apple’s quarterback for most of his adult life, but also engendering discord, causing a rift between him and cofounder Steve Wozniak, resulting in Wozniak's exit. Of course few companies survive such a split—much less prosper as has Apple.

More frequently, founders amass less wealth if they remain CEOs than if they relinquish the role at the right juncture. Many are well equipped to execute on the early pages of a startup's business plan, but far less capable at running an enterprise as it evolves and grows.

But most start-ups are not wild successes, even if they survive, often with last ditch life support. Mr. Wasserman’s research indicates that “[o]n average entrepreneurs earn no more by funding startups than they would have earned by investing in public equity . . .”

Why then do so many serious business people bother with the startup high wire escapade? Mr. Wasserman quotes one founder: “I had to get off the heroin drip of a salary.” Many sympathize with this comment while clinging to the safety of a sure paycheck.

Those sufficiently inspired to cast off the shackles of job dependency and leap into unknown capitalist territory, invariably underestimate cost, timing for reaching key business plan milestones, as well as the extent to which this enterprise will become a no-holds barred obsession.

All of these factors may turn one’s personal life inside-out. Indeed, Mr. Wasserman points out “that the most insurmountable obstacles to founding may be unfavorable personal circumstances. . . . The challenges of balancing startup demands and family demands may be particularly acute.”

The trove of informative research delivered through the author’s keen lens is beyond the scope of this review. Topics covered include the pros and cons of the varied scope of founders’ choices such as:

• whether to go solo as founder or recruit a founding team,

• the implications of preexisting relationships among cofounders,

• the assignment of roles among the startup team and their decision-making process,

• the basis for assigning titles—a visceral issue for many new to the startup game,

• the allotment of equity,

• and ultimately, CEO succession—a change as indicated earlier is at some point nearly as certain as taxes.

Mr. Wasserman does not pretend to have every answer. His general conclusions are the product of his research, with a sharp nod to the outlier and to the uniqueness of each founder’s dilemmas. Still he provides those brave or foolish enough to toss their day job in the trash bin with a solid, albeit admittedly and by definition, imperfect rudder.

Any founder contemplating a launch and turning the last page of this book will be left with sober and extensive knowledge, the makings of a blueprint, and perhaps the inclination to reign in boundless, naïve optimism.

The good news is that all of this newfound knowledge will be make lead founders to make better choices.

Those who still have the stomach to proceed will consider their finances and cross the Rubicon better primed.

Other potential founders will arise the next morning craving a bracing, icy shower to prepare for the day job, stuffing the notepad scrawled with startup plans into an obscure home office folder.