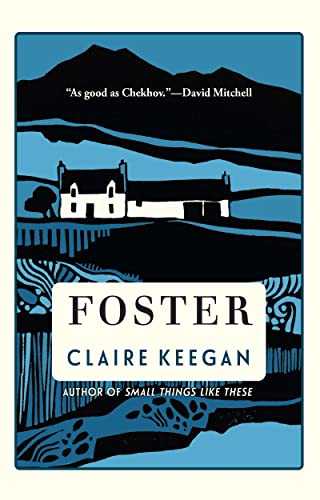 Set in rural Ireland, Foster by Claire Keegan relates the story of a young girl who is taken in or fostered by her aunt and uncle for a summer. Foster was previously published in an abridged form in The New Yorker in 2010. Like Vermeer’s luminous miniature painting “Girl with a Pearl Earring,” the novella Foster depicts both the exterior and interior; it is an exquisite piece of perfection. Through her poetic, yet precise prose, gorgeous details, and astute observations, Keegan creates a moving and stunning work.

Narrated by an unnamed girl who is young and light enough to sit on her uncle’s lap and be carried, Foster tells, entirely from the child’s perspective, her experience with her aunt and uncle, the Kinsellas, after being dropped off by her father. Although the time period and the girl’s age and name are never specified, the narrative captures the setting of rural Wexford, the mood, and the characters, all through the girl’s point of view.

The girl begins her story: “Early on a Sunday, after first Mass in Clonegal, my father, instead of taking me home, drives deep into Wexford towards the coast where my mother’s people came from.” The narrator is then deposited at the Kinsellas, strangers to her, not knowing if and when her father will return to retrieve her.

After being dropped off and forgetting to pack her clothes, the girl wonders, “Why did he leave without so much as a good-bye, without ever mentioning that he would come back for me?” Unlike her own father and pregnant mother, who are poor and have more children than they can tend to, the Kinsellas dote on and care for her with warmth and attention. They bathe her, buy her clothing, feed her well, teach her to read, talk with and spend time with her.

However, this seemingly loving, well-run Kinsella home harbors a secret. The girl observes her aunt getting upset after Kinsella says to her, “You know what I’m talking about, Edna,” and she notes their over-protectiveness, but cannot put all the pieces together to unravel their story. Although her aunt tells her, “There are no secrets in this house,” because “‘Where there’s a secret’ she says, ‘there’s shame—and shame is something we can do without,’” there are secrets. The girl’s unanalyzed observations provide hints to form a tension-filled mystery at the heart of the narrative until the matter is disclosed by a gossipy neighbor.

There is not an egregious word, sentence, or snippet of dialogue in Foster. The prose is lyrical, yet concise and pitch perfect. While the narrator is young and naïve, the narrative is intentionally constructed so that everything that is filtered through her perspective is central to the story. The girl observes differences in the landscapes, homes, and mannerisms of her own family to those of the Kinsellas. Without judging, just describing, the girl notices the well-maintained farm at the Kinsellas, that her aunt and uncle share a bed, and that her uncle holds her hand, subtly implying that things are different in her own home. The girl’s attachment to her foster family develops and tension mounts until the devastating and magnificent ending.

Like Claire Keegan’s previous novella Small Things Like These, which was aptly described as a “jewel,” Foster, too, is a rare, beautiful, multi-faceted, shimmering, gem of a work—a gift.