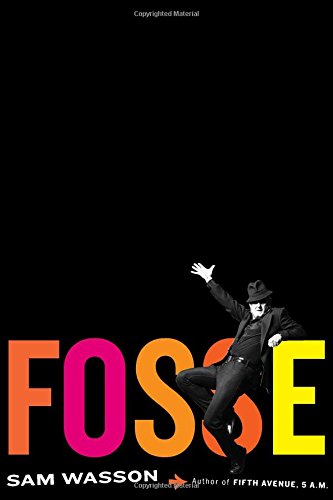 Buried deep in the back of the book in the Acknowledgements section Fosse author Sam Wasson writes something pretty terrific:

“Every biographer is Dr. Frankenstein and research is the lightning bolt.”

Thus it may be said that the biographer’s passion involves reanimation of the dead. And more, this revivification is powered by the memories of those who knew the subject first hand for better or worse.

In the case of Fosse, the Frankenstein monster gets up off the table to dance, in that the subject of the biography is Bob Fosse, the American dancer who became a choreographer and then a stage director and then a film director, and then a film editor, and then an author of works for stage and screen. Along the way, Fosse was ever the innovator, ever the button-pusher who often worked by way of inducing havoc, ever the visionary who showed his dancers a new way of moving and his audiences a new way of seeing.

“The single greatest pleasure of writing this book was harvesting that lightning person to person, from Fosse’s dancer, friends, family, lovers, collaborators, and enemies. I interviewed over three hundred.”

It’s that turn of phrase, “harvesting the lightning” that slays and illustrates so beautifully the thing separating this biography from that great big pile of others surrounding it—it is just so wonderfully well written.

In addition, there is the aforementioned research. In this the author is scrupulous. The work is impeccable. Six hundred pages of insight and information and not an edit to be found. Six hundred pages that, in telling the life of Fosse, seem hardly enough.

And oh, it is amazingly well written.

Like this bit. This moment in which the author has to tackle that which no one would want to tackle and explains in words what Bob Fosse did with movement. And more, just how those characteristics represented both homage and pastiche, a fluid representation of all that vaudeville had offered once before:

“One can discern his taste for showbiz symbolism and convention in the burlesque vamp, Astaire-tilted hat, and outstretched Al Jolson arms. Face-open palms, inherited from the minstrelsy tradition Fosse had seen passed through vaudeville, hang coolly on his wrists and even flicker for a moment—razzle dazzle. Tiny pantomimes seem closer to clowning than to choreography; single joints hiccup; appendages engage, then drop. There’s also an element of acting, as if he and [fellow dancer Carol] Haney aren’t merely dancing but dancing about something. They have wants. He grins; she’s desperate, crawling after him. This is not [Agnes] de Mille-fluid, nor [Jerome] Robbins-robust; it’s not American ballet and not American colloquial. It’s Fosse.”

Starting with the “Steam Heat” dance in Pajama Game, through the ironic anthem “The Secretary is Not a Toy” in How to Succeed in Business Without Really Trying, to the shows Pippin and Chicago and Dancin’ and Sweet Charity and the films Cabaret and All That Jazz, that short declarative sentence “It’s Fosse,” came to identify all that was sharpest, smartest and most cynical in the American musical theater.

And more, Fosse himself (certainly after he laid his life bare onscreen in All That Jazz) became, if not a standard-issue celebrity, then something of an American cultural icon in the 1970s and ’80s, an era in which he charged the New York stage and reinvented the musical and then literally changed the pace of American film with his innovations in camera staging and editing.

Previously the author of Fifth Avenue, 5 A.M.: Audrey Hepburn, Breakfast at Tiffany’s, and the Dawn of the Modern Woman, in which he staked his claim as a commentator on American Popular Culture, Sam Wasson could not have chosen a better subject for his follow-up. Fosse—with his hat tipped to the side and a cigarette hanging perfectly from his lower lip—was, after all, someone who, like Hepburn with that long, long cigarette holder, came to exemplify a moment in American entertainment, if not cultural, history.

If nothing else, Fosse’s long-time addictions to tobacco, drugs and heterosexual sex allow Wasson to get to state to following:

“Sex was a medium for Fosse. It was as much a physical act as it was an opportunity to learn about and merge with his female collaborators, a way of giving to them so they could give back more and better—that is, if they didn’t break under the pressure or retreat in anger. As a means of communication, sex was an exclamation point, far better than the periods of regular life. Sex improved on respect and trust—for the dancers and for him. Sex brought him closer to the epicenter of talent, as if by dipping a hand to the geyser, he could steal back a drop for himself. And all his effort brought him applause too. Fit, built, and endlessly attentive to detail, Fosse was a terrific lover, some said the best they ever had, and in bed, he worked as hard as he did in Variety Arts, giving to get. In bed he owned the spotlight, Fred Astaire performing for an audience of one (or sometimes two) night after happy night—and they really were happy—laughing, sweating, talking together. Sex as better than being up late and trying to drink the amphetamines to sleep on his own, without anyone there to hold back his dread.”

Fosse begins with a simple question; one asked by Bob Fosse himself:

Mr. Wasson then answers the question with the title of each chapter, with the numbers descending, from “Sixty Years” on down, with the last chapter entitled “One Hour and Fifty-Three Minutes.” And after 586 pages of the Mad Mouse that was Fosse’s life, the triumphs, the bombs, the loves, the friendships (the all-too-brief section on “Dancing for Writers” is among the best biographical anecdotes ever gathered), the collaborators and the collaborations, as well as Fosse’s own rather bizarre notions of loyalty, love and artistic success, this last chapter still somehow stands head and shoulders above all that has come before.

In it, Sam Wasson somehow manages not to walk his reader through Fosse’s final moments, but, instead, to bring his reader into those moments, to walk with Fosse and his (sort of ex-)wife, best friend, chief collaborator and muse, Gwen Verdon, as they begin to walk together a path that only she will complete. As perhaps Fosse’s own spirit might have, the reader feels the sensation that he is floating above the body as the light fades from Fosse’s eyes.

It is, quite simply, breathtaking work. A suitable finale to one of the best biographies in recent years. Sam Wasson in the pages of Fosse has indeed managed to harvest the lightning and has used it to bring both light and heat.

Fosse is a substantial, entertaining, and illuminating work, one that leaves its reader wondering, as Fosse’s own audiences used to do, what Mr. Wasson could possibly do next in order to top this.