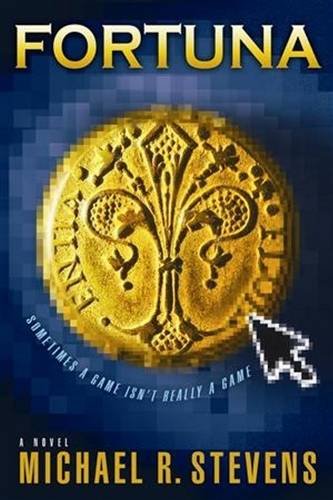 Jason weighed the situation for a moment, and then decided to risk jumping out of character. “Pisa isn’t in the game,” he typed. Very quickly, the voice responded. “This isn’t a game.”

Fortuna is a rollicking, riveting ride from first-time author-musician-technology expert Michael Stevens. This is the story of Jason Lind, a computer science major at Stanford. Jason is brilliant but bored—and then he discovers the web-based game of Fortuna. As in Second Life, Fortuna offers the chance for Jason to re-create himself. The digital version of Jason is a living, breathing, avatar in medieval Florence, Italy. However, playing the game has its costs financially, time-wise, and to Jason’s relationships. . . .

The game of Fortuna eventually so absorbs Jason that he faces losing his teaching assistant position at The Farm and quite possibly faces the prospect of dropping out of school. One aspect of Fortuna is gambling; real people gamble for riches and status for their digital persona as they begin to fail to distinguish between their real and digital lives. But when the gamble is lost, debts must be paid off in true American dollars. The penalty to fail to pay one’s debts is death.

Jason’s huge debts cause him to take a job at the high-tech Silicon Valley firm GPC, where his late father worked. Jason’s uncle heads the company that is rumored to have ties to organized crime. GPC provides some immediate funds and protection for Jason but he may not be safe anywhere.

Eventually, Jason must run for his life as he faces threats from both inside the game of Fortuna (“You are in danger.”), and in real life. Jason’s father—one Nicholas Fabonacci—gave 50 million dollars to Stanford before dying under mysterious and questionable circumstances. Was Fabonacci—whose name graces a newer building on the campus in Palo Alto—killed and, if so, will Jason share his fate?

Perhaps the best aspect of this computer technology-mystery-thriller is the fact that the reader will not anticipate the ending in advance. Fortuna is about a massive struggle between good and evil, Machiavellian in nature. Which one wins in the end? You will have to read the 290 pages of Fortuna to find out the answer.

This one is highly recommended. Fortuna is a game worth playing—but don’t bet The Farm on it—and a unique tale that should be read. This reviewer looks forward to the next clever suspense thriller from Michael R. Stevens.