The Fortress at the End of Time 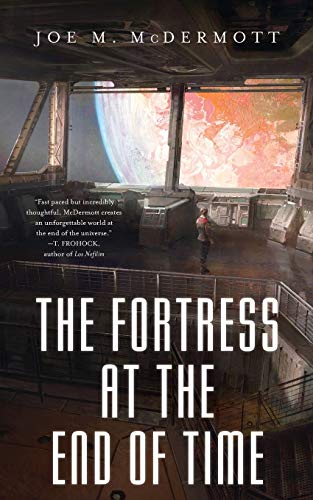 Joe M. McDermott's The Fortress at the End of Time is inventive, thought-provoking, insightful, ambitious, and tedious. Extremely well written, it is a novel for those who love to explore the ideas and ethics of space travel, and deep isolation, as apposed to those that love to explore.

At times brilliant, it can also get bogged down in its own intellectual exercises and will bore those looking for action oriented military scifi, while exciting those that are tired of the same old spaceships firing lasers and Space Marines hunting aliens.

Set in the far, far, far future, The Fortress at the End of Time is the story of Captain Ronaldo Aldo who has committed "an unforgivable crime." The novella is his confession to this crime, hinting at what he has done while also keeping the reader in constant suspense as to the exact nature of his offense. He is not necessarily a likable protagonist, as he freely admits, and at times it is hard to not want to see the confessor thrown out into the deep, dark space that he fights to keep at bay.

Moved across the galaxy by ansible, a technology that transmits all the information that makes a person who they are to a machine that can create an instant copy, the Renaldo Aldo that we learn about is a clone of the one left back on Earth. The redundancy of his name is an obvious allusion to the redundancy of his body. It is a highly inventive concept and the central conceit of the novella.

But even with the inventiveness of the tech and world building, the novella is not a fast read. It is a slow burn of a morality play where the confessor is at once the defendant and the prosecutor. His own guilt plays so heavy in the narrative that it is hard to see how anything beyond his death could be the resolution.

Yet even with the weight of the theme, the novella is compelling and has a climax (if a slow novella such as this can have a climax) that both satisfies the reader and leaves him/her in a state of questioning.