Fortress America: How We Embraced Fear and Abandoned Democracy 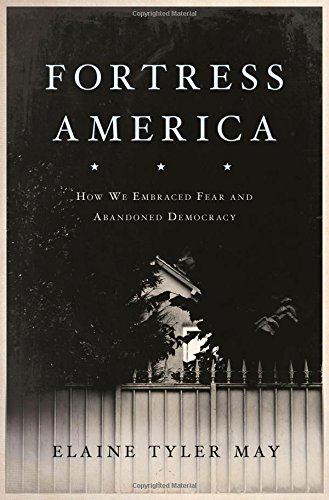 What are Americans afraid of? According to American historian Elaine Tyler May, fear is one of the prime markers of American society since the end of World War II, and, for the most part, Americans fear the wrong things. This fear imperils democracy and puts many Americans in danger.

In this brief and insightful piece of historical literature, Elaine May has recounted the history of the past 70 years from a very narrow and sharp perspective with important results. One can hear the echoing voice of President Franklin D. Roosevelt intoning “You have nothing to fear but fear itself.”

Although these words are familiar to anyone who has taken a basic American history class post-second grade, the warning, the lesson, and the meaning have been forgotten. The reasons for this, as well as the consequences, are spelled out with considerable power using examples that will be familiar to all.

May starts with the self-evident, noting that fear has taken all sorts of forms in the history of the United States. Americans have feared newcomers, outsiders, their slaves, the working class, various ideologies, and any number of religious groups. These have been dealt with through persecution, isolation, discrimination, and killing in a direct or indirect manner.

May believes that fear has been most widespread in the United States in the period following World War II. The Cold War with its fear of communism and communists, of the atomic bomb with its massive destructive capability, of crime and criminals, and of the unsettling of the social order all contributed to the wave of fear. Furthermore, the government and politicians have deliberately and consciously stoked the fears of Americans for a wide range of motives.

Fear of communism led to the growth of the national security state, and fear of communists produced a fear that communists were ubiquitous in American society. This in turn placed everyone and everything that was unfamiliar under suspicion. It began with the Truman loyalty tests and the anti-communist witch hunt in all walks of life. No one was above suspicion, thereby undermining the concept of community that is central to democracy.

May revisits all of these machinations of fear and then tracks them as they evolved in the second half of the 20th century. Fear of communists was transferred to fear of crime and to fear of African Americans, especially young males. Fear of crime and fear of African Americans led to a white suburban world, which morphed into the gated community and produced a form of self-incarceration.

These accumulating fears produced the politics of law and order, which in its more recent forms, led to a massive building of prisons. The prison population driven by mandatory sentencing created an extreme overrepresentation of incarcerated young African American males. This has resulted in a significant number of disfranchised citizens. It has also contributed to a boom in gun ownership with its many and varied consequences.

How all of this has impacted women in the society is another of the major themes developed with great skill and to great effect by May. Some of these social myths include such tropes as the weakness of women, the need for male protection of women, and the fear of rape and other violent crime.

Then in a devastating conclusion to her argument, May shows how all this fear grew despite the decline of crime, particularly violent crime, over the past 25 years or so; how there is always a new threat as the old ones decline; and how in fact the greatest threats stem from the closest and most familiar people in the social milieu of the average American. Victims of violence are more likely to have been attacked by family members than strangers on the street.

Some will quarrel with Elaine May’s arguments, statistics, and examples, and that is probably inevitable. Others may be put off by the unrelenting nature of May’s prose that seems akin to an Oliver Stone movie in its drum beat persistence. On the other hand, what is best about Fortress America is how it challenges assumptions with mundane examples that will be familiar to all and jarring to read.