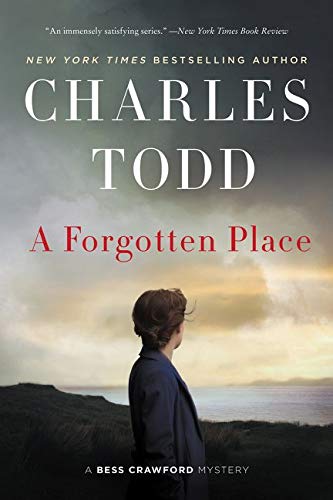 How marvelous to have Charles Todd set the tenth Bess Crawford mystery in Wales, the least written about part of the British Isles. And the long, slow movement into the story in A Forgotten Place evokes how loveliness can exist next to, even woven into, a deep darkness.

The skills of wartime nursing serve well for Bess Crawford, a “Sister” returning home from battlefield hospitals, in coping with the despair of British amputees at the end of the Great War, in 1914. (Remember that unlike the American term where "sister" would have implied being a nun, the British term "nursing sister" meant a graduate nurse). With a mix of gentle bullying learned from experience and from the Matrons who’ve led the nurses, Crawford nudges a Welsh office, Captain Williams, to resume leadership of his wounded men—even with his own condition of a missing leg and uncertain fitness for postwar work.

Yet despite Bess Crawford’s best efforts, one of the men is dead of suicide before leaving her care, and others appear ready to do the same. After all, what use is an armless or legless man in a coal mine? For in Wales at the time, that was almost the only way to make a living, dirty and dangerous as it was.

Bess works at letting go of a persistent sense of responsibility for the Welsh men. But when a note from Captain Williams informs her that another suicide’s taken place, with more sure to follow, Bess takes the man’s plea seriously: “I’m at my wits’ end, and I am writing to ask your help in bringing them to their senses. I have no right to ask this of you, but if someone doesn’t do something, we’ll all be gone by the spring.”

Todd is completely convincing in portraying Bess Crawford’s overwhelming sense that she must “fix” this, and at the same time showing the tenderness and loyalty that she gives so readily to people she cares about, even though they live far away and in circumstances she can’t fathom. And it’s perfectly logical then for Bess to take her own leave and quietly board a train for that desolate, forgotten place and the wounded warriors barely clinging to existence.

When Bess finally catches up with the captain, who has already moved away from the suicides that surrounded him, he’s in an isolated hamlet on the storm-swept coast, even bleaker than the usual Welsh settlement of the time. His first whisper to her is ominous: “You mustn’t stay here,” he said softly. “It isn’t safe.”

That turns out to be an understatement, as Bess finds herself trapped in the hamlet and cut off from all her support, with her family and Matron not knowing she’s in this place, and the threat of death aimed even at her, if she tries to escape. Why? Well, the hamlet has a secret—and because Bess is such a good investigator, she soon knows that secret. Nobody can afford to allow her to tell it.

Readers of this series will appreciate how Charles Todd (a mother-and-son writing team) draws out the impact of the Great War in this grim time that could have been a celebration of peace, but instead reveals the deep wounds of the survivors.

But there’s no need to have read the series before plunging into A Forgotten Place: Todd positions Bess Crawford’s persistence and daring adeptly, and no plot elements depend on the earlier books. There are a few unfortunate name errors in the text, but it’s easy to overlook them, in the double tide of the soldiers’ despair and Bess’s fierce commitment to bringing about as much healing and justice as is possible.

Deft plot twists and an atmospheric setting make this a must-read for anyone savoring the abundance of World War I and II crime novels being published. In addition, the Bess Crawford series is the perfect “other gender” balance to both Todd’s original Inspector Rutledge series and James R. Benn’s Billy Boyle investigations, and A Forgotten Place forms an intriguing parallel to the Shetland mysteries by Ann Cleeves. Well worth adding to the “to be read” stack.