The Forgotten Hours: A Novel 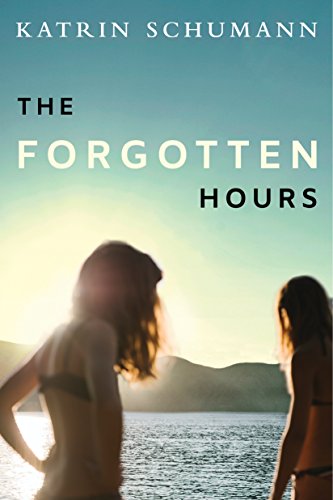 “Schumann has an eye for detail, an ear for the rhythmical sentence, and a voice that is clear and resonant.”

Katie Gregory’s life came apart at age 14 when her father, accused by her best friend of sexual assault, was sent to prison. Ten years on, Katie has regrouped and moved forward, still believing her father is innocent.

With a rewarding New York job, and new boyfriend, Zev, a promising artist, she feels she can finally lay to rest her demons from that summer at the family cottage on Eagle Lake.

But now her father is being released from prison and returning to radically altered circumstances. John’s wife, Charlie, has divorced him and sold the house, while Katie and her brother, David, are now adults living on their own. He plans to reside year round at the cottage.

Hounded by reporters Katie feels her life unraveling once more, especially after revisiting, through transcripts from the trial, the events of that fateful night at the lake. Her efforts to confirm her father’s innocence only lead to further uncertainty and distress.

Katrin Schumann tells a riveting story, keeping the reader engaged and ever on track through frequent shifts from past to present, as determined by Katie’s associative train of thought.

Along with the protagonist and her elusive father John, the main characters are believably fleshed out as they attempt to support or mislead Katie in her pursuit of the truth. Charlie, her mother, becomes almost an accomplice in her effort to dissuade her daughter from going down that road; David keeps in the background, mostly, but is a real enough presence; Jack, Katie’s adolescent “crush” who testified as a witness at the trial she was too young to attend seems to her now to be withholding critical information. And Lulu, whether innocent victim or beguiling temptress, is so complex she seems not to know herself even now as an adult.

As the novel progresses, Katie regresses—into the past in search of what she doesn’t know, and into herself as she prepares to face her father and the return of her demons.

The writing “unspools without a snag” to borrow a phrase from Katie’s description of the first half of her life. Schumann has an eye for detail, an ear for the rhythmical sentence, and a voice that is clear and resonant.

A single paragraph seen through a cab window brings London to life during Katie’s brief, but game-changing, visit to her ailing grandfather:

“Patterns everywhere you looked: in the multicolored bricks scalloped along the rooftops; in the fluted iron railings bordering front lawns; in the rows of trees, all pruned just so, leaves supple and ever rustling. There was far more sky visible than in New York, and when the sun came out, it was so vast and shocking that the streets glinted with surprise.”

Schumann often finds the metaphor that conveys more than visual agreement, exposing the unobvious as well—“the silent black muscle of the Thames” in fading light—Katie’s grandfather’s animated face “sagging at the edges like melting wax”—memories of her previous life “lived inside her, shadows of a bleached-out stain.”

There are, however, moments of over-writing, where the author strains, not to sound clever or funny, but writerly, as in “The sheets were saturated with the smell of what some chemist in a lab somewhere considered to be the essence of wildflowers.”

At times the novel seems almost to work against itself in piling on the detail. When Chekhov urged writers, above all, “to make the reader see,” he had in mind the evocative glimpse, like the glint of moonlight on a broken bottle that would trigger in the reader’s imagination a barren riverbank at night. Describing every detail can overwhelm readers, and wear them down.

“The sky seems to contract, sucking energy into itself, and then in an instant it is bloated, pressing down on them, and it lights up like the flash of a thousand bulbs, and there is the deafening sound of total silence as they are bathed in frozen light, and then the crack of thunder, a splitting open of the sky like a white wound.”

Clive James once remarked that bad writing is hard work. This is not to say that parts of The Forgotten Hours are badly written, only that they’re over-written by a writer whose talent for understatement carries her further.

She struggles at times, as writers do, with deciding when to let the reader do the heavy lifting and to be there only when needed, like a spotter.

At other times she crosses the almost imperceptible line between presenting a character’s thoughts and analyzing them.

Katie is, by nature, a reflective young woman whose life has already given her pause for thought. But she pauses too long sometimes, and thinks out thoughts that the reader has independently arrived at.

When, for example, she is finally ready to confront her father about the truth, and they turn to face each other, drinks in hand, we are told “that this was one of those before-and-after moments. Life was lurching forward in a direction she hadn’t anticipated. Her numbers were not adding up, and her trajectory was changing.” We kind of knew this from the prologue.

After reading section of the trial transcript for ourselves, its critical moments are summarized, in case we weren’t paying attention. When her father’s lawyer informs Katie that her friend, Lulu, claims to have been raped and has told the police, he realizes she hasn’t got it yet. His hands hover in midair as he emphasizes that the accused is her father. In case we didn’t understand what this means, we are told, “with those words, with that awkward gesture, Katie’s life changes irrevocably.”

She even analyzes her seven-year old self in those idyllic days when she picked blueberries with her father and glimpsed “her own singularity, her unbreachable otherness, for the very first time.”

So, when at one point she says she badly wants to escape her own mind we know exactly how she feels.

Of course a character must reveal her complicated feelings, and share her attempts to come to terms with them, but without becoming her own therapist. Analysis is for the engaged reader, and in truth, Schumann leaves much to engage us when all is said, right through to the surprising climax.

The epilogue provides an almost Dickensian summary of how everyone ends up, for readers who like to know these things, and there follows an extended interview with the author on her novel and writing process. Speaking about empathy, a main objective of serious fiction, she remarks, refreshingly, that “blind empathy” can be destructive and unearned. Working hard to “untangle and understand these human impulses” is why writers spend years on their books, she adds.

The Forgotten Hours works hard to bring these complex human impulses to light. If at times it could labor less and leave the reader with more to do, it’s still a compelling read by an accomplished writer.

Colin Brezicki is an award-winning author of novels and short stories. His most recent book is All That Remains.