Forgotten Bastards of the Eastern Front: American Airmen behind the Soviet Lines and the Collapse of the Grand Alliance 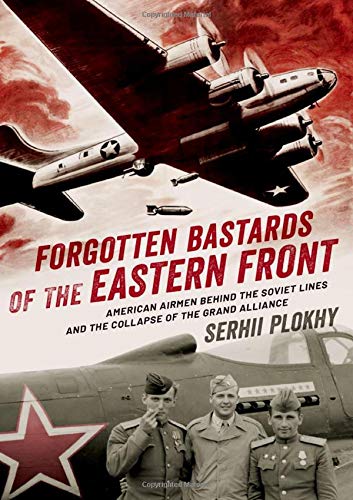 "Well-illustrated and fully annotated, Forgotten Bastards covers its subject on several levels and in a readable style."

In recent times, because of the passing of World War II veterans and the opening of records, lost history about the greatest war emerges from the shadows. Sherhii Plokhy in Forgotten Bastards tells of the Americans Army Air Corps in the Soviet Union, "the war they fought and the peace they bequeathed to us" "but also in the rise and fall of the Grand Alliance."

By November 1943, America and Britain had lost "staggering" numbers of bombers over the area of Germany too far away for fighter protection. The Soviet Union, at the same time, prepared to storm "Hitler's Eastern Wall" in the "Battle of the Dnieper" that "would cost the Russians 1.5 million casualties." No one by then doubted eventual Allied victory, but at what costs?

Amid discussions of a United Nations and the future of Eastern Europe, American and Soviet officials in October 1943 discussed American air bases on Soviet territory to speed up the end of the war. The "highly capable and respected" American Major General John Russell Deane's "prime objective was the coordination of the Soviet-American effort to defeat Germany" and, regarding the bases, "determined to keep peace with the Soviet commanders at almost any price."

Allied occupation of Russian territory at the end of World War I had left bad feelings, and the Soviet Union made impossible demands for the bases. Viacheslav Molotov "recalled that the American offer to open air bases in Soviet territory as nothing short of a land grab by Roosevelt." Both sides feared the ambitions for expansion of the other.

By December 1943, the Soviet Union agreed, "that the commander of the Soviet Air Force would be instructed to start preliminary consultations" on the bases. "Although the door was opening, the hinges were rusty." American General Henry "Hap" Arnold became so desperate that he "wanted landing rights in the USSR but was no longer insisting on bases."

The Soviet air forces did not "try to master the basics of strategic bombing, but their fighter and bomber pilots did exceptionally well in supporting Red Army front-line operations." Creating bases in Russia to meet that need "was a huge task that required extensive planning."

American bombers from Ukraine could attack "German airfields, airplane factories, and oil refineries" and would also divert enemy air forces. Soviet leaders wanted an Allied second front against the Germans but not at risks to Russia. "The Soviet command still did not believe in the benefits of strategic bombings."

The Americans wanted the bases operational before the Allied invasion of France. Initially, they received the ruins of three abandoned unusable bases in the Ukraine for shuttling bombers. "None of the bases much impressed the Americans," including the Soviet standards of diet and sanitation.

Air crews and support personnel arrived in Russia. "They traveled by sea, crossed deserts, mountains, and steppes." Even to them, their final destination remained a secret. Some of the men "had finally arrived there after their epic two-month voyage."

The Soviets insisted on all planes "that their navigators [and radio operators] be on board" and "setting up border posts at the bases." They believed "that the Americans had come to Ukraine not so much to fight the Germans as to spy on the Soviets" "or at least dissemination of anti-Soviet propaganda."

The state security service routinely planted spies on the American bases. American openness contrasted with "the control exercised by the Soviet secret police and counterintelligence officers."

"The Soviets were truly impressed by the instruments that the Americans brought along, their abundance of spare parts, and their professionalism." "Americans were friendly toward the Soviets" although the Russian officials saw "elements of racism in the attitude of some of the officers." They enjoyed their contacts with the Russian people and their culture.

Soviet leaders refused initially to approve a list of targets American bombers as the Russians "did not want to attribute any part of their expected achievement to the results of American bombing" "and did not want them [the Americans] to know where the main thrust of their [the Soviets] attack would take place." The Americans would continue to inform the Russians of the targets but stopped waiting for approval.

The goals of the bombing runs from Russia "had been rendered all but obsolete" as the German Luftwaffe had greatly weakened before June 6, 1944 (D-Day), the same day as the first American bombing raid from Russia. Despite the often bad weather, 18 substantial raids took off from these bases.

German air resources had shrunk considerably but remained very much in the war. A night bombing on the American bases "was a slaughter" brought on by the complete failure of Soviet air defenses.

That relationship of the Americans with the Soviet people eventually deteriorated over culture, politics, women etc. The final base closings represented all of the ugliness of the Cold War.

Well-illustrated and fully annotated, Forgotten Bastards covers its subject on several levels and in a readable style. It does not really meet the claims of its title but it still writes a needed chapter in World War II history in an engaging narrative.