Forgotten Citizens: Deportation, Children, and the Making of American Exiles and Orphans 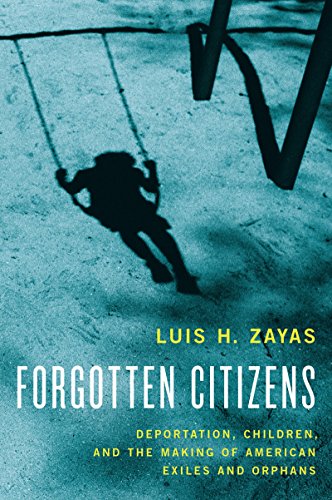 “The case Dr. Zayas makes for immigration reform is compelling . . .”

We tend to believe that the whole world envies our affluence. Who wouldn’t want to flee a life of perpetual struggle and try to grab a slice of the American pie? After all, we are a nation of immigrants, imagining ourselves founded on an ethos embracing all oppressed who aspired to better themselves. But that was then. This is now.

In today’s immigration context, unauthorized migrants who risk life and limb to breach our borders are not welcomed as rugged pioneers or huddled masses yearning to breathe free. Rather, they are labeled illegal aliens, likely to be apprehended at any time and deported, along with any offspring produced during their sojourn even though these children are U.S. citizens

In the last four decades, unauthorized immigrants from Mexico and Central or Latin America have become the target of a groundswell of xenophobia because of their numbers, visibility, and low socio-economic level on entry. Stereotypes associating Latino migrants with drug trafficking, terrorism, economic decline, and misuse of our social services are rampant. The Yellow Peril of yesteryear has been eclipsed by this Brown Peril, in a push for even more conservative immigration policies that are harmful particularly to citizen-children.

In Forgotten Citizens: Deportation, Children and the Making of American Exiles and Orphans, child psychiatrist and social worker Dr. Luis H. Zayas focuses on the plight of over four million U.S.-born children of undocumented migrants who become collateral damage of our aggressive detention and deportation policy.

Although the U.S. Constitution insures that all persons born in our country are citizens with equal protection under the law, in practice minor children are unable to fully exercise these rights and are at the mercy of the legal system when their undocumented parents are apprehended.

Dr. Zayas draws on a long career as a researcher, psychiatric clinician and immigrant advocate to show the impact of the constant threat of parental expulsion on these citizen-children and their families. Set against the backdrop of evolving U.S. immigration policy, Dr. Zayas uses vivid case studies to show how its implementation abrogates children’s rights, undermines their mental health, and leaves lasting psychological trauma.

We hear from Virginia, a kindergartener so conditioned to heeding her parents’ warnings not to reveal her family’s illegal status that she hasn’t spoken in school for over a year. On the other hand, 10-year-old Daisy asked Michelle Obama straight out on a visit to her school why the president was taking away people that didn’t have papers, like her mother.

Meanwhile, Brandon, exiled with his family to Mexico, worries that his father will die in the desert attempting to immigrate again. And Valerie, one of three U.S.-born siblings in a tight-knit mixed-status family, has been deeply traumatized by her father’s detention and deportation such that she exhibited irritability and withdrawal for a whole year after he managed to return.

“They are American children, born, raised, schooled and socialized as members of the United States. The United States is not only their birthplace but also, for most of them, the only home they have ever known. . . . The children are average American kids but only to a point, because they cannot relax their vigilance in protection of their parents and themselves.”

These children have strict rules of conduct drilled into them by parents and siblings since babyhood, reinforced by the culture of their communities. “Don’t talk,” “sit still, “watch out,” “do not attract attention,” “be careful who you speak to,” and similar admonitions. They become acutely aware, very young, as this 11-year-old girl says of her parents: “One day, they can just take them away, like that, in a second.”

“This means that their stress response system must always be ‘on,’ alert to dangers related to their parents’ legal status.” So it is not surprising that citizen-children are prone to anxiety, nightmares, fear of separation, depression, acting out, and other clinical indicators of poor mental health.

Of course, the illegal parents share these nightmares and more. One of the most invidious dilemmas for parents is the agonizing Sophie’s Choice many face when threatened with deportation. They must triage via a lose-lose selection—will their citizen-children be better off as de facto orphans, left behind with relatives, or friends, or in foster care? Or should the family remain intact and be removed as a unit to the parents’ place of origin, exiling the American citizen-children to a foreign country where education, health care, and personal security may be far beneath the level to which they are accustomed?

Dr. Zayas relies for primary data on personal interviews with his migrant clients and research subjects, letting them speak in their own voices about their predicaments. The outcome is a highly empathetic and readable narrative, interspliced with a minimum of technical jargon.

However, the theoretical foundations and operationalization of the concepts and measures of child mental health on which the clinician’s interpretations are based seem to be themselves somewhat arbitrary, though evaluation of past, present, and future socio-psychological trauma is subject to considerable uncertainty. The issues at play seem far more complicated than can be entered in boxes on a clinical checklist.

Nonetheless, Forgotten Citizens is invaluable in putting a human face on the suffering of the silenced casualties of our draconian immigration policy. In so doing, the book holds up a mirror to a nation far removed from the humanitarian ideals of its roots. This reflection is not pretty.

The tales Dr. Zayas tells so compassionately show him to be a caring clinician and advocate for his clients with a driving desire to see justice done for all migrants. In the last section of the book, he outlines steps that can be taken to reform the most egregious human insensitivities in the enforcement of the highly contentious immigration law.

Suggested reform priorities include that the “best interests of the child” must be considered in immigration court as well as in family court; the various government agencies involved in citizen-child welfare decisions must communicate with each other more effectively; the arbitrary cap on deportation cancellation grants permitted each year (4,000) must be revoked; immigration judges need to make more consistent rulings on what falls under the “extreme and exceptionally unusual hardship” principle for appealing deportation.

The case Dr. Zayas makes for immigration reform is compelling. But will enough of us be able to sidestep partisan politics and discard our prejudices and fear of “the other” to take action to realize the American promise of a just society which ultimately is in the best interests of us all?