Forget "Having It All": How America Messed Up Motherhood--and How to Fix It 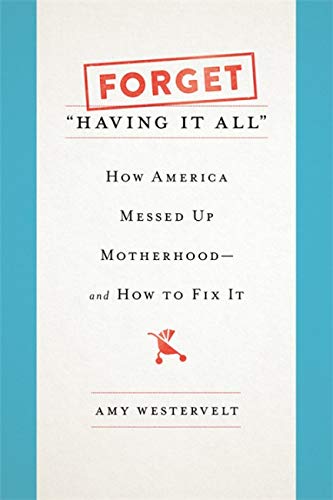 The author begins this book “hip-deep in the chaos that is modern American motherhood” but hastily clarifies that, while her own experience provided the impetus to write the book, it is not autobiographical. Indeed, throughout she references a wide range of previous and current feminist sources on “motherhood,” which is seen as a key frontier in the fight for gender equality as well as “the lynch-pin to systemic transformation.”

Westervelt shows that while there is growing equality in the workplace this is not mirrored in the family. Even in countries and companies where parental leave provisions exist there has been relatively little take-up by men. She sees a key to resolving this is to find a way to endow behaviors and qualities associated with motherhood with a positive social value such that men as well as women would be eager to parent.

Westervelt reviews various ideologies of motherhood primarily in an American context beginning with the arrival of the Puritans in the New World. She demonstrates that African American families and those of Native American women had an approach to mothering that was much more community-minded and that the kind of community-mothering that was the norm has proved to be far more resilient and adaptable than the nuclear family model embraced by Europeans.

This narrative lays the ground for her interesting discussion of the different positions on mothering and work-life balance taken by white middle-class and black feminists, both equally valid on their own terms. Outside the white middle-class mothers were obliged to work outside the home as well as in it, at the same time feeling that parenting was not a chore or a trap, but rather the relationship in which they were most affirmed and appreciated.

An interesting chapter describes the medicalization of reproduction at the hands of male doctors which gave rise to what historians call “scientific” rather than emotional motherhood dominated by schedules and routines. This brings to mind what Betty Friedan wrote in her groundbreaking and perhaps now somewhat overlooked book The Feminine Mystique (1963) about the needless overcomplication of housework rituals to convince women that staying home could be a career. Being a Tiger Mother can also be a full-time job.

While recognizing that women still face many obstacles to achieving equality,  several of them well-highlighted by the #MeToo movement, Westerwelt considers that it is time to stress (again) that patriarchy is bad for men also and “we need to ensure that men are not left behind by either the education system or the environment, that they are welcomed into a new and more caring era, and that they are supported by the transition, not left to struggle alone.”

Westerwelt wears her learning lightly and this is a book to be enjoyed by both professional and popular audiences.