The Forest for the Trees: An Editor's Advice to Writers 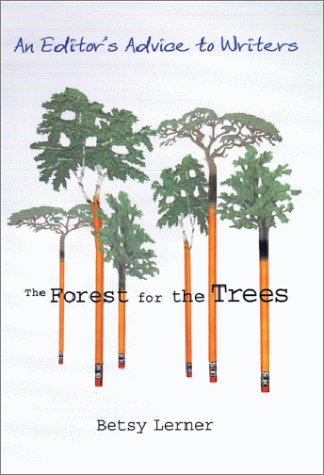 The revised and updated edition of The Forest for the Trees revisits the writer’s 2000 book that details the publishing process not just from the view of a published author, nor a book editor, nor a book agent, but rather from all three. With a Master of Fine Arts from Columbia University, author Betsy Lerner was the recipient of three writing award prior to become an editor for some 15 years, and is currently an agent and partner at a literary agency.

In short, she represents all of the individuals that all aspiring writers hope to please: colleague, publisher, editor, agent and reader. And, after The Forest and learning the concerns of each of those five parties, one feels a bit more confident in knowing the seemingly arcane process of by which an idea ends up on paper in the local store.

Written in a knowing but not condescending tone, The Forest reads like a helpful and concerned friend that’s seen and done it all in the publishing world. Laid out in a similar fashion to Stephen King’s book about writing—titled, appropriately enough, On Writing—The Forest is split into two complementing halves. The first half of Lerner’s book is Writing and the second is Publishing. The former is more the “forest” of her title as it outlines her own literary path and the various archetypes of writers and the holistic writing process; conversely, the latter is the “trees” portion as she delves into more practical matters and lays out the selection, editing, and publication process and what most editors and agents are looking for as well as (perhaps more importantly) what they are not.

Replete with the author’s own experiences, a hint of veracity runs throughout the book. She skewers authors that insist that they only write because they get paid for it noting, “[s]how me a blockhead who says he writes for the money, and I’ll show you a big fat liar.” But she also has little time for those that say that money is beneath a true artist, quoting Stephen King who observed that “people who think about ‘literature’ stop thinking about you and assume that any writer who is popular across a wide spectrum has nothing say. The unspoken postulate is that intelligence is rare.” Lerner understands that most writers are somewhere in the middle—or at least hope to be some day.

Along for the ride are appearances from Dickens, Capote, and Cheever, among others—all of whom she uses to great effect to highlight some particular point on the path from concept to (hopeful) publication and even beyond. In fact, she devotes the last chapter to what happens after publication, opening it with a somber quote from James Purdy, “in a line so dark and forbidding one feels the need to avert one’s eyes” and one this reviewer will not reprint here. That last chapter discerns that publication is only another step in the writer’s journey and one that, for most true writers never ends. Earlier in the book, Lerner makes it a special point to note that Grisham started writing his second novel the day after finishing his first “and more important, long before the world responded with a resounding yawn.”

If you’re looking for a book that details how many pages to include in a cover letter, which publishing house is best for your vampire story, or how to contact a particular agent, this is not that book; Lerner does, however, note which book you actually need to purchase to accomplish this aspect of the publishing process in her chapter entitled “Making Contact.” However, once you do find that book, you should consider dropping this into your shopping basket as well to prod you along the process of acquiring that elusive publishing contract.