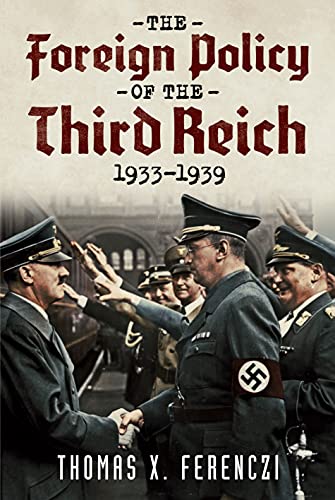 “Thomas Ferenczi has written a concise, primary-sourced, and fact-based history of Nazi Germany’s foreign policy between 1933 and 1939.”

Thomas Ferenczi has written a concise, primary-sourced, and fact-based history of Nazi Germany’s foreign policy between 1933 and 1939. Adolf Hitler conducted foreign policy by, in the author’s words, “spidery manipulation, deliberate deception, and uncompromising coercion,” and during these seven years he achieved success after success.

Hitler, the author writes, had four main foreign policy goals: (1) to abrogate the restrictions of the Versailles Treaty as applied to Germany; (2) to incorporate Austria into the Reich; (3) to establish a greater German Reich in lands where the German population was significant; and (4) to acquire “living space” in the east. Hitler accomplished the first three, but ultimately failed to achieve the fourth—and that failure in the end sealed the Reich’s doom.

The German Fuhrer had signaled much of his agenda in Mein Kampf, which he wrote before he attained power in Germany, yet he was able to repeatedly deceive the statesmen of Europe’s great powers, especially French and British leaders. Hitler, Ferenczi writes, “had been shrewd enough to identify the irresoluteness in his European contemporaries, in particular those statesmen with democratic inclinations.”

Although Ferenczi does not discuss it in depth, Europe’s democratic leaders’ irresolution stemmed at least in part from their recollections of the horrors of the First World War. Britain’s Stanley Baldwin and Neville Chamberlain, and France’s leaders in the 1930s, genuinely sought to avoid the bloodshed and destruction of another world war. And they fell for Hitler’s professions of peaceful intentions. The German Fuhrer repeatedly assured Western statesmen that his foreign policy goals were limited to righting the “wrongs” of Versailles.

In fact, as Ferenczi shows, Hitler wanted a war of conquest, annihilation, and enslavement in Eastern Europe and Soviet Russia. He hoped that he could reach a deal with Great Britain whereby the British Empire would be spared as long as it stood by as he marched east. Time and again, publicly and privately, Hitler made favorable references to the British Empire. He believed, Ferenczi notes, that “it was Britain . . . that stood in the way of German supremacy on the Continent.”

Ferenczi tells a familiar tale: Germany’s covert then overt rearmament; Hitler’s gradual partnership with Italy’s Mussolini; the occupation of the Rhineland; the Anschluss with Austria; the Western democracies’ surrender at Munich and the annexation of Czechoslovakia into the Reich; pressure on Poland; and finally the Nazi-Soviet Pact, which paved the way for war.

Throughout these seven years, Europe’s diplomats worked feverishly to avoid war. They first sought to appease Hitler, then when they finally recognized that appeasement wouldn’t work, they tried to construct a collective security arrangement to stop German expansion, but each time Hitler’s diplomacy foiled their efforts. He always seemed to be a step ahead of his rivals.

For seven years, right up to the German invasion of Poland on September 1, 1939, Hitler deceptively held out the possibility of peace, when in fact he was busy preparing for war. “Hitler trumpeted peace, time and time again,” Ferenczi writes, “[a]nd it worked.”

Ironically, Hitler’s diplomatic victories produced in him a hubris that led to his downfall and Germany’s defeat. But not before Europe and the world suffered death, devastation, and destruction on a scale never before seen.