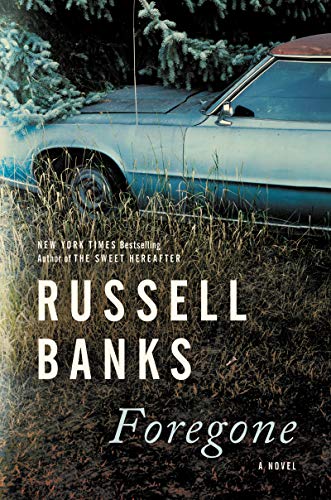 “Foregone unfolds as a daring and deftly constructed film-within-a-novel about the ethical quagmire of deathbed confession. . . . Foregone is a remarkable reflection on the ways that guilt, regret, narcissism, faulty memory, not knowing when to shut up, and simply running out of time shape the stories we tell at the end of our lives, and how quickly we lose control of those stories after we die.”

Russell Banks’s new novel, Foregone, begins with a dying documentary filmmaker, Leonard Fife, being wheeled into his living room by his live-in nurse, and querying her semi-ironically, “Tell me why I agreed to do this.”

Renowned among cinema cognoscenti and revered on the Canadian Left, American-born but living in Canada since the Vietnam era, Fife has promised his former student, Malcolm McLeod—a thoroughly canonized “Ken Burns of the North” who specializes in “soft-focused liberal takes” on Canadian history—that he will sit for an interview that will form the basis of a documentary that Fife won’t live to see. The agreed-upon subject is Fife’s acclaimed work as a fearless, uncompromising political filmmaker, and the vision behind the films.

MacLeod has just arrived with a skeleton crew and detailed plans to draw from his wraith-like, cancer-ravaged mentor the story he has already decided his film will tell: “Malcolm has written out twenty-five questions designed to seduce Fife into making the kind of provocative and sometimes profound remarks and observations that he is famous for.”

But Fife has no intention of giving MacLeod what he wants. He refuses even to respond to gentle nudging toward the purported subject at hand, or to indulge his protégé’s weak attempts to lighten the mood, such as suggesting that Fife must be happy to be spending his last days at home with his wife, rather than dying in the unfamiliar confines of a hospital. Fife replies, “There’s no more being happy or happier, Malcolm. He’d like to add— but doesn’t—that for him now there’s only more pain and less pain, more and less nausea and diarrhea, more and less dread, more and less fear. Along with more and less shame, anger, embarrassment, anxiety, depression. And more and less confusion.”

As the interview—such as it is—proceeds, Fife chooses to treat his darkened living room as a deathbed confessional, with his third wife, Emma, stationed at his side as his chosen confessor. Insisting that he needs the rolling camera, spotlight, and boom mic to divulge the dark secrets of his early life to the woman sitting beside him without evasion or deception, Fife leads his perplexed audience through a disjointed series of interlocking and incomplete narratives detailing his abandonment of his first two families and the circumstances of his immigration to Canada in 1968. Though Fife has chronicled the experiences of American draft resisters exiled to Canada in his documentary work, their story (contrary to what MacLeod and others have long assumed) is not his.

Despite Fife’s steadfast refusal to give MacLeod anything resembling the story he’d prefer to tell, Banks reveals early on that the film does indeed get made, albeit along different lines than its director intended. “Here begins Malcolm MacLeod’s controversial film Oh, Canada,” Banks writes. “Although brilliantly shot and edited by MacLeod and produced by his wife Diana in the late Leonard Fife’s own manner, it is in some ways a disheartening, disillusioning film about Fife, one of Canada’s most celebrated and admired documentary filmmakers. Oh, Canada shocked and disappointed the millions of Canadians who admired Leonard Fife for being one of those sixty thousand Americans who fled north in the late 1960s to escape being sent by the American government to kill or die in Vietnam. While his filmed deathbed confession may have been cathartic for Fife himself, it has brought many Canadians to question their past and present national policy of offering asylum to so-called refugees.”

And thus Foregone unfolds as a daring and deftly constructed film-within-a-novel about the ethical quagmire of deathbed confession. With even its extended flashbacks told in the present tense, as if Fife were watching these scenes from his life as he recounts them, Foregone at times feels like a film recreated in written form, somewhat like the detailed renderings of Hector Mann’s silent films in Paul Auster’s The Book of Illusions. Fife’s memories are remarkably vivid, although stylistically Foregone is never as lushly cinematic as Banks’s 2008 novel The Reserve.

Foregone is not just a novel about the stories a dying man tells; it’s also about the strange and staged conditions in which he tells them, his reasons for unburdening himself at this late hour and in this context, the complicating question of whether the self-incriminating stories he’s telling are even true, and whether he’s willfully lying or simply misremembering as his faculties fail.

Emma insists to the filmmakers that she knows these stories and they didn’t happen as Fife is recounting them; he’s just confused. Banks leaves this he said-she said question unresolved, and to MacLeod, of course, it’s just more fodder for the film he’s re-conceiving on the fly, and confident he can save in the editing room. Fife plunges ahead well aware that the story of his life will cease to be his own once it’s in the younger filmmaker’s hands.

There are moments when Fife seems on the verge of giving MacLeod what he wants, such as his tantalizing descriptions of youthful encounters with a pre-Dylan Bobby Zimmerman in Boston in 1960. MacLeod also perks up at Fife’s brief mention of Joan Baez’s 1969 appearance at Toronto’s Mariposa Folk Festival, where she famously shocked the socks off her audience by chastising draft resisters in for not staying home and challenging the war machine directly by going to jail like her then-husband David Harris. But the dying director refuses to digress from his too-personal tale for long.

The other complicating factor is that some of these stories—Fife’s teenage cross-country road trip in a stolen car with his best friend, his desertion of his hopelessly out-of-her-depth Floridian first wife and their daughter a few years later—are also episodes from Banks’s own life.

Foregone doesn’t read like a guilt-ridden author’s cathartic end-of-life unburdening in the manner of Henry Roth’s Mercy of a Rude Stream. For one thing, Banks isn’t at death’s door like Fife is, although he did sit for such an interview under the glare of a single spotlight in his darkened living room in 2016. Foregone is also not as overtly personal as the opening essay of Voyager, Banks’s 2015 collection of travel writing, though it draws on some of the same chapters in Banks’s biography, including his early marriages.

But Fife’s insistence that he has damning information to share with Emma that he can only tell with the camera rolling and pointed at him, and the question of his muddled motives certainly recall Roth’s truly confounding strategy for preserving the Yiddish-speaking Jewish diaspora milieu of his youth by writing books that he must have known would be largely remembered for revealing revolting personal secrets.

But whereas Mercy of a Rude Stream raised relevant questions about Roth’s intentions, Foregone (despite its autobiographical elements) keeps the focus on Fife’s motives, rather than those of its author. In that sense, Foregone bears more resemblance to Paul Auster’s Invisible, which is told in four sections by four non-aligning narrators—somewhat like Banks’s The Sweet Hereafter—and repeatedly (and quite gloriously) makes metafictional mincemeat of end-of-life autobiography.

Like Invisible, Foregone is a remarkable reflection on the ways that guilt, regret, narcissism, faulty memory, not knowing when to shut up, and simply running out of time shape the stories we tell at the end of our lives, and how quickly we lose control of those stories after we die.

Foregone does raise one fascinating issue about the relationship of Banks’s work to his life. In Robert Niemi’s 1997 biography of Banks, he quotes a 1987 interview with the author, in which Banks discussed how his early experience has continued to inform the worldview expressed in his writing: “I still view myself in the larger world the way I did when I was an adolescent . . . The delusion is that success will change you—it’s the American dream—you can kill the old person and become a new one.”

In Foregone, Fife recognizes that success has not changed or redeemed him. Fundamentally, he remains the same man who deserted two families, the man who left his country behind to break free of his second wife, son, and in-laws, while letting others believe that fled to Canada for noble reasons.

“You are who you are and you cannot change, right? Or can you?” Fife muses. “Isn’t that what he’s been trying to accomplish by putting himself in front of Malcolm’s camera with Emma in the audience? . . . He’s trying to become at the last possible minute a different person than he has been for his entire life. He can’t atone for the person he was and forgive himself for the sins and crimes he committed without first changing who he was and is.”

Thirty-four years have passed since Banks gave that interview in which he insisted on the immutability of identity as established early in life. Foregone revisits the subject half a lifetime later. If a dying man’s seemingly ill-advised unburdening might somehow yield 11th-hour transformation, such a conclusion to a Russell Banks book is anything but foregone.