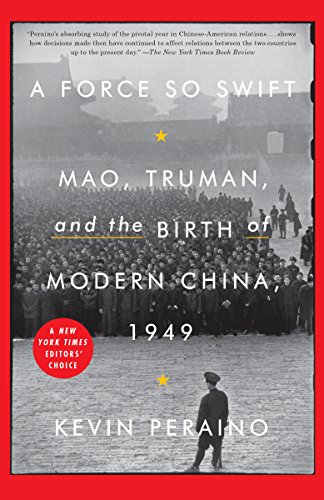 Statesmen are rightly judged by the consequences of their policies; results, not intentions, matter most. Historians commonly rank Harry Truman as one of our near great presidents, citing the Truman Doctrine, Marshall Plan, Berlin Airlift, and the formation of NATO.

Truman’s successes in Europe, however, should not overshadow his failures in Asia. On Truman’s watch, China was conquered by Mao Zedong’s communist forces; Mao’s China became an ally of our principal adversary, Stalin’s Soviet Union; China and Soviet Russia backed North Korea’s invasion of South Korea; and communist forces in Southeast Asia began their long struggle to conquer Indochina.

As Kevin Peraino, a veteran foreign correspondent and Newsweek bureau chief, points out in A Force So Swift (now out in paperback), the key event in the immediate post-World War II world was Mao’s victory in China in 1949. It “provoked a reaction across the Pacific; by the end of the year, the United States had extended its policy of containing Communism, once limited primarily to Europe, to Asia as well.”

Though Peraino does not mention it, Mao’s victory over Nationalist forces and the subsequent formation of the Sino-Soviet bloc presented the U.S. and its allies with Sir Halford Mackinder’s geopolitical nightmare: a hostile alliance of powers in control of the Eurasian landmass.

Peraino’s approach to the pivotal year of 1949 is to chronicle the key events in China and describe the American responses to those events. It is a crisply written, compelling narrative that highlights the roles of key U.S. policymakers such as Dean Acheson, George Marshall, Louis Johnson, and George Kennan.

The Truman administration, Peraino notes, tried to avoid taking sides in China’s civil war and eventually cut off aid to the Nationalist government led by Chiang Kai-shek, its wartime ally. Truman and Acheson accepted the inevitability of Mao’s victory. Peraino, like most historians of the period, accepts the conventional view that nothing the U.S. could have done would have stopped the communists from gaining power.

That conventional view, however, has come under attack by Michael J. Green, a former NSC staffer and Asia scholar at the Center for Strategic and International Studies. In his book By More than Providence: Grand Strategy and American Power in the Asia-Pacific Since 1783, Green claims that the “Communist victory . . . was far from secure, and its margin of victory in the civil war was thinner than it might appear to have been.” Continued American aid to the Nationalists, Green believes, might have produced a stalemate.

Peraino notes that the debate over U.S. China policy was fierce and unforgiving, and would ultimately lead to the domestic political controversy over “who lost China.” Peraino alludes to, but skips over, that debate.

As Mao’s forces gained the upper hand in the war, pro-Chiang U.S. congressmen and senators, including Walter Judd from Minnesota (an old Truman friend) and the young John F. Kennedy from Massachusetts, urged on by the brilliant and enchanting Madame Chiang Kai-shek, attacked Truman for abandoning the Nationalists. Kennedy remarked: “Our policy in China has reaped the whirlwind . . . What our young men had saved our diplomats and our president have frittered away.”

Truman and Acheson responded to congressional attacks with the China White Paper, which, the author notes, blamed Chiang for the loss of China and absolved American policymakers of any policy mistakes. Some in the administration hoped that abandoning Chiang would wean Mao from his Soviet ally, but as Peraino writes, “[t]he Truman Administration’s assault on Chiang did nothing to win Mao’s goodwill.”

When Chiang fled to the island of Taiwan, Acheson urged Truman to forego supplying him with military assistance because in Acheson’s view Taiwan was of little or no strategic importance—a view ridiculed by General Douglas MacArthur and others.

Acheson more famously announced in early 1950 that the Korean peninsula, too, was outside of America’s defense perimeter in Asia—a policy misjudgment that would cost over two and a half million lives, including almost 37,000 American dead.

Despite this record of failure in Asia, Peraino sympathizes with Acheson and Truman. He admires Acheson’s unsentimental and realist approach to global politics. He praises Truman for his courage and idealism. He even credits the Truman administration for “pointing the way” to the successful Nixon-Kissinger opening to China in the early 1970s.

In the end, however, Peraino is too honest a chronicler to completely absolve Truman and Acheson for their policy debacles in Asia and the disastrous legacy of the events of 1949. China is the principal challenger to the U.S.-led world order in the 21st century. North Korea threatens the world with nuclear weapons. Taiwan remains a flashpoint for conflict. “[T]he quarrels of 1949,” Peraino concludes, “endure.”