The Force: A Novel 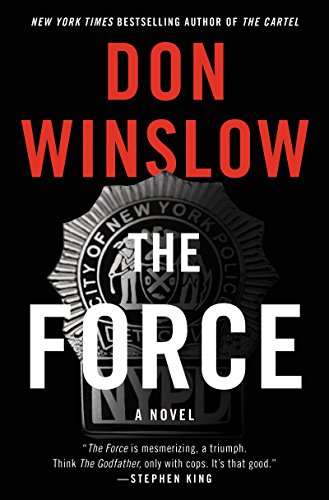 Manhattan North. The Kingdom. Drug dealers. Extortionists. Pimps. Pill-popping cold-blooded killers. All ruled by their beloved Denny “the King of Manhattan North,” Malone, or simply Malone as he’s known throughout the territory and beyond. Loved, hated, and feared in equal measures, Malone tolerates no dissent. Those foolish enough to try, find themselves confronting the kings deadly band of faithful knights of the realm: Russo, Big Monty, Billy O’Neill, and newbie squire, Levin.

If the good people of Manhattan North are looking for the cops to protect them against Malone, they have a problem. A major problem: Malone and his knights are the cops. . . .

Malone is a highly decorated NYPD detective sergeant and undisputed leader of “Da Force.” He and his crew are the smartest, the toughest, the quickest, the bravest, and the baddest, an elite special unit given unrestricted authority to wage war on gangs, drugs, and guns.

Every day and every night for the 18 years he’s spent on the Job, Malone has served fearlessly on the front lines, witnessing the hurt, the dead, the victims, the perpetrators. He’s done whatever it takes to serve and protect in a city built by ambition and corruption, where no one is clean—especially Malone himself.

Malone and his crew have stolen millions of dollars in drugs and cash in the wake of the biggest heroin bust in the city’s history; yet they still regard themselves not only as cops, but damn good cops. The best.

But burning both ends almost inevitably always ends in disaster, and it does. Malone is caught by the Feds and squeezed to inform on all his dirty dealings and dirty cops, his friends and brothers of Da Force. Now to avoid a life behind bars and shame raining down on his children, he must become the one thing he has always hated and despised: a two-legged rat.

“The last guy on earth anyone ever expected to end up in the Metropolitan Correctional Centre on Park Row was Denny Malone. You said the mayor, the president of the United States, the pope—people in New York would have odds they’d see them behind bars before they saw Detective First Grade Dennis John Malone.”

Yet here he sits, pondering where it all went long; how long will he survive in prison?

Malone must walk the thin line between betraying his brothers and partners, the Job, his family, and the woman he loves, trying to survive, body and soul, while the city teeters on the brink of a racial conflagration that could destroy them all.

The Feds may think they have Malone at long last where they want, but he isn’t finished yet. As they’re about to discover, Malone’s redemption is at hand, and it is they who should be fearful of Malone, not vice versa.

Don Winslow spend years researching inside the NYPD to create The Force, and it shows. It has authenticity written all over it, from beginning to end. Before the reader gets into the actually story, however, three pages chillingly list the names of police personnel to be killed in the line of duty, during the time of writing and researching. It is a sobering and thought-provoking list, to say the least, and makes one wonder why a man or woman would choose such a deadly and at times thankless career.

It has been said that you could rebuild Dublin, brick by brick by using Dubliners by James Joyce as a template. The same could be said of rebuilding the neighborhoods of Manhattan North by reading The Force, such has Winslow painstakingly blueprinted it.

The Force is a relentless, heart-stopping, page-turning tour de force, filled with unforgettable villains and heroes, equally flawed with a mixture of good and evil. It is Don Winslow’s magnum opus, destined to become a classic.