Footprints: In Search of Future Fossils 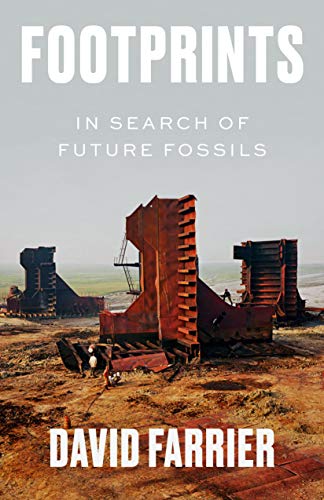 “a powerful and fascinating approach to the great crisis of our time. And it gets to the heart of why climate change such a vexing and all-encompassing challenge.”

“If a New World were discovered now, would we be able to see it?”

Climate change offers our species myriad challenges. Foremost among them is contending with its immensity. In other words, it isn’t merely the technical challenges, or even the political ones, that prevent us from taking meaningful action. The problem is that we can’t even begin to wrap our minds around what’s happening because we evolved to think in terms of our little lives. Climate change is a global crisis, and it can only be understood in terms of deep time. It is a crisis that is beyond anything we’ve had to contend with before. How can we possibly understand something so vast and complex that its impact will outlast not only our individual lives, but also our civilizations, perhaps even our species?

David Farrier’s Footprints: In Search of Future Fossils seeks to understand the immensity of climate change by asking not what we say about ourselves, but what our descendants will uncover. Footprints takes a look at various elements of the climate crisis—rising seas, dying coral reefs, etc.—and how each will impact the fossil record. In doing so, we begin to see the magnitude of the transformation our planet is undergoing. This is an exploration of deep time. For climate change—even if, in the best-case scenario, we survive—is ushering in a new geological era.

Anyone who has wandered through ruins has wondered what the people living there would have thought of their own lives. How close are our modern perceptions of them to their conceptions of themselves? In some ways, ancient people are impossibly enigmatic, the more so as they are more distant from our own time.

I can recall working on an archeological dig in northern Spain—cave people, living tens of thousands of years ago—and there was really so little we could know of them. At the same time, we could see some things about their lives that they could not, because of our perspective. In what endures after thousands of years, we can see something of the unspoken values of a people. And that’s precisely what Footprints reveals to us. The stories we tell ourselves about who we are, about what we value, aren’t really the whole story. The Earth will tell a different story.

Farrier’s background is in literature, not science, and the more literary elements of his work tend to be the most effective. But even his science is clear and well-written. That said, Footprints would have been even more powerful if it focused a bit more on uncovering not merely the facts of how we are irrevocably changing the planet, but also excavating what those facts tell about us—the hidden story revealed in the future fossil record—and how we might use that revelation to change.

This is, all told, a powerful and fascinating approach to the great crisis of our time. And it gets to the heart of why climate change such a vexing and all-encompassing challenge. While each future fossil has a unique story, collectively they represent a radical transformation of the physical composition of the planet.

Ultimately, there is an unspoken optimism in the work, for it assumes that there will be people to dig up these fossils. And if they do, if they are still around, in addition to the radical changes to the geological record, there will have had to have been a radical transformation in our way of thinking, of living. A new story will be told. This, above all else, is the lesson to learn from our future fossils.

Theodore Richards is a philosopher, poet, novelist, and memoirist. He is founder of The Chicago Wisdom Project and editor of the online magazine Re-imagining Education—Culture—World. His most recent book is A Letter to my Daughters: Remembering the Lost Dimensions & the Texture of Life, winner of a 2019 Independent Book Award Gold Medal for Autobiography/Memoir.