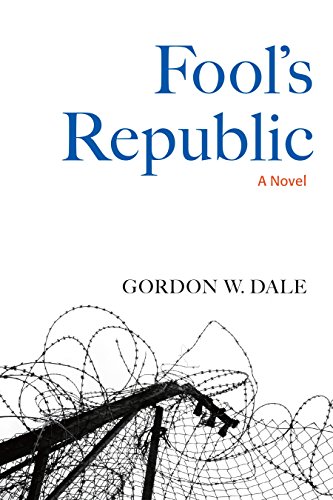 Citizens’ stories of state abuse, from secret wiretapping to unjust imprisonment and worse, make headlines daily. In the hands of novelist Gordon W. Dale, they drive a masterful political thriller.

As Fool’s Republic opens, protagonist Simon Wyley floats in a tiny all-white cell. A short-order cook with a genius-level IQ, Wyley has had a steady job for 20 years, paid his taxes, kept to himself. A dedicated husband and father, he’s a model citizen. So why is he being held? This is the intriguing conundrum in Gordon D. Dale’s political thriller.

Wyley is accused of committing crimes against the state—the charges are always implied, never specified—and is being held without formal charge, benefit of counsel, or due process of law. He confuses and confounds his interrogators using the only weapons at his disposal, irony and whimsy, to challenge their arrogance and false assumptions. As Wyley’s journey proceeds, we develop a deeper understanding of the man behind the wisecracks and of the society that has imprisoned him:

“I float in an eight by eight cell of the purest clinical white: white walls, white sheets, white toilet, white sink, white light. Even the floor drain has been painted white. This drain worries me, sitting as it does in a slight recess in the floor, with no apparent purpose except to sluice away evidence. I stare at it, obsessed with images of red blood spilling down white tiles, like a pour painting by a trendy New York artist whose name I no longer recall.

“I am attired in madhouse whites to match my cell: disposable briefs under white cotton pants, a white short-sleeved shirt, white slip-on canvas shoes without socks. My head has been shaved. I am denied access to a mirror, but no doubt my skull is also white, as white as the skin of my arms and hands. White skin over red blood. It occurs to me that I am afraid.”

Mr. Dale’s writing is stripped to the very bone, much like his hero Simon Wyley, with not one once of wastage on any page. This is an important and timely book, as well as a moral barometer for the uncertain times we are living in. It shows that abuse can be carried out with impunity by the State upon its citizens if left unchecked by an indifferent or cowed citizenry.

Ultimately, Fool’s Republic: A Novel is a powerful psychological thriller about freedom, and how far we are willing to go to secure that freedom—or lose it by lack of action. The power of the book is not simply the story, but also the breathtaking prose used to tell that story. A must-read book for those looking for a page-turning and intelligence thriller.