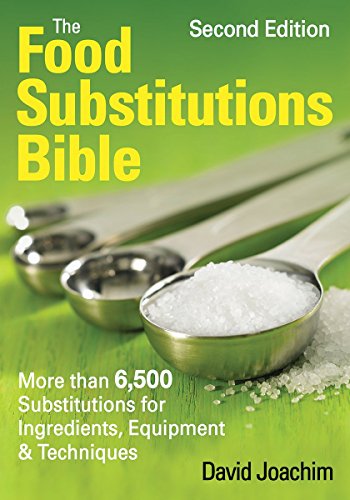 The Food Substitutions Bible does not, at first glance, look like a book to snuggle under the covers with and read for a while. Made up of short entries from A1 sauce to zwieback, the book certainly works as a quick reference guide—but look out, because this is a book that sucks a reader in, jumping from obvious to obscure entries with ease.

In this, the second edition, author David Joachim has added 1,500 new substitutions, as well as a host of guides and tables at the end of the book. On each page, the first column gives the ingredient name (some cooking equipment is also listed) and a brief bit of information about it, ranging from a definition or a bit of trivia all the way to a quote from M.F.K. Fisher. The second column has the “if you don’t have it” list of substitutions, which may be another ingredient or a recipe to approximate the one listed; where applicable, Joachim lists “for better health” and “to vary the flavor” suggestions (for example, using blackberry liqueur in place of cranberry liqueur).

So look up barbecue sauce, and you find suggestions for using ketchup with a touch of liquid smoke, or canned barbecue Sloppy Joe sauce, and a recipe for homemade sauce. At the bottom of the entry, there’s “see also Chinese barbecue sauce,” but before you can go there, you glance up at the rest of the page, and there is “baobab leaf” just waiting to be studied, and Barbados cherry, for which you have to flip to acerola, and there you find ackee, and acitrón, for which you need to flip to nopale, and—oh, wait, what about Chinese barbecue sauce? If you give a moose a muffin . . .

Some of the most useful entries cover extremely common ingredients. Cream and milk, for example, offer a wealth of substitutions. How to make half-and-half? There’s the obvious (mix half milk, half light cream), but also suggestions to mix a touch of melted butter with whole milk, or ¾ cup whole milk and ¼ cup heavy cream, or a cup of evaporated milk if needed for baking. For light cream, which is not available across the country, Joachim gives the proportions for melted butter to whole milk and evaporated milk to whole milk. It doesn’t cover all the possibilities for substituting for whole milk, so if you keep, say, 1 percent milk and cream in the refrigerator, you won’t find an exact match. But Joachim does give suggestions for mixing 2 percent milk and half-and-half, or half-and-half and water, or water, dry milk, and melted butter. With all the options here, a cook can figure out his own blend based on what’s in the fridge.

Some entries, on the other hand, are a bit too obvious (under “pasta, dried shapes,” the substitutions listed are simply different shapes such as shells, rotini, wagon wheels, penne, and ziti), or don’t fully explain how to make a substitution work (using phyllo in place of puff pastry, for example). But many are quite practical, and in just the right quantities, such as the ingredients needed to make a teaspoon of pumpkin pie spice.

At the end of the alphabetical list, a long appendix offers ingredient guides and measurement equivalents. Among others, the guides cover apple varieties, with notes on texture, flavor, and best uses for each apple; dried beans, with characteristics and substitutes for each; fresh and dried chiles; clams; coffee; crabs; edible flowers; flours, with best uses for each; a thorough list of honeys, noting flavors, colors, and which crystallize quickly; lentils; mushrooms; Asian noodles; oils, with characteristics and smoke points; potatoes; rice; and vinegars.

The measurement equivalents cover pan sizes (including the filled volume for each, but with no notes about approximate batter amounts each should hold); imperial to metric conversions; cooked sugar stages; and a great chart on alcohol retention in cooking (useful for cooks who don’t want to get their kids drunk off a pot of fondue, or who don’t want to get the mother-in-law accidentally soused from a flambéed dish).

Readers may wish for some other information, but noting what’s missing qualifies more as quibbles than true complaints, such as wishing for more pronunciation guidance on unfamiliar ingredients, or a more complete list of apple varieties and their uses (the list isn’t short, but excludes some new standards, such as Honeycrisp apples). Most likely, though, a cook’s main complaint may be that the book is a little too good—it’s just too easy to wander off through its pages.