Food and Place: A Critical Exploration 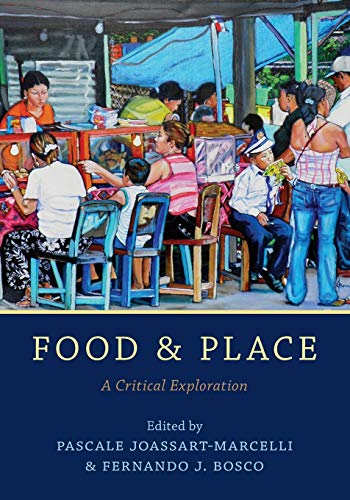 It could be argued that the core of both cultural and national identity lies in our stomachs! That is, food is central to cultural recognition and reproduction and is strongly rooted in place as humanized territorialized space.

People all over the world affirm community affiliation by eating identifier foods together. We solidify family, observe the change of seasons, participate in rites of passage, cope with homesickness, celebrate community festivities, and perform religious practices as well as mark other milestones through production and shared consumption of traditional foods.

Foods also reinforce the imagining of national identity. For the majority of Americans it is not really Thanksgiving without roast turkey and pumpkin pie. And many Britons still assert that only roast beef and Yorkshire pudding is the proper Sunday dinner. Meanwhile emigrants everywhere strive to recreate their native foods at least once in a while for a taste of home.

At the same time place is evoked by the smell, taste and mere idea of certain foods. An American abroad is comforted by the aroma of charred hamburger. Corn tortillas warming on a grill evoke much of Latin America. Succulent lamb charring on a spit conjures up the Middle East. The pungent aromas of garam masala spices anticipate an Indian feast.

And this holds too at the regional level. Southern fried chicken, Maine lobster rolls, French Canadian pea soup, Texas barbecue immediately call to mind powerful place-based memories. We may not be what we eat, but we can imagine ourselves and our lived space through our foods.

So how exactly does place influence food—its taste, availability and meaning and food practices—the ways it is produced, distributed and consumed? In turn, how does food actively create place by shaping culture, economy and society? And how are these patterns being transformed today by the ubiquitous forces of globalization? Is the new normal the homogenization of food practices and concomitant eradication of place distinctiveness?

These are the themes explored by geography professors Pascale Joassart-Marcelli and Fernando J. Bosco in Food and Place: A Critical Exploration, a collection of research-based studies investigating the spatial shaping of food practices—including production, distribution, preparation, and consumption—and how these contribute at the same time to the production of place.

The goal is to show that place remains extremely important in understanding our relationship to food. Although globalization has transformed the significance of place, it has often heightened specificities and accelerated uneven development while promoting new fusions and syncretism. These processes require critical theoretical perspectives on the emerging fields of global food systems and food security which are provided here primarily by cultural geographers, but also by scholars from anthropology, sociology, gender studies and urban and community studies.

As such, Food and Place is essentially a textbook “reader” of diverse essays for senior undergraduate students in geography and other social sciences and interdisciplinary programs dealing with the relatively new area of critical food studies.

But it has far wider relevance to scholars, policy analysts, and practitioners of sustainability and social justice, plus anyone interested in food issues in popular culture by virtue of its timely content, clarity of conceptual elaboration, accessible language, and engaging interactive format. This is not a dry weighty compendium intended to be memorized and regurgitated at exam time. It is provocative and engaging reading offering fresh perspectives on the food challenges encountered in everyday life today.

A brief introduction to food and place in a rapidly globalizing world emphasizes key concepts and critical theories around the cultural, social, economic and political contexts in which foodways, food systems, and food landscapes are embedded.

After this useful primer, the book is divided into three sections of essays identifying key factors responsible for increasingly unequal access to food and use of agrospace and ways to resist and change the dominant corporate and neo-liberal food regime in pursuit of food justice.

Part 1 deals with food regimes as broad patterns of social organization of food production and distribution which have evolved over time and space, drawing attention to the political and economic forces that underlie uneven patterns of food consumption on a world scale.

These macro processes are grounded in case studies, such as the effect of concentrated animal feeding in California’s Imperial Valley within global supply chains contrasted with a radically different example of meat consumption—the Yulin, China, canine culinary festival.

Another research project examines the impact of genetically modified crops on food sovereignty in Argentina, Mexico, and Colombia. An important chapter connects the racialized marginalization of immigrant farm workers in Oregon to the contemporary global food regime and the ongoing displacement of rural livelihoods in Mexico.

The second part of the book focuses on foodscapes as the places where food is grown, produced, prepared, discussed, or researched and thus acquires socially constructed meaning. Unlike the macro political and economic focus of the first section, foodscapes tend to emphasize food consumption and its embeddedness in localized social and cultural relations which tend to be undermined by the dominant corporate capitalist food regime.

“For instance, chicken is no longer a rare treat purchased from a specialty shop or a local farm for a special Sunday roast. Instead, it comes packaged in cellophane from an abstract and decontextualized factory ‘somewhere’ in the Global South.”

Topics considered in this section include the role of food in transforming urban neighborhoods, particularly under gentrification wherein the commoditization of eating for foodies may provoke urban revitalization but at the same time accelerates the displacement and social exclusion of existing residents.

Another chapter takes on the widely accepted obesogenic environment thesis which claims that food landscapes cause obesity, ignoring how food consumption is shaped by race and class relations and other ways that place can influence health, such as through exposure to toxic chemicals.

An important chapter here challenges the widespread assumption that farmers’ markets are a key component of the emergence of alternative sustainable food systems. Instead, the book’s editors, Bosco and Joassart-Marcelli, highlight the ambivalent role played by local food organizations in creating a fair food system. Although they are touted as promoting healthy food consumption and elimination of middlemen, prices tend to be high and residents of low-income communities may be displaced and excluded since farmers’ markets often are predicated on a white habitus and adhere to a neoliberal profit agenda at odds with the social justice goals of locavorism.

The third section of the book, on the body, shifts the focus to the intimate, emotional, and sensory qualities of food and the ways in which food and place are inscribed onto bodies.

“This section emphasizes the ways our food choices and eating practices reflect and influence identities and subjectivities. We show how eating behaviors and attitudes toward food are shaped by spatially defined categories such as gender, class, race, and ethnicity.”

Chapters focus on the dynamic relationships between food, ethnicity and identify; diversity considerations in rethinking nutrition and obesity; the biopolitics of child surveillance and control in the National School Lunch Program; home cooking and changing gender relations in the kitchen; celebrity chefs and their emerging role in reshaping attitude toward food.

Each chapter in the book is organized around one or more clearly defined theoretical concepts, illustrated by textboxes or case studies and further operationalized through several key terms defined in a glossary at the end of the book. Learning objectives are spelled out at the beginning of each chapter and additional resources are provided at the end.

Most engaging are the “food for thought” segments between chapters, which allow the reader to “digest” the material through reflection, activities, and recipes intended to get the reader out in the community as a participant-observer or in the kitchen as a critically aware cook.

For example, the food for thought segment “Where does your breakfast come from?” asks you to make a list of all the ingredients in your breakfast today and identify their geographic provenance and the actors that have been involved in making these available to you. An excellent healthy recipe for granola follows.

Another food for thought segment on animals as food includes an authentic Chinese recipe for Clay-Pot Dog Meat Stew, with a caveat: “We certainly do not encourage you to make this dish with dog meat; it is meant to provoke critical thinking about the ethics of eating animals.”

In sum, Food and Place: A Critical Exploration is not only a fascinating college textbook, which, in this case, is not an oxymoron. But also it will resonate with the general public interested in provocative contemporary questions such as: Why don’t we eat dogs? Does your neighborhood make you fat? Do community gardens encourage urban gentrification? Can cheese save a local economy? Is the kitchen an oppressive place?

In the process of answering such questions, the authors excavate current fads, fashions, acronyms, and buzzwords to expose the fallacy of assuming that so-called sustainable alternatives to the contemporary dominant food regime will necessarily lead to more equitable access to healthier food. Unless these alternatives promote fundamental transformation of the structural relations underpinning the dominant neoliberal food regime, the outcomes will be purely cosmetic and of benefit to an elite few.