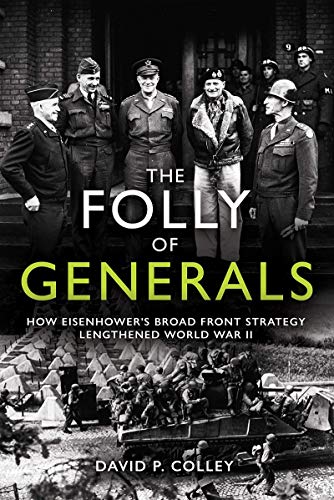 “[Colley’s] . . . history joins a long list of books that have suggested that a more concentrated attack against Germany’s Siegfried Line in the late summer of 1944 could have shortened the war.”

The great theorist of war Karl von Clausewitz wrote that everything in war is simple, but even the simplest things are difficult. War plans rarely survive contact with the enemy often due to what Clausewitz called “friction.” The difficulties in war multiply, he explained, which “no man can imagine . . . who has not seen war.”

David Colley’s new book The Folly of Generals is a critique of the Allies’ “broad front strategy” employed in the European theater of operations after the Allied breakout from the Normandy beachhead and bocage. Colley, a freelance writer from Easton, Pennsylvania, has written several books about World War II, and this latest history joins a long list of books that have suggested that a more concentrated attack against Germany’s Siegfried Line in the late summer of 1944 could have shortened the war.

The D-Day invasion on June 6, 1944, succeeded in establishing a fragile beachhead, which was gradually expanded into the interior where Allied troops became stalled by the bocage—fields bounded by thick hedgerows that served as natural and strong defensive positions for the Germans.

After slugging it out with the enemy for more than a month in the hedgerows, the Allies launched Operation Cobra—a massive air bombardment that enabled them to advance more quickly across France with the goal of reaching and piercing the German West Wall known as the Siegfried Line.

Colley’s book, like previous books on this subject, mostly blames the Allied Supreme Commander General Dwight D. Eisenhower for pursuing the broad front strategy, but this ignores the fact that overall wartime strategy was determined not by Eisenhower alone, but with the overall direction of the Combined Chiefs of Staff, and ultimately by President Roosevelt and Prime Minister Churchill.

And as Colley notes, Eisenhower at one point chose a concentrated attack—Operation Market Garden (launched September 17, 1944), led by British General Bernard Montgomery, which tried but failed to seize a bridge over the Rhine River at Arnhem in the Netherlands. This was the most direct route to Berlin. Colley argues, however, that there were several better opportunities to concentrate Allied forces to pierce the Siegfried Line and end the war in 1944.

One possibility was 200 miles south at Wallendorf on the Schnee Eifel, where troops of the American V Corps had entered German territory in early September 1944. Colley suggests that if V Corps had been reinforced with supplies and more troops, it could have broken through the Siegfried Line and advanced to the Rhine. German forces there were spread thin. “The way was paved,” Colley writes, “for a deep penetration into the enemy’s heartland . . . to roll up the enemy line facing American forces farther north in the Eifel, and maybe even an advance to the Rhine.”

Colley acknowledges, however, that Eisenhower may not have been aware of the potential for a breakthrough at Wallendorf, and in any event Market Garden was the priority—if it succeeded the shortest route to Berlin would be opened. Colley rightly notes that to Eisenhower and Supreme Headquarters, Wallendorf and the Schnee Eifel were “sideshows” to the main event at Arnhem.

Colley next suggests that Allied forces could have concentrated their efforts on Aachen and the Stolberg Corridor, where the U.S. VII Corps under the command of General Lawton Collins could have attacked through the Aachen Gap to the Ruhr near the city of Duren across the Roer River. Instead, VII Corps attacked near and in the Hurtgen Forest and suffered significant casualties.

A third possibility suggested by Colley is the Belfort Gap, located between the Vosges Mountains in France and the Jura Mountains in Switzerland. Here, U.S. General Lucian Truscott sought to wield his VI Corps to destroy the German Army at Belfort, France, and cross into Germany. General Alexander Patch described the Belfort Gap as the “Gateway to Germany.” “Capture of the Belfort Gap,” writes Colley, “would have provided an avenue east to the Rhine and the Alsace Plain and the city of Strasbourg . . . [and] would also have provided a springboard to cross the Rhine.”

Later in November 1944, General Jacob Devers’ 6th Army Group planned to cross the Rhine north of Strasbourg. Eisenhower shot down this plan. Colley suggests that Eisenhower’s personal dislike of Devers played a role in this decision. Eisenhower, Colley suggests, also did not want Devers to steal Generals Bradley and Patton’s thunder. Devers believed that had he been permitted to cross the Rhine in November 1944, there would have been no Battle of the Bulge—which was the costliest battle for Americans in the Second World War.

Colley also has chapters on the American failures to close the Falaise Gap in July 1944, to swiftly breakout of the Anzio beachhead in Italy, to cutoff the German and Italian escape from Sicily through the Strait of Messina, and to bypass Paris in August 1944 to more quickly approach the Siegfried Line before it could be reinforced. The criticisms here are all valid, but historians should always be mindful of Clausewitz’s wisdom when passing judgment on the mistakes that occur during war.

The author concludes by accusing Eisenhower of lacking “insight, flexibility, and boldness of a superior commander.” He is not the first historian to do this. Throughout the book, Colley uses postwar comments by German generals to support his arguments.  What Colley seems unable to acknowledge, however, is that all of the options other than Market Garden had their own potential pitfalls and would have been subject to the same “friction” that affects all war plans and combat.

Market Garden was bold and could have succeeded—if it did, Eisenhower would be hailed as a master strategist. Its failure changed things on the ground and limited possibilities for yet another concentrated effort. The broad front strategy continued—approved by the Combined Chiefs of staff and their political superiors. Hitler’s regime was defeated by the pincer-like attacks by Soviet forces in the east and by Allied forces in the west along the broad front. Historical hindsight is valuable, but it should always be done with a generous dose of humility.