Following Ezra: What One Father Learned About Gumby, Otters, Autism, and Love From His Extraordi nary Son 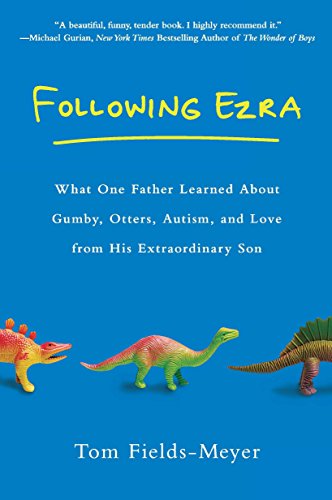 Following Ezra is a touching memoir that chronicles a father’s experience raising his autistic son. Tom Fields-Meyer presents scenes of struggles and triumphs ranging from Ezra’s toddler years to his bar mitzvah at 13.

The first chapter tells of the parents’ realization that their child has autism. Many books with similar themes have their own variation on this moment. Some occur at or before birth. In this case it is Ezra’s preschool teacher who finally voices what the author and his wife have already suspected: that Ezra is different. The teacher describes him as spacey, inflexible, and autonomous. He doesn’t connect with peers and is often unresponsive. For Mr. Fields-Meyer, hearing it from someone else makes it sink in that Ezra’s behavior “isn’t just odd; it’s problematic.”

Mr. Fields-Meyer brings a journalistic sensibility to the writing that makes the scenes fresh and vivid. The tension is at times palpable. With its narrative style, this book is not hindered by a surplus of technical or medical jargon. It is deeply personal.

The central theme of the book is disclosed in the title itself. Mr. Fields-Meyer comes to the realization early on that Ezra’s life is not going to start after he is “cured;” his life (as well as the lives of everyone in the family) is now. Rather than trying to force Ezra into conformity, he decides to follow Ezra’s lead as he makes his own way.

At first though, the author tackles the Ezra problem in a consumer-oriented fashion: Find the best experts, get their advice, and follow it until the problem is fixed. There is irony here, intended or not, in methodically checking items off an autism therapy plan.

Surprisingly, the book is filled with laugh-out-loud moments—the kind that are only funny when looking back upon them. Most arise because of Ezra’s penchant for being brutally honest: asking a neighbor how they got so fat or reminding an elderly person of their impending mortality.

Ezra is often overcome by irrational fears: haircuts, toy dinosaurs, drinking fountains. He finds comfort in things that have permanence. One of his obsessions is with animated movies. He searches out and memorizes minutiae about films such as release dates and running times.

Having this storehouse of knowledge is a way for Ezra to exert control over his universe. People and social situations can be complex and unpredictable. For Ezra, knowing that Toy Story will always be 80 minutes long or that the numbers on his grandmother’s house don’t change is a source of comfort for him.

Mr. Fields-Meyer reveals as much about himself as he does Ezra. He is a devoted family man very committed to his faith and to the Jewish community that he is part of. What is noticeably absent from this memoir are his other two sons. They rate brief mentions but there are not many scenes involving them. Perhaps they didn’t want to be featured in the book and Mr. Fields-Meyer is honoring that request. One gains an appreciation of the unique father-son bond, but the book could have been richer by including more scenes in which Ezra’s mother and brothers were present.

Events are presented in random order. This wouldn’t be jarring if the author hadn’t established a linear chronology in the first few chapters. It does serve the purpose of subtly reinforcing a feeling of upheaval.