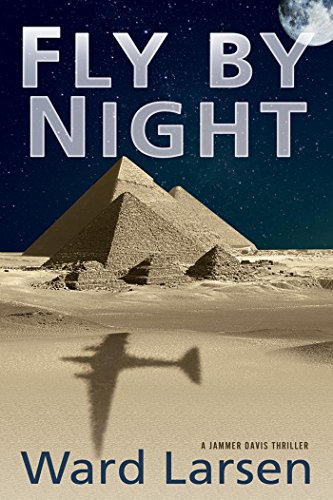 “Fly By Night is fast-paced and engaging. Thoroughly enjoyable.”

An unmanned American drone disappears somewhere in Africa, and then shortly afterward a DC-3 operated by a fly-by-night company in the Sudan crashes in the waters of the Red Sea. Jammer Davis, an experienced pilot and accident investigator, reluctantly accepts the assignment to investigate.

His mission is to find out for the CIA what happened to the unmanned aircraft, in the guise of merely investigating the DC-3 crash. Jammer knows his way around accident investigations, but he is also an experienced soldier. He is not a typical bureaucrat in the National Transportation Safety Board.

At an airport outside of Khartoum he finds an odd assortment of pilots who are flying cargo for FBN (fly by night) Aviation. A Muslim cleric (or at least someone who is posing as one) has a shadowy connection with FBN and seems to be plotting a new use for the captured drone. It is up to Jammer Davis to figure it all out—and to prevent further disaster.

Along the way he makes the acquaintance of a striking Italian doctor who has conveniently decided to end her marriage. The sparks fly.

Ward Larsen’s Fly By Night is an enjoyable yarn. And Mr. Larsen knows what he is talking about. He was an Air Force fighter pilot and an aircraft accident investigator. These days he combines a vibrant writing career with his day job as an airline pilot. So the details that he paints are the real thing, often believable and always fun.

For a private pilot, Jammer Davis is the sort of pilot to dream about. He can start the notoriously difficult engines of a DC-3 without a checklist; he easily dispatches armed Sudanese soldiers; and he flies at unusual attitudes—both as a pilot and in his personal life.

Fly By Night is a quick and easy read. There is nothing in here about the Sudanese landscape that demonstrates a particularly detailed knowledge of the Sudan, and there is not much about the complicated politics of the Middle East to offer the reader any new insights. But perhaps because of its simplicity, Fly By Night is fast-paced and engaging. Thoroughly enjoyable.

David E. Spiro is Adjunct Associate Professor of International Political Economy at Columbia University and the University of Pennsylvania.. A management consultant with The Strategy Practice, he is also a Visiting Scholar at the International Studies Association. He is the author of The Hidden Hand of Hegemony (Cornell University Press).