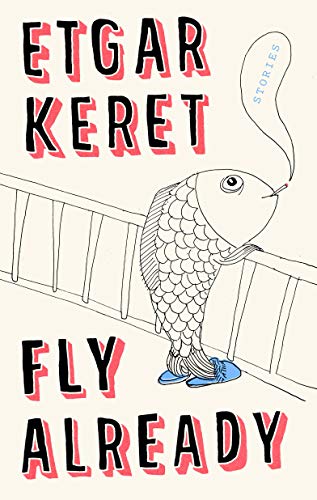 “This balance, between nihilism and delight, is the great power of Fly Already. In this sense, it’s a book not just about living in Israel, but about living in the developed world at this terrifying moment in history . . .”

Strange fiction may well be the artistic mode of the 21st century. Realism, when it rears its Caliban head, is a thing to throw stones at. If we’ve arrived in a moment of deep literary strangeness, Etgar Keret needs credit for helping guide us across the threshold of paradox and cheerful, low-key madness.

What he writes isn’t magic realism. Magic realism is a literary language of the colonized, and of people engaged in resistance. Strange realism, as it were, is the mode of those deeply uncomfortable with structures of power that privilege them without providing significant delight. It’s a paradox, an ongoing state of discomfort and self-examination that demands that the world fracture to properly reflect itself.

Keret is an Israeli writer who works in Hebrew. (The stories in Fly Already are rendered by five different translators.) His narrative world encompasses the deep ambivalence of a country struggling to exist following a history of genocide, which nonetheless engages in an ongoing colonial process against another, overlapping population. Israel has no fully consensual reality; to render Israel realistically, one must give absurdity free rein.

In this spirit, the second half of the book is punctuated by an untitled email exchange under the subject heading “‘Glitch at the End of the Galaxy’ query.” Michael Warshavski’s desire to visit an escape room is thwarted by an owner who tartly reminds him, “the escape room will be closed this Thursday because of Holocaust Remembrance Day.”

Warshavski counters that his mother, who will accompany him, is a Holocaust survivor, and needs an escape, not from the Holocaust but from the ongoing trauma of its memorialization. Too bad. The law says businesses shall remain closed. Warshavski grows irate: “the escape room deals with heavenly bodies, and they, to the best of my knowledge, did not deviate from their orbits when six million Jews were sent to their deaths.”

It’s an argument in which both participants claim the moral high ground, both on the basis of familial suffering, and both fall into pits of absurdity. It’s typical of this collection, where the sacred and the profane overlap. Keret’s characters are aware of the social contract, but they aren’t about to be bound by anything they didn’t sign themselves.

The narrator of “One Gram Short” finds himself on an absurd odyssey to impress a girl: “There’s an adorable waitress at the coffee shop next to my house. Benny, who works in the kitchen, told me that she doesn’t have a boyfriend, that her name is Shikma, and that she is a fan of recreational drugs.” If he only had a joint to share with her, love would blossom, but the wars in the Middle East have, for now, interrupted the drug trade.

This is as overtly political as Keret’s fiction gets. His characters live in Israel without being individually engaged in the country’s battles and projects. In “Yad Vashem,” a couple visits Israel’s official Holocaust memorial, where they continue a cold war regarding an already concluded abortion. Eugene, furious, runs into a plexiglass divider and develops an endless nosebleed.

The nosebleed has echoes of Gabriel García Marquez’ “The Trail of Your Blood in the Snow,” but Eugene’s blood refuses to create symbolic connections or severances. In front of the Children’s Memorial, his girlfriend informs him, “I’m not depressed. . . . I’m just not happy being with you.” It’s a blunt, personal loss, created without violence except what clumsiness brings to itself. The only sympathy for Eugene comes across a gulf of failed translation, from confused Japanese tourists.

In between these disorienting yet ordinary tales, surreal interludes reveal impossible longing. In “The Next-to-Last Time I was Shot out of a Cannon,” circus performance is the last resort of the sorrowful: “‘I’ve never been shot out of a cannon,’ I said and took another drag of my cigarette. ‘Sure you have,’ Roman said, ‘when your ex left you, when your son told you he hates you, when your fat cat ran away. Listen, to be a human cannonball, you don’t need to be flexible or fast or strong, just lonely and miserable as hell.’” It’s a nihilistic premise, but the story rises past it to quiet revelation and delight.

This balance, between nihilism and delight, is the great power of Fly Already. In this sense, it’s a book not just about living in Israel, but about living in the developed world at this terrifying moment in history, during which we will refuse to look at history at all. Keret’s stories are complex and moving; often, they are very funny. In reading them, we all clamber and wheel into the escape room at the end of the universe, eager to ignore the horrors around us, if only for a very determined moment.