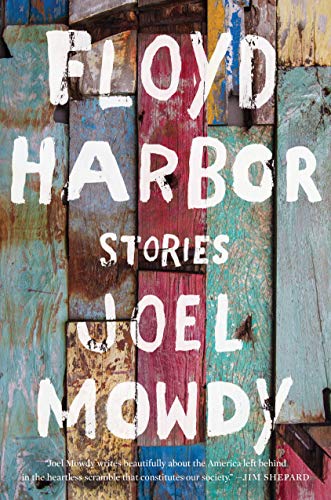 “a promising debut from a graceful and compassionate writer.”

Thoreau’s “lives of quiet desperation” are beyond the reach of the enervated young people who inhabit Floyd Harbor, because even despair requires emotional energy. Joel Mowdy’s debut collection of short stories is set in Mastic Beach, a Long Island town a stone’s throw from the opulent Hamptons, but a social and economic universe apart. Characters and situations recur in the book’s dozen stories, but they are not formally connected except that all share a common theme of poor, white young people—mostly young men—grasping at the straws of adulthood with varying degrees of lack of success.

The characters in the stories share run-down bungalows furnished with cheap dinette sets and electric heaters and have sex beneath thin, worn comforters on futons in a town filled with boarded up shops whose de facto community center is a 7-Eleven. T

he most ambitious among them may drop in and out of the local community college, but, for the most part, they work at little jobs like drug clerk, bowling alley attendant, and landscaping, and occasionally engage in petty crime. One fraud that runs through the book involves switching price tags on a mattress, returning the mattress to a different store where the original, higher price comes up, and pocketing the difference.

While the world depicted in Floyd Harbor is depressed, it’s anything but a depressing read. Mowdy loves his young losers, and his account of the emotional and physical texture of their lives is spot on. The stories are filled with quietly insightful passages that create a plausible world filled with real people.

For example, in “Salty’s,”, the young protagonist undresses his girlfriend: “He could taste his pot and beer breath on her breast, her workaday in the stubble in her armpit.”

“The Luz” is about a disillusioned high school English teacher who once dreamed of better things for his students. Beaten down by years of disappointment, he’s greeted by a former student as he makes his furtive escape from a graduation ceremony and reflects, “Behind the school gate, dressed in those ill-fitting, emergency-only suits, they looked like they were awaiting court appearances. Some of them probably were.”

In “Chubba Chuck,” the stoned, depressed protagonist who has moved to a farm to get over the girl who dumped him remembers: “And when they had reached that point in their relationship where they’d talked about everything, where in their sleep, lumped on each other, they might have dreamed they were connected at the hip, or that they were spoons, or that they were an itch on the other’s back, they developed the habit or recycling old conversations. Just to hear each other’s voice.” This is high quality writing that conveys in simple but affecting language an authentic experience of intimacy.

While stories like “The Luz” and “Chubba Chuck” strike home, others seem like little more than extended anecdotes that simply trail off. That’s the risk of writing vignette-style fiction; you can dispense with plot, but something still has to happen for it to be a story. It will be interesting to see whether Mowdy’s craft can sustain an entire novel, should he choose to challenge himself with that literary form. For now, however, we have Floyd Harbor, a promising debut from a graceful and compassionate writer.