Flowers of Mold & Other Stories 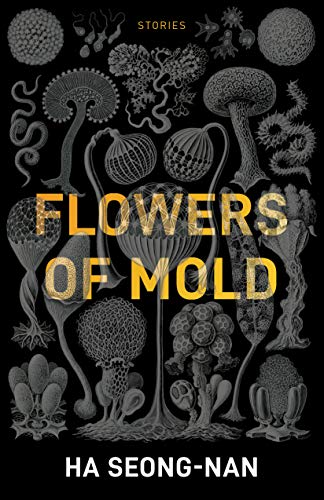 The stories in Ha Seong-Nan’s Flowers of Mold are an acquired taste. Fortunately, taste for them can be developed awfully fast.

Starting with the collection’s title, the image they evoke at first is fuzzy, dark, and unfocused, making of our entrance into the world they present an exercise in ambivalence, so that we look at them in the way we regard things that fail to attract us immediately, things that unsettle us the moment we happen upon them. (Is it really the face of a feral cat I’m seeing in the folds made by that garbage bag in the street? Wait, why am I looking at garbage bags?)

Here she is in “Waxen Wings,” the book’s opening story: “For the first time in your life, you witness the moment life escapes from a living thing. All the visitors leave, but you continue to stand there, even after the concession clerks have gone home. The sun starts to set, and everything quickly grows dark. All the pigeons have flown off except for the one by your feet. Rigor mortis has set in.”

And it’s not just dead pigeons and garbage bags. It is maggots, vomit, insects, caked food on walls, three days’ old, blood, the stench of lifeless flowers, and, yes, mold.

But it is also people. People who love, who desire, who act out of an uncontrollable impulse for connection and do so in the very ways that will ensure they never get it. These actions seem to happen somewhat repetitively in Flowers of Mold, a certain lunacy born of longing and its consequences always on display.

There is also much high-stakes drama here, and it is successful in its goal of disconnecting us from our immediate reality, our hearts racing, disquieted, as if something dystopian had sprung from the pages housing these ten stories and were lurking about, threatening our normalized lives with events happening in muted colors—faded yellows, the blues and greens of neon letters that no longer light up, dark grey cement raining over everything.

It helps that Ha’s prose is clean and the stories well-constructed. Also that translator Janet Hong does a fantastic job of preserving the mood, tone, and elegance of the author’s poetic syntax, and of making sure that meaning is precisely rendered. A very good thing because time, too, is fluid here, yesterday and tomorrow the same thing, all of it ultimately enchanting and brilliant in its own exhausting, at times purposely confusing, way.

Thus any initial impulse to scrunch our nose and turn away from the smell gives way as the images come into focus, the sense of distance disappears, and we are involved, engaged, even interested in the life of some of the loneliest people we will ever hear of, as in these lines from the collection’s title story:

“Bean shells, seesaw, monkey bars, boy, puddles. The man writes down a few words that will help jog his memory. Later, the shells she shucks will become the only clue in identifying her garbage bag from the others. He doesn’t know which unit out of the 90 she lives in. Luckily there’s only one apartment building.”

Two distinct devices appear to help create this trance of interest and investment as we read. One, Ha’s ability to break down a moment until it reveals its urgency, as in this passage, also from the story “Flowers of Mold”:

“The child is catching his breath before swinging from the third bar to the fourth. If he wants to land on dry ground, he has no choice but to go all the way across. His pants are slipping down, and his shirt rides up to reveal a patch of pale skin.”

The second method is her commitment to delivering big enough moments in exchange for our patience with her breaking down of a second, a gesture, a glance, the most fleeting of thoughts, as in this scene from “Onion,” the book’s final story, in which the title refers more to the story’s structure than to anything that happens in it:

“She sees an empty corner seat with a jacket tossed on it. She pushes it aside and sits. She feels something soft and hard under her bottom, like a purse. She closes her eyes. She hears endless whining, intermittent howls from the injection room, and soda cans falling in the vending machine. The younger child, who is coming down the slide, crashes into the older one, who has climbed up the wrong way. ‘Teacher!’ the smaller child screams, bursting into tears.

“She awkwardly gets to her feet, and glimpses something like a reddish lump out of the corner of her eye. What she had been sitting on wasn’t a purse at all, but a newborn baby. Smothered by her rear end, the area around the baby’s eyes and nose has already turned blue. She makes eye contact with a young woman coming back from the pharmacy counter with a prescription in hand. The woman walks in her direction, her body still showing signs of postpartum swelling.”

In this way, what began by repelling us, has brought us to our feet by curtain’s close, clapping and grateful that this complex off-Broadway play has forced us to experience the loveliness of all that rots, and the value of sitting still to watch it die, never for a second able to look away.