The Flowering: The Autobiography of Judy Chicago 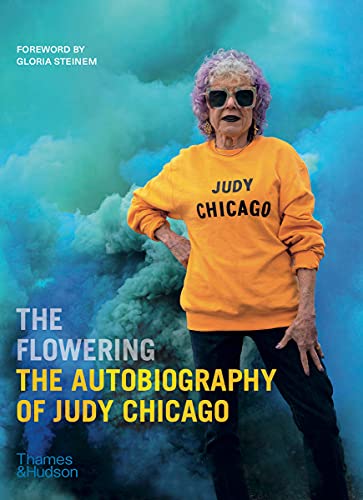 “By describing her own journey, Chicago offers an unglamorous view of the life of an artist who became famous as well as infamous . . .”

The artist who was born Judy Cohen in 1939 and who took “Chicago” as her last name in 1970, made art before The Dinner Party, her monumental multimedia work that first appeared in 1979 and that has a permanent home in the Brooklyn Museum.

Chicago also made art after The Dinner Party, including Birth Project and Holocaust Project. Still, it seems likely that art historians and her many admirers and fans will remember her for The Dinner Party, a kind of feminist version of The Last Supper.

If The Flowering is any indication, it's also how the artist herself would like to be remembered, treasured, honored. The opening of The Dinner Party, she writes, was “one of the most glorious evenings of my life.” More than half of Chicago's new 408-page autobiography focuses on The Dinner Party: its origins, genesis, evolution, influences, reception, impacts, reviews, and more.

In the foreword to this book, Gloria Steinem calls Chicago "a miracle."  It might be more accurate to call her a phenomenon. An original artist, she has also been a shameless self-promoter, a vocal feminist, a teacher, and the author of 11 books, which have paralleled her many stunning installations, exhibits, and shows that have rocked what she sometimes calls "the art system" that she has lambasted as an integral part of the patriarchy.

Near the end of The Flowering, Chicago says that she began to write the book in early 2020. It was published, first in England in 2021 and soon afterward in the US. One year to write one's autobiography does not seem like adequate time to do justice to one’s life.

Indeed, The Flowering feels hurried, especially the last 200 or so pages in which the author describes her travels to Canada, Europe, Japan, and beyond. The pace can be dizzying. In her defense one might say that since this is her third autobiography, she has not had to conduct much research.

Readers will probably find that the parts of the book that work best are about the 1970s, the decade when The Dinner Party was busy being born and when the feminism of the era shaped Chicago's art and personality and when she in turn helped to shape feminist expression.

The Flowering is nothing if not surprising, sometimes in disconcerting ways. Chicago often explains that she can't remember why she did something, and that her life often didn't turn out as she hoped and expected it would. For all her worldliness, she exhibits a surprising degree of naiveté.

Indeed, she became an artist without realizing that there was a long history of women artists. As she explains in chapter five, “Learning from the Past,” she went on a reading binge, studied history, and came to appreciate the rich body of work by and about women that was often ignored and buried by men who should have known better.

Near the end of the book, she explains that other people seem to see her in ways that she doesn't see herself, and that her view of the world doesn't align with the world as it really is.

That's in part her strength as an artist. Indeed, Chicago has persuaded the world to come around to her perspective and view sex, gender, and power without blinders. She can occasionally be brilliant as when she observes that “what is not imagined is not real.”

Readers might be surprised to discover in these pages that after years of working with women, Chicago fell in love with a man, married the man, bought a house with the man, worked side by side with him, and in her account has lived happily ever after.

When her husband to be, Donald Woodman, decided to collaborate with her on one of her projects, she writes that she did not and does “not really know what motivated” him. A strange comment given the fact that they worked together and lived togther as a married couple.

Near the end of this book, Chicago offers a length quotation from a review of her work that appeared in The New York Times in 2002 and that, she says, filled her with joy.

The critic Roberta Smith wrote that The Dinner Party is "Moving, illuminating, irritating, flawed, powerful" and that it's also "a highly informative, entertaining teaching device meant to raise consciousness in a single bound."

It might be appropriate to borrow some of Smith's language and say that Chicago's autobiography is illuminating, irritating, flawed, informative, and a valuable teaching device for young artists, both men and women.

By describing her own journey, Chicago offers an unglamorous view of the life of an artist who became famous as well as infamous and who often didn't have enough money to live, but who always went back to her study to make more work. In that sense, Steinem is right. Judy Chicago is a miracle.