On the Floor: A Novel 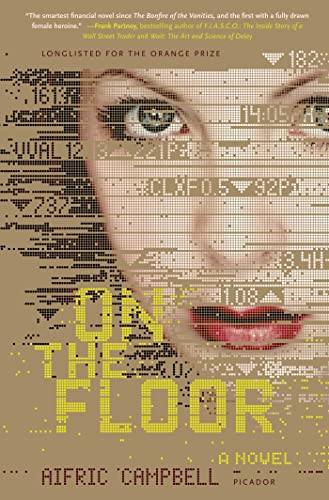 On the Floor is a confident, engaging, and incredibly readable debut novel from the author Aifric Campbell.

Recalling Bonfire of the Vanities and Wall Street, this is a work that throws us lock, stock, and barrel into the world of high finance. Banking is a world that Ms. Campbell shows to be amoral, macho, and often repulsive, and yet at the same time seductive, compulsive, and energetic (much like her novel).

Ms. Campbell’s stock is very high right now. She’s a graduate of the University of East Anglia’s renowned creative writing course—other notable alumni include Kazuo Ishiguro, Ian McEwan, Anne Enright, and James Scudamore. And On the Floor has already been longlisted for the Orange Prize for Fiction.

The novel centers on its excellently constructed protagonist, Geri Molloy. Geri is a “skirt amongst men” on the trading floor at Steiner’s. She’s become a roaring success off the back of the “Big Fucking Ticket”—landing the bank’s biggest ever client, the cash cow Felix Mann—and has become “a legend in my own lifetime.”

Only, at the start of the novel, Geri is in meltdown. She’s drinking too much, allowing her innate talents—she has more than just a head for numbers, she’s a verifiable mathematical genius—to wane. She’s been dumped by her boyfriend, Stephen (in Venice, the most romantic city in the world).

Literally, she is on the floor.

“I turn my head sideways and this sudden movement unleashes a shooting pain in my right temple which I recognize as the cumulative effects of dehydration, jet lag, insomnia, malnutrition and the contents of the empty bottle on the floor beside me.”

Geri’s shown to be at war with herself. She is obsessed with those numbers: “how the numbers can cloud and swim in my line of vision, how they threaten to obscure everything, their horror seduction pursuing me through the night hours. The curve of a three, the suggestion of a seven, the swimming fluidity of an eight, the compulsion to connect, their screaming demands, the drain on my attention. The slow reveal of a sequence, the fear that I may somehow lose myself in the numbers, that they may one day suck me dry.”

And yet her upbringing has forced her to hide her natural talent under a bushel. She is convinced girls aren’t supposed to be mathematical geniuses or to rumble on the trading floor. Girls are supposed to “do the special things that girls go” such as singing, dancing, etc.

The war imagery fits neatly with the backdrop: Geri’s story plays out across the backdrop of the first Gulf War in 1991, Stormin’ Norman Schwarzkopf and all that.

Indeed war becomes a clear metaphor running throughout the text. From the moment Ms. Campbell thrusts us out of our readerly comfort zone and onto that masculine, muscular trading floor, we’re hooked, sucker-punched, left reeling.

“The lift doors glide apart, I step out onto 15 and already I can feel the market pulse. On busy days you can hear the roar of the trading floor right here, a blurred wall of sound that hits you like a stun gun.” “There is,” she says, “no place in the world quite like this.” It is “the gateway to heaven and hell.”

Ms. Campbell evokes the floor viscerally. She captures the excitement of it, the high-octane pace of it: you feel the “change in tempo, like the rumble of approaching thunder.” We are on the floor, with Geri, with ‘the boys,’ faces fixed as though they “were landing on the beaches. You need to kiss the cross around your neck and dodge the bullets, pick your way gingerly through the index minefield before a stock tick blows you to bits. Tonight, when darkness falls, the paramedics from Financial Control will sneak out to pick over the remains: whose trading book is hemorrhaging, who’s already dead and who has managed to limp away intact.”

The “big fish” Felix, is described thus: “Felix is ready to pounce on anything that moves. His expert claws rip meat from a whole range of financial instruments with an extraordinary ability to extract value from chaos. He stalks the battlefield carnage, picking at the bruised flesh of failed mergers and acquisitions, resuscitating dying deals. . . . Felix moves markets like Jesus walks on water.”

We’re on the floor with men who are given nicknames like soldiers: “The Grope” or “Bud Light.” With traders who hold their finger “in the air, making up prices like you were on a fruit and veg stall.” The floor has a language all of its own, and Campbell reflects this beautifully, even down to the chapter titles (such as Scorched Earth).

On the floor, the atmosphere is “part locker room.” The bullying recalls Lord of the Flies. The casualties recall "The Charge of the Light Brigade." It is the law of the playground that rules here: “They have never really left the playground, and the thrill of inflicting humiliation is just as exciting as it was all those years ago . . .”

There is a huge amount of arrogance and assumption on the floor: “We know we are overpaid. But that’s what we cost, it’s only the going rate and anyway there is no such thing as value for money. In one year you can make more than your dad made in twenty. The richest 5 percent of the population owns 35 percent of the wealth in this country. The poorest 5 owns nothing. But ‘enough’ is a dirty word around here, for how could you ever have enough when there is always someone else who has more.”

Greed is good, as Gordon Gecko taught us.

On the floor, you’re either in or out. Workers are classified as either producers or non-producers. You’re a macho man, a master of the universe—or you’re nothing.

One of the major reasons Geri appears to be at war with herself is the fact she is trying desperately to hang on in there in this man’s world in which aphorisms like this hold true: “You have to have a nice speaking voice to work in Corporate Finance. You have to be able to hold your drink to work on the trading floor.”

She has to roll with the punches. Shrug off the dismissive attitudes of the men she works with. Her major deal with Felix is put down to “the natural advantage of pussy. No offence, Geri, but a bit of skirt will get you there every time.”

Geri and her best friend Zanna compose a Rule Book for Wannabe Female Bankers (subtitle: How to Get On Without Getting Fucked) which includes such gems as, number three: “Always remember that two women standing together on a trading floor can only be gossiping; therefore treat all female colleagues with total contempt.” And number four: “Learn how to drink copiously. Know the point at which you are likely to keel over or shag someone you shouldn’t.”

Geri has smashed through the glass ceiling and yet still feels hugely unfulfilled. “I lie back in the chair and watch the tickertape roll left-to-right across the opposite wall, last night’s New York close creating the illusion of momentum in my life. But wasn’t that exactly what seduced me so early on? Not the money, but the possibility that life could in fact be as random as a stock chart, that in the next second you could be ricocheted from a trough to a peak and be utterly transformed?”

And though she does become utterly transformed, it is not in the way she hoped. She suffers a breakdown: “I’m thinking how all stars die, just in lots of different ways. The biggest ones die soonest and in the most spectacular fashion. A red super giant that explodes into a supernova and for the brightest of moments shines brighter than all the other stars in the galaxy put together. But collapse is inevitable, it all ends in a black hole so dense that not even light can escape. Burnout is final. That’s how it goes.”

And yet, despite the terrible sequence of events which befall Geri throughout the text—which I won’t spoil—she does attain some self-knowledge and at least a degree of peace with herself.

She comes to realize that she has been “everyone’s pigeon seeing as I have made a career out of doing exactly what I’m told by all the men in my life. Even when Stephen dumped me in Venice I rolled over in submission instead of throwing things at him.”

She acknowledges that her “big fish” Felix “owns me body and soul.” (Indeed, as an aside, the relationship between Geri and Felix reads a lot like the Lecter/Starling relationship in Silence of the Lambs: “I am a favorite pet, a beacon of entertainment in his outperforming day, an antidote to some bone-crushing monotony, the taste other people leave in his mouth, a dry and bitter acidity, an undisguised contempt.”)

This was a fascinating read—sometimes terrifying, often witty, always engagingly written. Judging from this debut, you can bank on Ms. Campbell to produce wonderful results in the future.