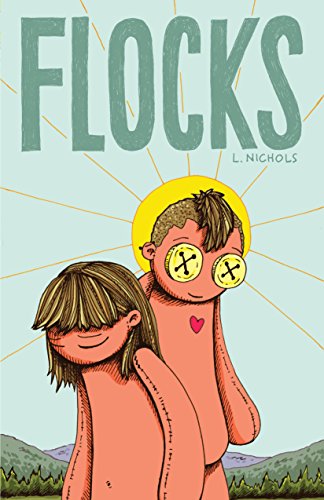 L. Nichols’ graphic memoir opens with a compelling visual contrast: the blunt, intimately detailed faces of the congregation, and Nichols’ own presentation as a button-eyed, undressed rag doll moving unrecognized among them. “Her” head drags progressively lower as family and churchgoers pour out casual homophobia. It occasionally lifts toward possibilities of acceptance: a grateful elder with whom L. volunteers, a crushed-on camp counsellor, the divine in the moment before baptism. Each devastation drives “her” head lower. Even blank expressions become anguish as redemption fails.

L. was assigned female at birth and lived his childhood and adolescence as a miserable and disoriented “girl” in a Louisiana Baptist community. Yet despite his terror of being discovered (images of the doll cowering before the letters Q-U-E-E-R moving toward her with arrows), he revels in faith. The natural world and the presence of animals comfort him in the midst of internalized homo- and transphobia, in the face of his parents’ divorce.

The parents’ relationship and breakdown lurk in the story’s background, never quite breaking through. Devoted readers of Alison Bechdel’s Fun Home will push at the family’s minimal pages. What lies behind those few scenes. What truth does the family conceal? Nichols leaves that door barely ajar and rushes past to his own story.

These early chapters are the most compelling in the book. In L.’s adolescence, animals and beloved congregants both “flock” around him. As much as he belongs to a church that reviles his identity, his faith and his faith community support and protect him. In his reminiscences and self-sketches, L. reveals an adolescent faith as fervent and intimate as the one in Craig Thompson’s Blankets. Nichols struggles against his parents’ and community’s expectations: to be feminine, to be submissive. Only by abandoning those flocks for new ones (gifted-child education, boarding school, university, queer communities) can Nichols become himself, but the loss of the early flocks is powerful.

Though his trans-ness isn’t fully articulated until late in the book, child-Nichols asserts, “I have always known who I wanted to be.” This is the strength of graphic memoir, that rag-doll L. can envision himself as a mountain man in the woods or multiply-pierced hipster without actually having to put that “who” into words.

For years, that “who” wears a butch lesbian face: faux-hawked and cheerful, but never quite matching the original vision. “Who I wanted to be” isn’t an easy identity to articulate. A first short, spiky hair cut in college “feels more right,” but the cuteness of a “baby butch” look drops the rag-doll face back to silent misery.

Happy, “out” queer life seems like L.’s shining future. The reader leans toward it as much as L. does. Yet it’s a goal he reaches without satisfaction. That he can be out, yet crumple into self-destruction creates profound uneasiness. How can a coming-out memoir not be leading to ecstatic self-acceptance? Nichols appears to wonder the same thing. His doll-self looks more and more like his vision of himself, but it remains disorientingly wrong.

The disparity is invisible. The doll-self is sexless, made of stuffed limbs without genitals. This is a potentially powerful metaphor. When he finally tells his fiancée that he wants to transition, he reminds her, “I’ll still be me! I’ll just look a little different.” Truly, the difference is small, perhaps because his essential self has always been present, only changing hair style and facial expression.

In spite of its powerful visuals and emotional highs, Flocks is uneven. Nichols’ childhood and adolescence are given far more detail than the later, more transformative parts of his life. Narratively, his transition and trans-ness appear to be an afterthought rather than a goal. The struggle of memoir is balancing the demands of truth and the demands of story. Nichols leans toward truth, sometimes leaving the book off balance.

Flocks has enormous value, and its authenticity resonates. Its longevity might be improved by expansion. Nichols’ adult life deserves the intimacy and detail of his childhood. His return to faith has enormous emotional potential that’s only sketched out. As a memoir of trans childhood and self-acceptance, Flocks is a complete book, but as a lasting work of art, it feels unfinished, still waiting for the force of an ending.