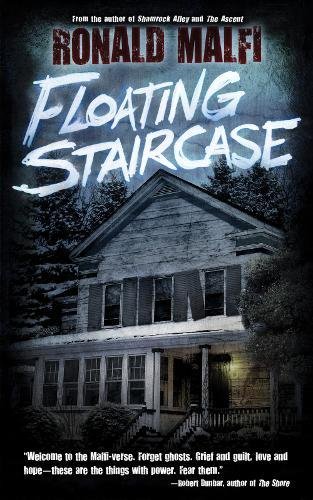 “Floating Staircase deserves to stand alongside a Stephen King or a Dean Koontz—at their best. . . . [it is] a mature horror yarn, but, deep down, it is also an exploration of obsessions, and in particular the obsession it takes to be a writer.”

“Honest writing, much like honest people, comes without wanting anything in return. I found myself on an exploration of characters—characters that begot story; story that begot emotion—traversing through Edenic pastures and Elysian fields where dead boys frolicked in barefooted bliss on the dew-shouldered plains, and terminal skies reflected the roiling slate seas instead of the other way around.”

So says Travis Glasgow, the protagonist of Floating Staircase, Ronald Malfi’s 10th novel. And above all else, this novel is authentically honest writing. The characters are fully fleshed-out, the dialogue is realistic, and the plot, though speculative in nature, is psychologically plausible. And it’s good, too, the kind of work that gives horror a good name.

Above all else, Mr. Malfi is a skillful storyteller; his prose doesn’t get in the way of his storytelling, his ability to keep the reader hooked from one page to the next. And he doesn’t do so by resorting to mindless gore-fest tactics as some other mainstream horror writers do. He writes. That’s what he does. That this is a supernatural tale is almost a biproduct. In this respect, Floating Staircase deserves to stand alongside a Stephen King or a Dean Koontz—at their best.

Floating Staircase is a mature horror yarn, but, deep down, it is also an exploration of obsessions, and in particular the obsession it takes to be a writer. Travis Glasgow is a writer himself, and the story flows from his character, his flaws, his unique personality traits. The trigger for the narrative is Travis’s move back across the Atlantic from North London to Maryland following the success of his latest novel. The move allows him to renew his relationship with his elder brother, Adam, who also lives in Westlake, and also offers him the opportunity to finally come to terms with the loss of his other brother, Kyle, who drowned when he was just 13.

It soon becomes clear that Kyle’s death has haunted Travis’s every move, has followed him across oceans, across continents, even. The death, and the fact that Travis blames himself for it informs, either consciously or unconsciously, his every act, his every relationship. It’s the darkness that stops him from wanting to become a parent with his wife, Jodie, and it’s the one strand of narrative—a drowned boy—which all of his bestselling books have in common.

The thrills and chills in Floating Staircase are slow to come to the boil, but Mr. Malfi skillfully simmers the text with tension throughout. Early on the two brothers drink to “new beginnings” and for a while, it appears that the Glasgows new surroundings may have finally allowed him to bury the past, but soon, a parallel tragedy in Westlake anchors Travis back into his solipsistic guilt and obsessions. At a party to welcome them to the town, a well-meaning neighbor lets slip some of the details:

“We’re glad you and Jodie moved in. The Dentmans were a peculiar family, as I’m sure you’ve heard. Not to speak ill of those poor people and what happened to them, of course.” And later, explaining further: “The tragedy. What happened to the boy.”

As a writer, these are the only details Travis needs to feed on. These simple, stark facts start to mushroom in his dark mind. “I know what it’s like to sit awake at night thinking the thoughts of a haunted man.” And, “It is fair to say both those boys died that night. I will; I will say it. I am a testament to that. The walking dead.”

He starts to write the story of what happened at the house, based on half-truths, gossip, and snippets from the newspaper. After a while, it starts to resemble Room, by Emma Donohue: “The story I was laying out in my notebooks depicted a troubled young boy held captive in a basement dungeon by his mentally disturbed mother and an uncle who found sick pleasure in physically hurting the child.”

And the more he writes, the more things start to go bump in the night, the more he sees things as though he is inside one of his dark fiction stories: “Beyond the trees, the moon was a luminescent skull behind black wisps of clouds.” And: “My heart fluttering in my chest, the tightening grip of panic rising up through the trunk of my body, it took several drawn-out seconds to remember where I was.” And, “There was someone else in the room with us. The realization dawned on me not as lucid thought but in the rising of the hairs on the nape of my neck as I sat up. It was a purely instinctual awareness, tethered to some primal foreknowledge, and I had no rational explanation for feeling it.”

And: “The thing about the lake is it plays with the sound, twists everything like a riddle, and bends it out of proportion. You think you hear something off to the left, but it’s really a quarter of a mile out on the other side of the lake past the pines.”

At times, we question whether the ghost story, such as it is, plays out in Travis’s head. As it is, he recognizes that he is “standing on the line between fiction and reality.” But his obsession to find the honest truth drives him on regardless, despite the fact Jodie moves out, because “. . . sometimes when you start out following something, you end up chasing it.” Indeed, Travis’s mental disintegration begins to shape him bodily: “My face was pallid and sunken at the cheeks, where bristling black hairs like spider’s legs corkscrewed out from the flesh. Purplish crescents hung beneath my eyes, and my eyes themselves appeared bloodshot and shellacked.”

The intertextuality here, the way Mr. Malfi writes about a writer who starts to write his own version of Floating Staircase, is very interesting. Stephen King’s best work features writers as protagonists (The Shining and Misery are just two examples), and it’s clear that it’s in the nature of an author’s job to be an obsessive. But the length of this text invites an obsessiveness on the part of the reader as well. Readers like to be given challenges. There is something comforting about being consumed by a book, as much as you consume the book. It implies something of the epic, neverending stories of our youth. And there is a yearning in horror fiction in particular to return to a childish way of seeing things. Speculating on the unknowns that might exist within the margins of the black and white world. It’s escapist sure, but when done well, like Mr. Malfi’s work is, then it works perfectly.

Some lengthy books betray self-indulgence on the part of their authors. Although Floating Staircase weighs in at 464 pages, it is definitely not self-indulgence. This is a meaty book in which to luxuriate. A little self-indulgence of my own here: My Nana used to call all such thick books “tramscotchers.” This is a particular phrase to the North West of England, and it referrs to the thick muffling devices that are used to slow down the trams in the towns. Floating Staircase is a tramscotcher of a book, but not because it is so thick, rather because it stops traffic. Here is a novel that truly deserves to cross genre boundaries and be valued for what it is: an excellent, highly addictive read.

To conclude, a quick note on the staircase itself, which is perhaps the other most intriguing aspect of the novel. The image of the floating staircase itself is a memorable one. It recalls the Dutch artist M. C. Escher, whose most recognizable, striking works are representations and ruminations on the nature of infinity—in particular his floating, interlinked, impossible staircases. As an image that reverberates throughout the text, this is particularly informative. Grief and guilt are impenetrable mazes through which it is almost impossible to navigate a way out of. Such single-minded obsessions as evidenced by Travis are impossible constructions.

“Looking down, I found my bare feet planted on the top riser of the floating staircase —only this staircase was a skyscraper, a monolithic finger jutting straight up toward the blackened, star-littered heavens, not wooden and pyramidal but golden and tubular, spiraling like a corkscrew.”