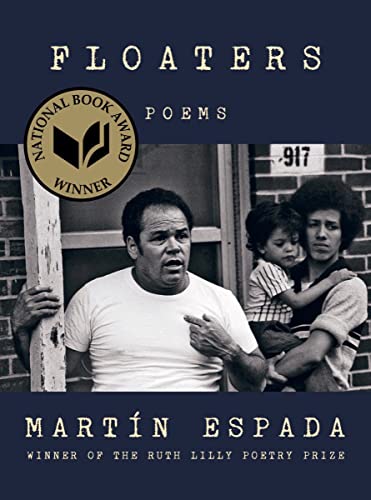 “seeing, feeling, remembering, transforming, articulating what was, what is, what could have been. If only.”

Unlike some of his many excellent poetry collections, Floaters, Martín Espada’s latest, feels, consciously, with intent, like a historic lyrical document. Like a moment in time, documented, analyzed, musicalized, remembered.

It is not a coincidence. The book functions in synergy with the strong influence of the poet’s father, Frank Espada, a documentary photographer, creator of the Puerto Rican Diaspora Documentary Project. Through that joint lens, the junior Espada’s poems gather images from childhood as well as from the aftermath of death and governmental neglect in Puerto Rico after Hurricane María.

Some of these prose poems seem almost like short videos. Others, like transcripts of conversations between father and son, like these stanzas from “Letter to My Father”:

“When I was a boy, you were God. I watched from the seventh floor

execution. A big man caught a small man stealing his car, and everyone

in Brooklyn heard a car alarm wail of the condemned: He’s killing me.

At a word from you, the executioner’s hand slipped from the hair

of the thief. The kid was high, was all you said when you came back to us.”

“I know you are not God. I have the proof: seven pounds of ashes in a box

on my bookshelf. Gods do not die, and yet I want you to be God again.

of paper towels sails away. Thunder Spanish obscenities in his face.

Banish him to a roofless rainstorm in Utuado, so he unravels, one soaked

sheet after another, till there is nothing left but his cardboard heart.”

“I promised myself I would stop talking to you, white box of grey grit.

You were deaf even before you died. Hear my promise now: I will take you

to the mountains, where houses lost like ships at sea rise blue and yellow

from the mud. I will open my hands. I will scatter your ashes in Utuado.”

Floaters owes its title to a term used by certain Border Patrol agents to describe migrants who drown trying to cross over.

“And the dead have names, a feast day parade of names, names that

See how they rise off the tongue, the calling of bird to bird somewhere

in the trees above our heads, trilling in the dark heart of the leaves.

And so, as with all things touching on displacement, on uprootedness, there are two sides to Floaters, or rather two ends, two extremes. On the one hand, Puerto Rico, Hurricane María, and even colonization (though not overtly) are part of the frame from which these poems hang.

On the other side, literally and figuratively, there is the hard immigrant task of belonging, which Espada seems to say can only begin after survival has happened, and adaptation has happened, and nostalgia has been translated into opportunity, as mirrored in the stories Espada’s father documented and Espada himself internalized. In the essence he transformed in order to record it here in verse, as in the poem to which the following lines belong, titled, “Flan”:

“At the end, I leaned over Jack’s bed to read his own poem in his ear, but some

words come home after the blackout, fingers crawling on the wall. I know

what I should have said at the Chinese restaurant: Jack, let’s get some flan.

We should have braved the subway at rush hour, straphangers rocking

all the way to 14th Street and 8th Avenue, to La Taza de Oro, gone now

like Jack, for rice and beans, squid in its own ink, café con leche y flan,

Jack: a spoonful of flan for you after all the years of sonnets and bread

for me, the steam rising when your hands cracked the crust at the table.”

But just like Espada can’t stop talking to his father, he also can’t stop talking to his readers. A delicious surprise of this book is a section with notes written by Espada about each one of the major poems in it. A behind-the-scenes, if you will, of the poet’s mind at work. A documentation of the documentation adding light to the tasks of poetry: seeing, feeling, remembering, transforming, articulating what was, what is, what could have been. If only.