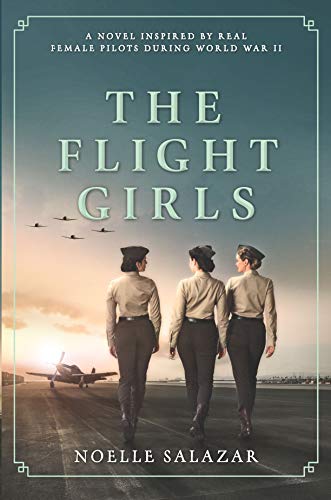 “If you’re the right reader, you’ll have a soaring experience. If you’re the wrong reader, it will be a crash landing.”

Those surface elements give the impression you’re going to get a historical novel about the Women Airforce Service Pilots. These underreported women ferried aircraft around the world in support of the Allied powers during the darkest time in modern history, which led to the freedom we take for granted today.

They “flew every plane the military possessed”: multi-engine bombers, single-engine fighters, and a mix-and-match of trainers. “Some of the aircraft were fresh off the production line, others beat up from battle and patched up to be tested before being returned to battle . . .”

A high-risk, highly skilled job that only the best pilots can handle, then or now. Often they hopped from one plane into a very different other in a single day, for days or weeks in a row.

That’s about all we learn about them.

By the time you realize this, you might wish you’d examined the package more carefully. That closer look at the cover and blurb reveals that The Flight Girls is actually a romance, put out by a romance publisher. From page one to the end, it proves to be little more than a contemporary YA romance thumbtacked onto a bulletin board of postcards bearing the names of historic planes and places.

Had the Author’s Note been put in the front matter instead of the back matter, it might help the wrong audience avoid investing hours of reading, only to be disappointed. The author makes it clear that realistically conveying the flight experience wasn’t her objective.

“While this is fiction,” she says, “there are moments of truth throughout, borrowed from the archives of these brave women’s lives . . .”

“. . . and from extensive research on the time period.”

Sorry, not enough research. The book contains multiple bloopers in period-appropriate vocabulary and facts, which throw knowledgeable readers out of the story. There are also some copyediting inconsistencies that would make a pro shudder.

The author continues: “My job is to paint a picture and my goal in telling this story isn’t to drown the reader in facts. It is not to impress with fancy words or my knowledge of flying (I am not a pilot and won’t try to write as if I know how to fly a plane. I’m actually a bit afraid of flying!). What I did set out to do is entertain you. To give you a bit of history. And to hopefully make you fall in love. With a time period. With a young woman trying to find her way in a changing world. . . .”

Okay, fair enough. That’s what’s the story is about.

Audrey Coltrane, privileged daughter of a wealthy oilman’s family, has been groomed all her life to be a society wife and mother—yet all she’s wanted to do since childhood is fly. She’s lucky to have a supportive father who helps her earn her wings early, and she parlays that experience into a flight instructor position in Hawaii.

There she trains young male pilots in the days when America was trying to stay out of the European war. That puts her right at Pearl Harbor when the Japanese attack, launching America into World War II.

Not surprisingly, Audrey is traumatized by the bombardment. She goes home to the mainland, recovers, then joins the Women Airforce Service Pilots program when the call for recruits comes.

During the lead-up to Pearl Harbor, Audrey meets James, the love of her life—though she denies this for several hundred pages because her only goal is to become an ace pilot then purchase the airfield she learned to fly at and make its development her life’s work.

But she and James, like thousands of others, get separated by America’s entry into the war. He is sent overseas into combat and ultimately goes missing in action. Audrey spends her wartime stateside with the women pilots, training to Army standards without ever being granted entry into the service and receiving its benefits.

Although we get summary paragraphs about the training and purpose of the world Audrey occupies, the bulk of her story is about her friendships with the other women, the dynamics of her family conflicts, and her wallowing in the angst of identity determination and unfulfilled love. Once James goes MIA, Audrey’s mission turns to finding and rescuing him.

We have to admire her loyalty and grit, which make her both a romantic and heroic protagonist. Unfortunately, her emotional development seems to have stopped in her teens. Except for moments of inspiration and enlightenment, which are the strongest parts of the book, she is persistently naive and obtuse.

Readers who keep turning pages hoping something interestingly airplaney will happen might be ready to slap her by the halfway point. In contrast, readers who love to experience feelings, over and over again from different angles, and who have struggled with individualism in a society that demands conformity, should be able to relate to Audrey’s troubles, desires, and goals.

Strong historical fiction incorporates character crisis into its time and setting. This book explores only one level, placing a character study against a blurry historical backdrop. In this regard the author has indeed achieved her goal of painting a picture that will “entertain you [and] give you a bit of history.”

Whether she succeeds at making you “fall in love” depends on who you are and what you expect from this novel. If you’re the right reader, you’ll have a soaring experience. If you’re the wrong reader, it will be a crash landing.