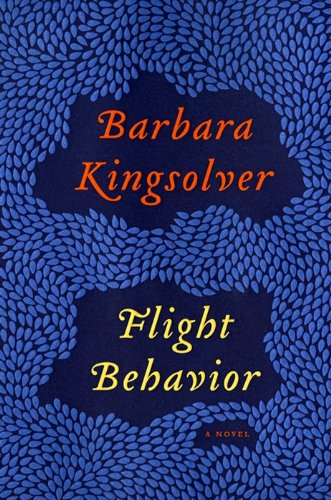 “Few writers can match Ms. Kingsolver for her turns of phrase.”

In stepping across into a fictional niche that is the usual domain of Anne Tyler and/or Jane Smiley (female protagonist wrestling with feelings of inadequacy mixed with dissatisfaction leading to a yearning for a Brand New Life), and mixing in a good many staggering and frightening facts describing the new normal of global climate change as revealed to us by Al Gore, Barbara Kingsolver in her new novel Flight Behavior, presents her reader with something of an inconvenient text.

Brimming with passion and crammed with well meaning, Flight Behavior is a novel that lingers in the memory as a study in two “icks,” as it is at once both didactic and pedantic, which, together, do not a successfully enjoyable novel make.

Were it a suitcase, it would cost extra to take the damned thing on an airplane given its excessive moral and emotional weight.

Granted, Ms. Kingsolver is attempting to pull off something that is all but impossible, making art out of science. But in grafting her story (echoes of which bounce through film and fiction of the last century: a miracle seemingly occurs, crowds gather, lessons are learned) to long passages of detailed information of the why and how and the horrid potential of “global warming,” she creates something less than readable, and in doing so, risks testing that old conundrum about the falling tree in the mythic forest that needs a witness in order to make a sound.

If, in trying so very hard to use her literary fame to educate and illuminate, she creates a book that is as hard a slog as this one, does her point get made?

Flight Behavior is the story of Dellarobia, an restless housewife in an unhappy marriage, the young mother of two children, an inhabitant of the Tennessee Appalachians for whom life is a rather grueling blend of crushing poverty, smug ignorance and petty cruelty.

Wanting to run away from her life and into the arms of the telephone man, she makes plans to meet him in an old hunting bind in the woods behind her house.

Rushing there (“She knew her own recklessness and marveled, really, at how one hard little flint of thrill could outweigh the pillowy, suffocating aftermath of a long disgrace.”), she comes upon that proverbial tree fallen in the forest:

“She smacked her palms together to shuck off the damp grit and viewed the corpse of the fallen monster. The tree was intact, not cut or broken by the wind. What a waste. After maybe centuries of survival it had simply let go of the ground, the wide fist of its root mass ripped up and resting naked above a clay gash in the wooded mountainside. Like herself, it just seemed to have come loose from its station in life.”

Rushing onward into the heart of the place, Dellarobia comes upon her miracle:

“The forest blazed with its own internal flame. ‘Jesus,’ she said, not calling for help, she and Jesus weren’t that close, but putting her voice in the world because nothing else present made sense. The sun slipped out by another degree, passing its warmth across the land, and the mountain seemed to explode with light. Brightness of a new intensity moved up the valley in a rippling wave, like the disturbed surface of a lake. Every bough glowed with an orange blaze. ‘Jesus God,’ she said again. No words came to her that seemed sane. Trees turned to fire, a burning bush. Moses came to mind, and Ezekiel, words from Scripture that occupied a certain space in her brain but no longer carried honest weight, if they ever hand. Burning coals of fire went up and down among the living creatures.”

These burning coals? These orange sparks? Monarch butterflies, who, disrupted by the loss of their native Mexican habitat because of logging, and confused by the warmer, wetter seasons in northern climes, have gathered by the millions in her forest, presenting “twisters of brightness against the gray sky.”

Forget about the telephone man. Forget about everything else once the bugs hijack the tale. It’s the butterfly book from here on out.

What evolves from here reads like something you have read before. Scientists appear to study the phenomenon. Brittle Barbied television reporters click clack across Dellarobia’s front porch balanced on four-inch heels to thrust video cameras in her face and Dellarobia learns fast that the camera loves her and her natural red hair.

Tourists come from the world over to view, even to worship, among the danaus plexippus. The poverty stricken owners of the forested land consider selling the site to loggers in order to avoid foreclosure. Amateur videos go wonderfully viral just when we need them to, allowing the truth to come out. And through it all, the weather continues to become increasingly bizarre, with unpredictable results.

Again and again throughout the narrative, Barbara Kingsolver drives home her point that we and we alone are to blame for the horrors of extinction, the vagaries of the climate and the increasing dangers it presents to our own survival, and we and we alone have the ability and responsibility to fix it.

But all too often her point is made through the sacrifice of readability and solid storytelling. Characters lack motivation, plot points come and go without pay-off, as do even major characters (Ovid, the hunky chief scientist who changes Dellarobia’s life and her viewpoint of the world, drives off out of our story in the camper he uses for site visits, apparently without ever looking back in his rear view mirror), and the author’s control over the material seems as spotty as Tennessee winter weather.

But nothing the author has ever written lacks for a sheer joy of words. Few writers can match Ms. Kingsolver for her turns of phrase.

As here, where the author, in glorious language, explores the core nature of her protagonist:

“Beyond all half-answers and evasions one question had persisted, since forever, and it was why. In Dellarobia’s childhood it plagued and compelled her, one word, like one silver dollar on the floor of a wishing well, begging to be plucked up but strategically untouchable. Unsatisfactory answers crowded the waters around it, she could measure her life in those: because you are too young, because it was his time, because it isn’t done, because I didn’t raise you to behave that way, because it’s too late, because the baby came early, because life is like that, just because. Because God moves, it goes without saying, in mysterious ways.”

Or these brief, brilliant descriptions, Ms. Kingsolver’s stock in trade:

“She’d seen the man’s face. Straining, neck veins and ligaments bulging. He looked like a tied-up horse in a barn fire.”

“Tina waited. Like a store mannequin, Dellarobia thought, with the waxy complexion and flower-stem posture.”

“The accused stood with his arm around his wife’s waist as if he did not mean to let go. They looked like two willow trees struck by lightning and fused.”

Or this moment, in which both the human response to climate change and the book’s title are considered:

“’I think people are scared to face up to a bad outcome. That’s just human. Like not going to the doctor who found a lump. If fight or flight is the choice, it’s way easier to fly.’”

Flight Behavior presents readers with choices: Do we sit by as casual, passive observers and watch the waters rise and the world burn? Or are we willing and capable of making decisions based upon the good of our planet?

A third one might be: Is a lesser novel—a preachy, even predictable novel—by Barbara Kingsolver better than no new novel at all?