Flavors of Sicily: Fresh and Vibrant Recipes from a Unique Mediterranean Island 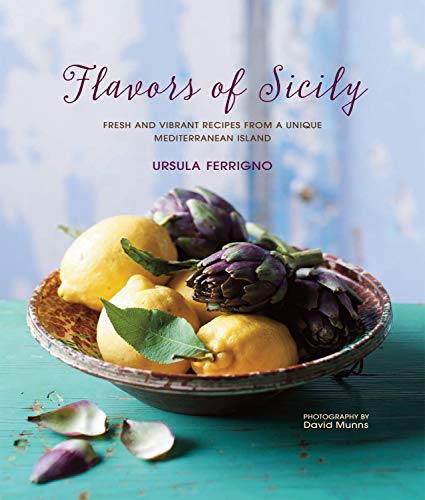 The first sentence of Ursula Ferrigno’s beautifully photographed Flavors of Sicily: Fresh and Vibrant Recipes from a Unique Mediterranean Island surely was the impetus for her ode to Sicilian flavors: “Sicily is an intriguing, beguiling place.”

That it is, and this reviewer’s own book on Sicilian cuisine Cucina Paradiso: The Heavenly Food of Sicily (Simon & Schuster) was likely inspired by the same enchantment that motivated Ferrigno. She writes that her first visit to Sicily was an eye opener. This is a sentiment many first time visitors have when reaching Sicilian shores as it is indeed an unique island quite separate from the rest of Italy.

The recipes Ferrigno brings us are, as promised, authentic, fresh, and vibrant.  Every recipe is accompanied by a mouth-watering photograph by photographer David Munns that, thankfully, looks real and not styled. In other words, there’s a good chance that if you make these recipes with a bit of care they will look like the photograph.

Although heavily weighted toward the inspired—but still authentically Sicilian--inventions of Sicilian restaurant chefs, there are enough recipes for traditional Sicilian home cooking and street foods and dishes to capture the flavors of Sicily.

Any book claiming the “flavors of Sicily” must have at least a handful of standard Sicilian recipes such as the fried rice balls called arancine, the chickpea fritters called panelle, the potatoes croquettes called cazzilli, the rolled stuffed meat called falsomagro, and the exquisite sarde a beccafico, the stuffed sardines “figpecker-style” and this book does; however, there are few recipes typical of popular home or baronial Sicilian cooking. The book is not, after all, an exploration of Sicilian cuisine but rather an introduction.

As for the “fresh” and “vibrant” part of the subtitle, the recipes are that and “fresh” means the kind of tweaking of Sicilian dishes one finds in Sicilian restaurants. There’s nothing wrong with that. The tuna carpaccio is a dish that would never be made in a home, but is a popular restaurant dish. There are some exceptions: although it probably tastes great, the pappardelle with duck ragout does not seem Sicilian at all and it’s likely that a dish from the Veneto snuck in.

Ferrigno makes no claim to providing a history of Sicilian food or of any deeper cultural understanding of food in the lives of Sicilian people outside of very brief mentions in some recipe headnotes and boxes. The point of her book—and here she succeeds—is merely to introduce the reader to some Sicilian foods through pictures and recipes. If you are the kind of cook who gets excited by reading the recipe, but if you are unable to visualize what a dish will look like let alone taste like without a photo, then Ferrigno provides an excellent guide to get started.

One of the characteristics of Sicilian cuisine is that it can indeed be simple but it can also be quite Baroque with complex, labor-intensive recipes. Ferrigno gives us a good selection of the former such as the asparagus, provolone, and mint skewers, a simple preparation of skewered pieces of cooked asparagus tips and provolone cheese that are lightly melted in a grill pan and then, as Ferrigno says enticingly, “anointed” with olive oil, mint, lemon and its zest.

Her own inventive recipes, such as the broad bean soup with lemon, mint, and pasta, are excellent and given with full respect to their Sicilian inspiration. As for the latter, more complex Sicilian dishes—the ones born in the kitchens of the monzu, the French-trained chefs of the aristocracy—such as timballo di Gattopardo, they are not found in Ferrigno’s book.

There are a few quibbles with the book, but these are minor and hardly detract from a book worth having. First, as beautiful as the book is, its very nature (a photographic introduction) leaves one wanting more. For that, a “suggested readings” or bibliography would have been helpful.

Second, the Italian proofreader seems to have missed a number of glaring mistakes such as olio do’livia (olive oil) instead of olio d’oliva. The non-Sicilian dish abbacchio alla cacciatovia is a mystery as “cacciatovia” is not a word.

Third, some entries are a bit precious: I laughed when I read the ingredient list in Pasta with Sardines that called for “open-textured, crustless sourdough-type bread, blitzed into breadcrumbs.” “Fresh breadcrumbs” would have sufficed.

Another complaint is that Ferrigno seems not to have settled on the story she would like to tell. Is it a cooking teacher and author relating her first experience of enchantment with Sicily? Or is it a nutritional one about the healthiness of the cuisine (but that might only be a sop to modern sensibilities)? Perhaps, it is the background of her father’s vegetable and fruit import business that underlies her interest in food. It seems we may have missed out on a story being told: In the headnote to Onions Baked in Marsala we read that “a firm friendship and tremendous respect has evolved from this encounter with Will and Val.”  This happened over olive oil . . . but who are Will and Val and why is olive oil so important here?

One must also question Ferrigno’s understanding of the history of Sicilian cuisine and culture. The impression left is that while it’s appreciative it is not deep. The reader would benefit had she told us more about the playfulness of the Sicilian cook, exemplified in the names of dishes.

For example, what is the meaning of the previously mentioned sarde a beccafico, (sardines, “figpecker-style”)? The book has a “gee whiz” feeling to it of a traveler who has been seduced by her fascination with the island.

There are a number of questionable assertions. Take for instance the recipe Sweet and Sour Pumpkin, which she identifies as a typical Sicilian dish from Catania that is a legacy of the island’s Byzantine past (with the nutritional afterthought that the pumpkin is rich in beta-carotene and its seeds are “full of zinc.”) This nutritional titbit is superfluous in an ode to Sicilian cuisine. However, this pumpkin preparation is not originally from Catania, has little to do with the Byzantine past, and is nothing other than the famous Fegato ai Sette Cannoli (“Liver of the Seven Spouts”) of Palermo which has an amusing history which Ferrigno seems unaware of.

The story behind the name of this dish is as interesting as the dish itself. There was once a street vendor who sold sweet-and-sour pumpkin with veal liver near the Garraffo fountain near Palermo’s Vucciria market. The Garraffo fountain had seven spouts, and he named the food he sold liver of seven spouts. But when veal became too expensive he dropped the costly ingredient but kept the fountain’s name. Another claim is that lemons and bitter oranges arrived in Sicily around A.C.E. 830. There is no evidence to support this date, which is far too early, although she is right that it was the Arabs who eventually brought these citrus fruit and she gives a short mention of their agricultural expertise.

All in all, if you are unfamiliar with Sicilian cuisine this enticing book will surely get you into the kitchen where you will indeed be introduced to the flavors of Sicily.