Flaming Zeppelins: The Adventures of Ned the Seal 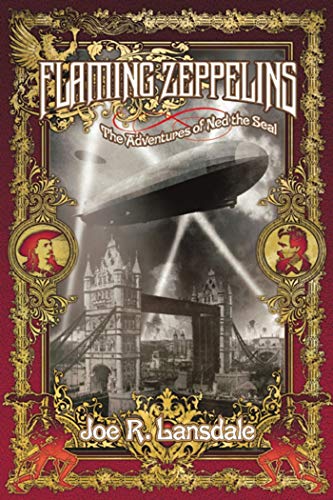 Flaming Zeppelins is a book in two parts—Zeppelins West and Flaming London—originally published as two separate books (soon to be three), and it winds up with something of a split personality because of it. The first part is crude, meandering, bizarre, and largely pointless except to introduce the character Ned the Seal and to have a lot of really weird fun with famous characters of the Wild West as if they’re toy soldiers—and forgotten just as quickly. The second part is much more successful as a cohesive story, and so is a much better read.

Both halves, however, gleefully mix real and fictional people and happenings from roughly the same time frame and throw them out into the world to have highly improbable adventures. In the beginning, during the first half, the book seems random, mostly plotless and entirely unnecessary, but during the second half, when the structure of time and space breaks down, it starts to look like the randomness of the first part was intentional. Was it all happening only because reality was breaking down? Was all of it even possible at all because of the tears in the fabric of space-time?

Who knows. Not the characters in the book, though they have their theories, and certainly not the reader. But the second half almost manages to redeem the first as it takes on War of the Worlds’ Martian walkers and invasion and The Time Machine’s reckless scientist while London burns.

Really, only the first part is overtly Steampunk as it is billed; the second has a giant steam-powered man, but he’s more of a trapping and the only example, surrounded by sleek Martian advanced technology. The Zeppelin of the title doesn’t have much to do either and isn’t there after only a short few pages.

Shuttling between a serious sci-fi novel and a ridiculous farce, sometimes in the same paragraph, the book as a whole feels like it could have used some streamlining and cohesiveness—or that the entire first half could have been cut off and left somewhere where no one needs to see it, and the second could have been expanded a little into a book in its own right.

And since the book is a mixed bag, so is this review. Ned the Seal was charming and sweet, and his adventures were exciting; all the Wild West characters were pretty much terrible people and tended to be annoyingly juvenile to read, but the aging Jules Verne and Mark Twain were pretty lovely and were a good choice to save the world. The less said about Doctor Momo and his Island, the better.

If you’re a fan of Lansdale’s other work, you’ll likely like this one, too. If not, or if you’ve never read it before, it will take a lot of getting used to. It’s not a long read, and it’s certainly not a heavy one. It’s even honestly enjoyable in many parts. It’s just that the irritating parts are just as plentiful. Read it for the fun, but don’t expect highbrow humor or severe scientific realism. Read it as a string of drunkenly-told tall tales and crazy yarns, and it’s a much more enjoyable ride. Maybe it would have worked better with the original publications’ illustrations.