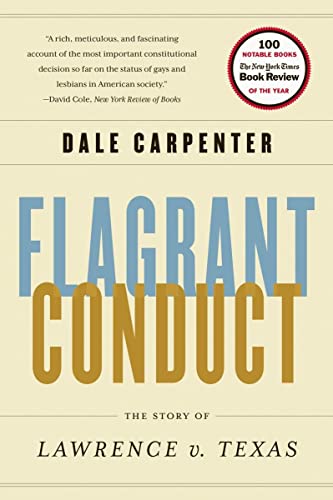 “In Flagrant Conduct: The Story of Lawrence v. Texas, Dale Carpenter takes readers through the maze of the judicial system with ease. The reader knows the outcome, yet the author spins the tale with grace—as would any good lawyer. Can a legal case challenging the laws against same-sex marriage be far behind?”

Lawrence v. Texas, the Texas case that decriminalized sodomy, has been called the gay Brown v. Board of Education.

This is no real surprise as both cases used the same legal reasoning.: It is unconstitutional to treat Americans differently, whether based on the color of their skin or their sexual preference. Dale Carpenter has written a very readable account of the Lawrence case. A short history of the city of Houston, helps provide background of the why her and why now. He reveals some surprising facts.

1. Lawrence and Garner were not a couple.
2. There is a legitimate question of whether or not the law was broken.
3. There never was a trial.

The facts of the case are nicely laid out. Robert Eubanks was drunk and upset with his boyfriend, Tyron Garner—not an unusual situation. Eubanks and Garner were in the apartment of a friend, John Lawrence. Eubanks called police at 10:49 P.M. on September 17, 1998, to report that a black man (Garner is an African American, Eubanks and Lawrence are white) was “going crazy with a gun.”

When four Harris County sheriffs deputies entered the second-floor apartment, there was no obvious source of the complaint. Deputy William Lilly (an African American) checked a bedroom with Deputy Joseph Quinn (white) directly behind him. Lilly reported he “saw two men having sex.”

He lurched back from the doorway. Quinn, seeing him fall back, guessed that Lilly had been surprised by the gunman. When Quinn entered the bedroom, he reported that he saw two men having sex “well in excess of a minute.” The officers’ accounts differ as to whether it was oral sex or sodomy, both illegal under Texas law. When Lilly was interviewed for the book six years later he said he “honestly can’t recall” which it was. Quinn was sure it was sodomy. The other two deputies played only a small part in the case.

Since Quinn was the “priority unit” at the scene, it was his call whether or not to charge the men. He called the assistant district attorney to see if the Homosexual Conduct law said anything about the location of the offense. It did not. Quinn could have issued a citation and left. If that happened the men would pay a fine, and Lawrence v. Texas would have never happened. Quinn decided to take the men to jail, he said, “because of the totality of the circumstances. . . . It was a lover’s triangle that could have gotten somebody hurt. I could have killed these guys over having sex. They were stupid enough to let it go that far.”

Carpenter discusses the police attitudes toward both race and sexuality in the police department of Harris County and comes to the conclusion that the police brotherhood is the strongest bond.

John Lawrence did not like the police coming into his home, and thought the police acted like storm troopers. No doubt his obscenities directed at the police played a role in their decision to arrest the two men. But unlike most men arrested for sodomy, Lawrence did not want to pay the fine and just go home. He poured out his troubles to a local gay bartender who knew someone, who knew someone, and that’s how Lambda got involved.

It’s not clear what happened in that apartment that night. When Garner and Lawrence were interviewed with their lawyer from Lambda she said “Okay Tyron we don’t want to talk about specific details about what was going on or not going on.” The implication was if nothing was going on, the officers made it up, and there was no case.

Lambda counseled the men to plead no contest, avoiding a trial and also ensuring the case did not end there. The Lambda defense was that the Homosexual Conduct law made it a crime for two people of the same sex to have oral or anal sex, but it was not illegal for persons of different genders, to do the same thing equal protection rights were violated, and that was unconstitutional. Their appeal to the Texas Court of Criminal Appeals based on privacy and equal protection was denied. And, as Lambda hoped, this was the civil rights case that went to the Supreme Court.

In June 2003, in a 6:3 decision, the Supreme Court declared the Texas law unconstitutional. Justice Anthony Kennedy, writing for the majority, held that the right to privacy protects a right for adults to engage in private, consensual homosexual activity.

In Flagrant Conduct: The Story of Lawrence v. Texas Dale Carpenter takes readers through the maze of the judicial system with ease. The reader knows the outcome, yet the author spins the tale with grace—as would any good lawyer.

Can a legal case challenging the laws against same-sex marriage be far behind?